Fantasy Baseball September 5 Round Up: Albert Pujols Gets Closer to 700 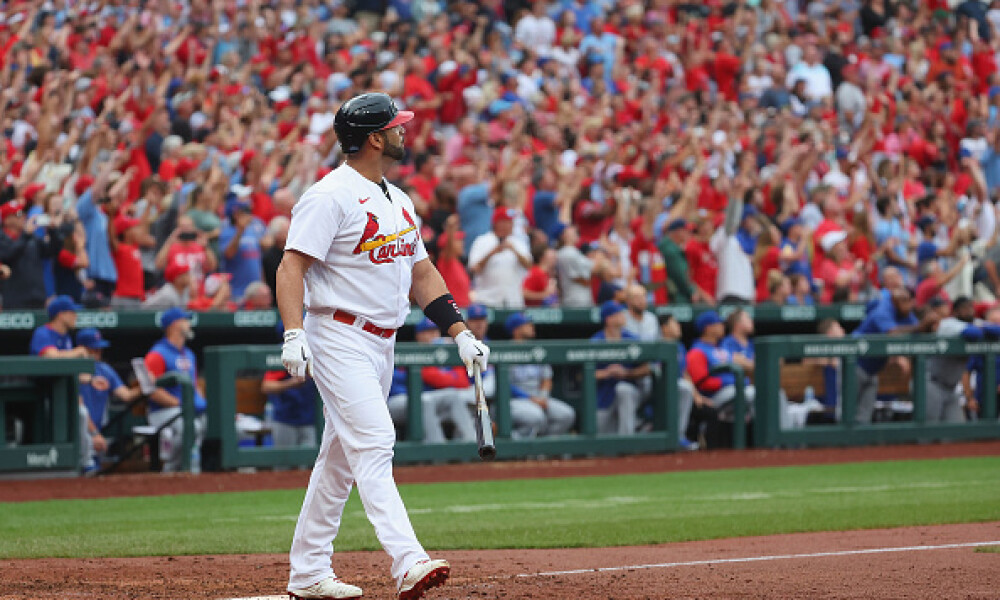 All Rise as Yankees slugger Aaron Judge hit his second home run in as many days against the Rays to raise his total to a career-best 53 homers and lead his team to a much-needed 2-1 win in the series finale. He is now just eight home runs from tying Roger Maris' 1961 franchise and American League record of 61 homers in a season and that puts him on pace for a season total of 64.

Future Hall of Famer Albert Pujols smashed #695 in the eighth inning- a pinch hit HR as well- to lead the Cardinals to a 2-0 win over the Cubs. Pujols trails only Barry Bonds (762), Hank Aaron (755), Babe Ruth (714) and Alex Rodriguez (696) on the all-time home run list and nothing could be better for baseball to see him reach that magical number of 700.

Zac Gallen is one of those pitchers that flies right under the radar but is a darn good pitcher. Yesterday he tied a major league record with his sixth straight scoreless start and proceeded to push his scoreless innings streak to 41 1/3. Gallen's streak is the eighth longest in the Live Ball Era (since 1920). He is the fourth AL/NL pitcher in the Modern Era (since 1900) to throw six or more scoreless innings in six straight starts, joining Don Drysdale (1968), Orel Hershiser (1988) and Zack Greinke (2015). Not bad company to be around.

On another note, Zac Gallen & Merrill Kelly are the Diamondbacks first back-to-back Pitcher of the Month winners since Randy Johnson & Curt Schilling in 2002. Once again- not bad company to be around. The future is getting brighter in Phoenix.

Last night, Carlos Rodón was in a zone. He pitched 6 strong innings, gave up NO runs, and struck out 10. After that 10th strikeout, Rodon moved over the 200 K mark for the season and became only the sixth southpaw in Giants history to have struck out 200+ in a season.

The Yankees Andrew Benintendi suffered a broken bone in his right wrist on a swing on Friday night and it will now require surgery, possibly keeping him out for the rest of the season.

The outfielder will meet with doctors in New York today but with a six-to-eight-week recovery process, it seems unlikely he’ll be able to return unless it is late in the playoffs. Since being acquired from the Royals at the trade deadline Benitendi’s numbers took a dip as he slashed .320/.387/.398 in KC but only .253/.331/.404 in New York.

Was that a Oneil Cruz Missile?

Wow! This kid can hit a baseball hard. Last Wednesday, Oneil Cruz hit a baseball an incredible 122.4 mph off the bat, the hardest hit ball since Statcast’s inception in 2015. The ball was hit so squarely that it did not reach a high enough launch angle (17 degrees) to get over the fence at PNC Park. Yesterday he may not have hit it 122.4 but still 115.8 mph is pretty darn explosive and this time he was able to get it over the fence.

Rays ace Shane McClanahan played catch yesterday for the first time since skipping his Tuesday start due to a left shoulder impingement and receiving a cortisone shot. According to the Tampa Bay Times, Rays manager said that the lefty “felt great…. and like I said, he’ll be back very soon.” McClanahan is eligible to return Sept. 15, the last day of the trip to Toronto as the Rays try to keep a hold on the top AL Wild Card spot. McClanahan is having a Cy Young-like season with a 11-5 record and 2.20 ERA/0.86 WHIP plus 182 strikeouts in 147.1 innings pitched.