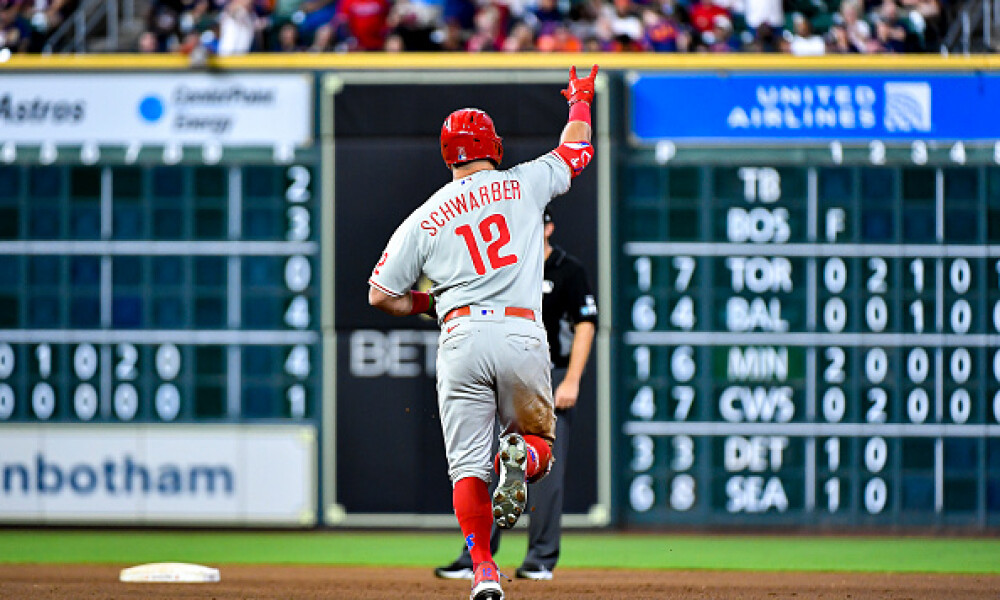 The 2022 MLB playoff picture is set, at least in terms of the teams that will be competing for the World Series title. There’s still some jostling for seeding in the American League and National League, but we know the teams that will be in the postseason. Kyle Schwarber’s 45th and 46th home runs of the season helped the Philadelphia Phillies clinch its playoff berth yesterday. Meanwhile, Tyler Glasnow looked dominant once again and could give the Tampa Bay Rays an elite arm for its opening playoff matchup. Additionally, Luis Severino was pulled during a no-hitter and while he didn’t make history last night, Aaron Boone and the New York Yankees need a dominant Severino in the postseason. Outside of the postseason news, Hunter Greene and Jesús Luzardo capped off solid seasons with excellent starts on Monday. We also had Bryan De La Cruz continued his hot streak. As we look ahead to Tuesday’s baseball slate, I’ll give you my MLB best bet which involves an NL Central squad. Plus, the question remains: Is today the day that Aaron Judge hits his 62nd home run? Let's dive into the biggest MLB news and fantasy baseball headlines in today's Round Up!

Last night’s two home runs might be too little too late for Schwarber to get to 50 by season's end. Still, he’s currently at 46 home runs, which is easily a career-high for him despite a measly .219 batting average. Though the batting average hasn’t been there for Schwarber, it’s hard to argue with the 46 home runs, 94 RBI, 100 runs scored, and career-high 10 stolen bases he put forth this season. Schwarber and Judge are the only players in Major League Baseball this season with 40+ home runs and 10 or more stolen bases. In fact, Schwarber is one of just four players (Judge, Mookie Betts, Shohei Ohtani) with at least 30 home runs and 10 stolen bases. Batting average aside, it was a great year for Schwarber from a statistical perspective. Plus, his homers yesterday helped the Philadelphia Phillies clinch a Wild Card berth.

What are we going to do with Hunter Greene? The strikeouts are legit, but his home park in Cincinnati stinks for pitching and makes his HR/9 worse than it actually is. Regardless, when it comes to 2023 fantasy baseball drafts, we know what we are going to get with Greene. His ERA will likely be slightly inflated, due to his home park, and his arsenal may lend itself to some hard contact. Still, the Reds pitcher has an electric fastball and while it didn’t show yesterday, his slider is an elite out pitch. Over his final seven starts of the year, Greene was terrific – posting a 1.79 ERA, 0.94 WHIP, and a 57:11 K/BB ratio across 40.1 innings of work. His potential and upside is going to move him up in fantasy baseball drafts next season, but he’s a legit strikeout arm that will push for 200+ strikeouts in 2023 if he gets to 160-170 innings of work.

With the postseason looming in the coming days, Aaron Boone pulled Severino after 94 pitches, despite the fact that the New York Yankees starter had not allowed a hit over seven dominant innings. Last night was just Severino’s third start since returning from a nearly two-month stint on the Injured List. Plus, the last time he logged 94 pitches in a start was all the way back on June 24th! The Yankees desperately need a dominant Severino if they want to make any noise in the postseason and to Boone, Severino’s next start is far more important than another inning or two for history against a Rangers team that is nearly 30 games under .500.

Make what you will of the decision, but Yankees fans should be ecstatic about this performance heading into the postseason. If Severino has this sort of confidence and moxie, watch out!

When Luzardo pitched for the Miami Marlins this year, he was excellent with a 3.32 ERA and 30% strikeout rate over 100.1 innings of work. He missed a good chunk of the season due to injury but despite a 4-7 record, he showcased that frontline rotation stuff on more than one occasion. Luzardo's 12 strikeouts last night tied his season high and all four of his pitches posted a whiff rate of at least 33% last night – headlined by his curveball’s 60% whiff rate. If Luzardo can stay healthy, he could be an excellent fantasy baseball asset for seasons to come. However, this is the first time in his career he’s logged more than 100 innings at the big league level – so we may not see more than about 145-155 innings next season.

On the offensive side of the ball, Bryan De La Cruz is ending his 2022 season on a very high note. He went 3-for-4 yesterday with a home run, a double, three RBI, and two runs scored. De La Cruz has hit safely in 12 of his last 15 games and during that stretch, he’s slashed .407/.419/.746 with four home runs, nine runs scored, and 17 RBI. An impressive end to the season may help his fantasy baseball draft stock come 2023.

Glasnow won’t be ready for a full workload in the playoffs, as he will likely be capped around 80 pitches in his next start. Still, he looks as dominant as ever and his presence will be a massive boost for the Tampa Bay Rays as they look to make a run in October. In two starts since returning from injury, Glasnow has allowed just one earned run on four hits while posting a 10:2 K/BB ratio across 6.2 innings of work. In his seven-strikeout performance yesterday, his curveball generated five whiffs on seven swings and his fastball topped out at 98.9 miles per hour. If he’s on, good luck to the opposition. I mean, to be blunt, how the $*%& do you hit these!?

The Cubs may not have the most prolific batting average as a team against righties of late, but Great American Ball Park should play them up a bit. Plus, Cincinnati Reds pitcher Luis Cessa has a 6.75 ERA and 1.66 WHIP at home this season. Willson Contreras and Ian Happ have homered off Cessa previously in their careers, and righties have had better success against Cessa this season. When looking at Chicago’s lineup, outside of Ian Happ, and Esteban Quiroz, the most potent bats are of the right-handed variety. Let’s go with the Cubs putting some runs on the board today!