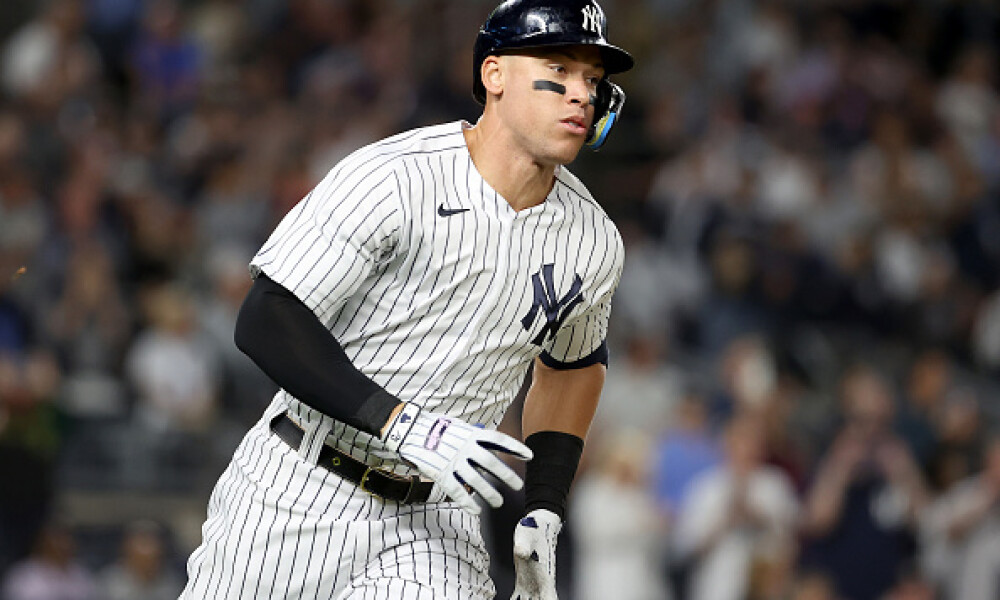 Week 25 of the Major League Baseball season is now a wrap and there are only three days left in the 2022 regular season. Before closing the door on the week and looking ahead to October postseason baseball, we need to first look back at the top fantasy baseball news and headlines from Sunday’s MLB games. Yesterday’s action was highlighted by tons of MLB playoffs implications and magic numbers. The Atlanta Braves swept the New York Mets, the San Diego Padres clinched a postseason spot, and the Philadelphia Phillies are one step closer to a Wild Card berth. The name everyone is still paying attention to, though, is Aaron Judge as he attempts to win the AL Triple Crown and hit one more homer in this final week. If you're still playing in your fantasy championship or playing MLB DFS lineups, check out our MLB daily projections, the MLB injury report, and MLB starting lineups. Let's now go back and look at Sunday's MLB top performers and baseball news before we start another fantasy baseball week.

Aaron Judge already has the RBI and home run portions of the Triple Crown easily locked up, but the final piece is not coming that easy – especially when he is not exactly seeing good pitches to hit. With three days remaining in the 2022 season, the New York Yankees outfielder currently trails Twins utility man Luis Arraez (.315) by four points for the AL batting average lead. Judge will will need to surpass him to grab baseball's second Triple Crown since 1967.

Since September 22nd when the Yankees opened a series against the rival Red Sox, Judge is batting .192 with just one home run and two RBI. However, he has an on-base percentage of .523, as he has been walked 17 times in 44 at bats. With the way he is being pitched around, four points is a lot to make up as Judge only has four games left in three days as the Yankees visit the Rangers to end the regular season. We'll see if Judge can join Miguel Cabrera this week.

It has been an incredible up-and-down season, but Matt Olson must finally feel like he “belongs." The Atlanta Braves first baseman started out on fire and then suffered through a horrendous career-worst slump from mid-August until last week where he slashed only .165/.246/.291 on 142 plate appearances. After being benched for a day on September 24th against the Phillies, Olsen woke out of his slumber and proceeded to hit five home runs during last week’s six games. That includes three straight against the Mets as the Braves swept their NL East rival over the weekend. It seems like it was just yesterday when the Braves' magic number was seven. Well, today they wake up to it only being one! All it takes is a Braves win or Mets loss over the next three days and Atlanta is your NL East champion once again.

The Padres will be playing playoff baseball! With the Brewers’ 4-3 loss to the Marlins the Padres secured a spot in the postseason for the first time at home since 2005 and first full-season playoff berth since 2006. The Padres did make the playoffs in the pandemic-shortened 2020 season in front of no fans at the ballparks and were swept 3-0 by the eventual World Series champion Dodgers in the NL Division Series.

After Sunday’s rain-shortened win in Washington and the Brewers’ 12-inning loss at home to the Marlins, the Phillies need to win only once in Houston (or a Milwaukee loss) to clinch a playoff spot. It isn’t as easy as it sounds, though, as they will be facing the Astros’ top three starters with Lance McCullers Jr., Justin Verlander, and Framber Valdez lined up for this final series. The Phillies now have baseball’s longest active playoff drought (the Mariners have clinched a spot in the AL), but this series will not be easy. Even though the Astros won’t host Game 1 of the American League Division Series until Oct. 11, manager Dusty Baker has said that he intends to play his regulars this week to keep them sharp.

The Mariners plan to activate Julio Rodríguez just in time for tonight’s game against the Tigers. Rodriguez has been sidelined by a lower back strain, and though the injury wasn’t serious, the Mariners felt an IL stint was necessary for the “future of the franchise” due to lingering issues with the back. Even though they were in the middle of a playoff race the gamble and caution paid off as the Mariners still clinched a Wild Card spot and their star got some needed rest to his back. The AL Rookie of the Year favorite has slashed .280/.342/.502 with 27 HR, 73 RBI, and 25 steals and now has a chance to grow his legend as the postseason awaits.