Fantasy Baseball May 9 Round Up: Juan Yepez, George Kirby and Alek Thomas Are the New Names to Know 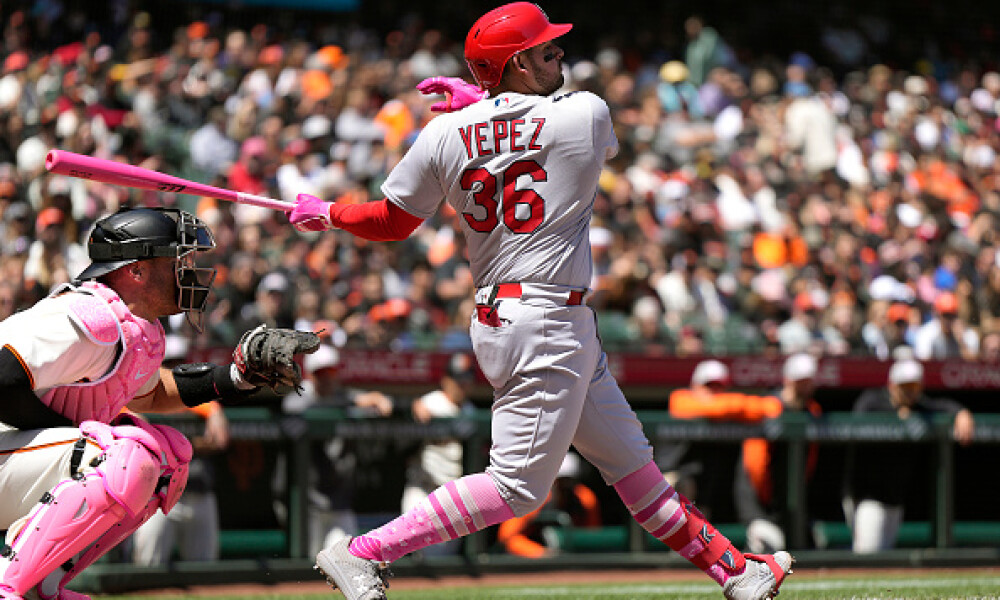 This was another big weekend in fantasy baseball as we continue to see the emergence of young talent. Your fantasy baseball waiver wire was likely a hotbed of activity Sunday night and if you missed out on some of the big names, there are still plenty of guys creeping up the fantasy baseball rankings and flying under the radar. If you find yourself slow to the waiver wire pickups, you better start busting out that fantasy baseball trade analyzer and see about making some deals. With the new CBA in place, we’re seeing a lot more veterans on shorter leashes and a lot more MLB rookies being called up. Don’t be the one to miss the boat as you’ll end up sitting at the bottom of your fantasy baseball league standings.

Welcome to the big leagues, Juan Yepez. As the veteran Cardinals bats like Corey Dickerson and Albert Pujols continued to struggle, the team opted to bring up the 25-year-old and inject some life into this lineup. Having nothing left to prove at the Triple-A level, Yepez responded immediately with seven hits in his first four games, including three doubles, two runs scored and one RBI. He continued his onslaught Sunday when he drilled his first home runs and enjoyed his fourth multi-hit performance over his first five games. Yepez showed some burgeoning power back in 2021 when he hit 25 doubles and 22 home runs, while maintaining a .289 average and .382 OBP, so the performance shouldn’t be too surprising. His plate discipline in the minors has been strong over the years, so expect him to stay up with the big club for a little while, if not for the rest of the year. It’s not like Dickerson or Pujols or even a guy like Paul DeJong (when Nolan Gorman finally arrives) should be standing in his way.

Is Alek Thomas Worth a Fantasy Baseball Waiver Claim?

With catcher Carson Kelly on the injured list with an oblique issue, the Diamondbacks are going to move Daulton Varsho from center field to behind the plate full-time, which opens up some playing time for former second-round draft pick Alek Thomas who was just called up over the weekend. There is mild power upside here, but while he’s swiped a few bases here and there, he’s been caught stealing almost just as much, so hedge your expectations here. Kelly suffered a Grade-1 strained oblique which is considered the lowest level of injury, so Thomas may not be up for too long. If you’re just looking for at-bats for the short-term, he’s worth a nod, but be ready to let him go just as easily if/when the cold streak arrives.

George Kirby Arrives in Style for the Seattle Mariners

We gave you the heads-up in Friday’s Daily Fantasy Baseball Round Up and I even threw his name out in my latest column in the New York Post, so wondering why you missed the boat on Mariners right-hander George Kirby comes as no one’s fault but your own. With the demotion of Matt Brash, Kirby became the hottest new name inside the Mariners’ farm system and it sounded like his promotion was imminent. And it was as he debuted Sunday with six scoreless frames in which he scattered just four hits and struck out seven. He was slick and efficient, needing just 81 pitches to complete the six innings and, at one point, retired 10-straight batters. He leaned pretty heavily on his four-seam fastball, but was also string in dropping in both his slider and his curve. He’ll be a string add for the next couple of starts, but be very careful as we’ve seen guys like Brash and Hunter Greene – young studs with spectacular debuts – get tagged by big-league hitters making the proper adjustments. How Kirby reacts to those adjustments will likely determine the length of his stay in the Mariners rotation.

When Will Max Meyer Be Called up By the Miami Marlins?

We don’t have any clue, but since so many MLB prospect junkies keep asking, we thought we would address the possibilities. As it stands right now, there is no imminent plan to bring Meyer up form Triple-A, despite the 1.72 ERA and 39 strikeouts over 31.1 innings. He’s got a fantastic fastball-slider combination, but he’s still working on his change-up and two-pitch pitchers rarely work out beyond a couple of starts at the big-league level. While Elieser Hernandez continues to struggle, the talk to bring up Meyer will remain abundant, but it sounds like he still has more work to do in the minors. The Marlins could add him to their bullpen mix, but that’s not going to help much in fantasy baseball unless he starts to accrue saves and we aren’t hearing anything off the sort. Just chill on the promotion here and be patient. It just doesn’t sound like we’re close, but as soon as we hear more – I’ll bring him up to Jim Bowden on the show and investigate further – we’ll let you know.

It’s been quite the month of May for Tampa Bay Rays outfielder Manny Margot as he is batting .464 (13-for-28) with two doubles, one triple, three home runs, 13 RBI and two stolen bases during this current eight-game hitting streak. Fantasy baseball owners have been waiting for a stretch like this as Margot’s power/speed combo was always something we had been waiting to watch develop. Can we say he’s arrived? Hard to tell, really. He’s 27-years-old right now so that sits right in his physical prime, but determining whether this is just a nice run or an actual development is hard to tell. You, obviously, have to give him a shot, but once this current streak comes to a close, his ability to bounce back and start hitting again is going to be what we need to see. I would suggest cautious optimism. It’s nice to see, but expecting this to be the norm after watching five years of struggles is what causes people to hang on too tightly to players which results in a number of wasted at-bats that simply negate all the good he’s done.

Carlos Correa Will Not be Ready by Tuesday

The Minnesota Twins got some great news last week when it was learned that Correa did not suffer a fractured finger. It is just bruised and, as such, he will not need a stay on the 10-day injured list. However, it is very likely that he also misses a lot of this week. He’s already been out for the entire weekend and the team does not feel like he will be ready for their next game this Tuesday. He’ll take some dry swings on Monday to see where he is at, but the team feels like a few more days are needed. Recent call-up Royce Lewis will continue to get some big-league at-bats while Correa is out.

Buxton owners seem to be dodging yet another bullet as the Twins are saying the outfielder is just day-to-day after being removed from Saturday’s game with a hip strain. They’re actually calling it “tightness” more than they believe it’s an actual strain, but we’ll just have to wait and see. Given Buxton’s history, I will reiterate that the clock is ticking and every little injury that crops up is just one step closer to his declining trade value. Hold him if you like, but don’t come crying to me when it’s gone.

Yoán Moncada Expected to Be Activated from IL by White Sox

We thought this was coming last week, but we’ll happily take it here. According to manager Tony LaRussa, Moncada should be activated ahead of Monday’s game which means you need to get him into your lineup. We’re very much aware of Moncada’s power abilities. What we want to see is this new slimmed-down version and if he really is going to go back to stealing bases like he did back when he was in the Red Sox farm system. If he truly does start stealing bases, he’s going to become a very valuable asset in fantasy. I’m not expecting some 20-30 steals, but if he can give us 10-15, it would be huge.

While the Braves cooled off the Brewers bats over the last two days, Milwaukee heads out for a three-game set at Great American Smallpark and get to take on a Reds team they outscored 34-12 over a three-game set just last week. Yes, the Reds are getting back Luis Castillo today, but we’ve seen Castillo struggle early in the season before, not even taking into account that he’s been rehabbing a shoulder injury. There’s too much juice on the money line right now, though if it drops to -160, I would jump on it, but I’m still fine picking on a Reds bullpen that’s been overworked and has a 6.30 ERA over the last seven days. Oh yeah, and we’ll double-dip against the Reds here, but only because they’re whiffing 26.4-percent fo the time against righties this season.

Save for one game against lefty Steven Matz on Buster Posey Day in San Francisco, the Giants offense has been struggling as of late. In fact, remove that 13-run explosion that was more about Matz’ struggles than they were about Wilmer Flores’ power, and the Giants have scored just eight runs over a five-game stretch. Now, no one is screaming Austin Gomber is the greatest pitcher as we’ve seen him struggle before in the past, but the young righty has thrown three-straight quality starts and has 20 strikeouts over his last 18.2 innings. Matching up against Carlos Rodón should help elevate the kid’s performance and given the Giants’ middling performance against right-handed pitching, we’ll back Gomber tonight. Sort of. It’s not like I think the Rockies bats are going to hit up Rodon, so let’s look at the run total tonight.