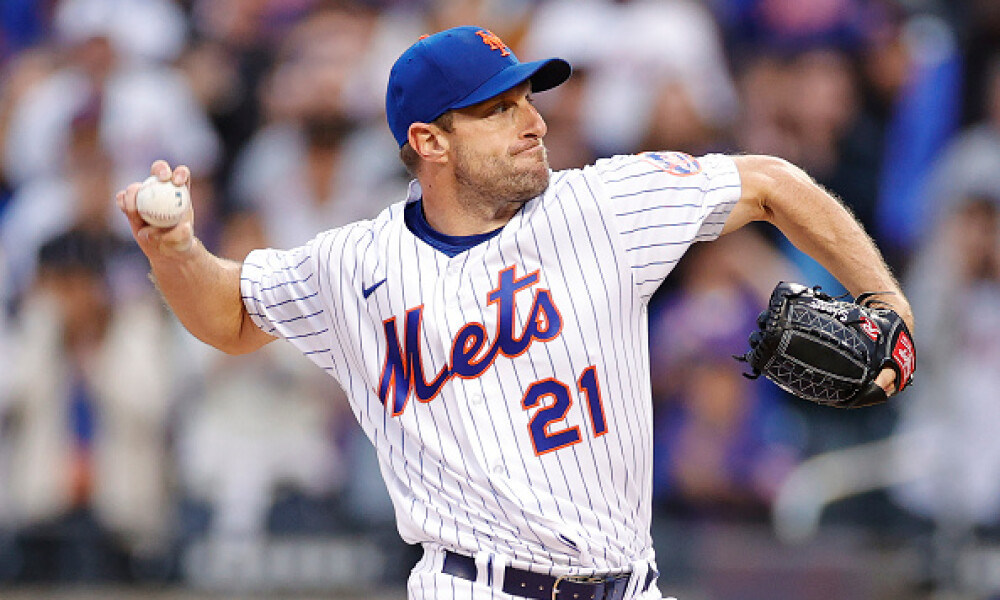 Fantasy baseball injury reports are going to be littered with questions regarding Max Scherzer’s early exit Wednesday due to discomfort in his side. If you missed it, Scherzer turned to the dugout with two outs in the sixth inning and a 1-1 count on Albert Pujols and signaled that he was done. He said he, “just felt a zing on my left side and just knew I was done.” Sounds like a possible oblique issue or something muscular in the intercostals. Not something Mets fans nor Scherzer’s fantasy owners wanted to hear. He’ll have an MRI on Thursday and we’ll have a better idea as to how long he is going to be sidelined, but you should definitely expect some sort of stint on the injured list. There is no point in speculating the severity of the injury or how much time he could miss. We’ll get the full story at some point today.

UPDATE: The Mets are calling it a moderate-to-high oblique strain and Scherzer is now expected to miss the next 6-to-8 weeks. This will obviously extend Trevor Williams' stay in the rotation and the team is going to have to dig through the farm system to find some additional help. No word on who it might be just yet, but regardless, this is a big hole to fill and it's doubtful one call-up is going to fill it.

Toronto is reporting Gurriel’s early exit Wednesday was due to tightness in his hamstring, but it’s been difficult to see exactly how or when he injured himself. He was replaced by Raimel Tapia in the sixth inning and, we assume, he will be headed for some tests Thursday morning. Gurriel has had hamstring issues before, so this isn’t something new. Keep tabs on it and we’ll see what the ultimate diagnosis is, but you may want to prepare for a replacement now just in case. A stint on the injured list, even a short one, seems plausible here.

This is more of a deep dive for fantasy owners as Sosa only serves as a part-time infielder for the St. Louis Cardinals. He was seeing a slight bump in playing time thanks to the struggles of Paul DeJong, but came up limping after a stolen base attempt in the fifth inning. He stayed in the game for a little longer, but was promptly removed the following inning and replaced by Tommy Edman. We were hoping the Cardinals would look to bring up Nolan Gorman and move Edman over to shortstop, but according to Jim Bowden, who spoke with Cardinals President of Baseball Operations John Mozeliak, the team is not interested in downgrading defensively in the middle infield. Maybe this changes if Sosa needs a stint on the injured list, but for now, we’ll sit and deal with DeJong and all his shortcomings.

Late in September of 2021, Paddack missed some time with a UCL sprain, so when he began to deal with elbow inflammation and a drop in velocity during his last start, red flags went up in a hurry. The test results came in and Tommy John surgery jumped right back on the table. It’s the second such procedure for Paddack who missed the entire 2017 season with the same issue and he’ll now miss the rest of 2022 and at least the whole first half of 2023. It’s a tough break for the 26-year-old and the Twins who now have to turn to Devin Smeltzer for some fill-in work.

While Snell was topping out at 95.8 mph on his fastball and looked pretty good in a lot of ways, some early command issues forced his pitch count to 84 in just three innings and cut his night pretty short. In addition to the three hits allowed, Snell issued three walks and struggled to get himself out of the jam as two of those walks came around to score. Obviously, this is just the first outing, but keep a watchful eye on his performance. The Padres pushed both MacKenzie Gore and Nick Martinez to the bullpen to keep all the starters on their normal five-day rest, but should we see any additional struggles or issues, the team could opt for the six-man rotation. That would probably benefit Gore more than anyone, but we’ll just have to wait and see.

In the realm of buy low sell high fantasy baseball, we’ve got to take a look at Lopez and his failure to go beyond the third inning against the lowly Nationals on Wednesday. We don’t want to send out any sort of panicky message, but as I stated in these pages before, Lopez was someone we needed to keep an eye on, given his past shoulder issues. Adam Ronis and I have also mentioned it on the Ante Up podcast. The numbers for the 26-year-old right-hander have been outstanding with four wins, a 1.57 ERA, a 0.91 WHIP and 48 strikeouts over 46 innings. However, last year, Lopez dealt with shoulder issues and we had some concerns as to whether or not they would crop up again. We’re not saying there is a problem right now but like any sell-high candidate, any poor outing is going to hurt his trade value. This was the second time in four starts that Lopez failed to pitch past the fifth inning and he now has seven walks over that span as well. Command issues? Maybe. The numbers still look fantastic, but hopefully he bounces back next week and gives you another opportunity to sell at peak value.

Though he didn’t make our official MLB Draft Guide list of fantasy baseball sleepers, Walsh was someone we talked up throughout the spring for those who missed out on the top-tier first basemen in their drafts. Even with a 29-homer season under his belt, the lefty slugger managed to stay under the radar and was more of a seventh or eighth-round option. Some added him as their primary, though many did add him as a corner infielder to lock down the power. A slow start to the season has kept his fantasy baseball profile relatively low, but a two-homer game like he enjoyed last night will certainly divert more eyes his way. He is now slashing .248/.309/.460, but those numbers are on the rise, just as his eight home runs and 26 RBI are as well. He could be a solid low-cost target if you’re looking for some power.

This probably should be listed among the MLB injuries, but closers have their own special place in the fantasy baseball universe so they get their own section. Turns out Barlow was not able to pitch Wednesday due to a blister (or the start of one apparently) and is going to need a couple of days off to heal. The Rangers turned to Matt Bush, who promptly blew the save, so keep an eye on how Texas rolls things out in the late innings. They’re calling Barlow day-to-day for now, but we’ll hopefully receive additional details later in the day.

Is David Bednar the Official Closer for the Pittsburgh Pirates?

We were told at the start of the MLB season that the Pirates were going to employ a closer-by-committee situation to start the season, but here we are in mid-to-late May and all signs point towards Bednar being the team’s top choice for the ninth inning. After another fantastic two-inning appearance on Wednesday, Bednar earned his eighth save of the season and he’s now picked up a save in four-straight appearances and sixth in his last seven. Meanwhile, Chris Stratton hasn’t earned a save since April 22, leaving many of us to believe what we all pretty much knew back in March. Bednar is the better, more reliable reliever and with Pittsburgh unlikely to win too many games this season, they’re not going to take any chances with a ninth-inning platoon. If you’ve been rolling with Bednar so far, keep at it. He may not be a 40-save guy, but he’s going to have some semblance of reliability moving forward.

The fantasy baseball community is going to the me for this pick, but I have to go against their newest darling George Kirby today. It’s not that I don’t love Kirby as a prospect with his 0.90 ERA and 0.80 WHIP over 10 innings. It’s that big league clubs usually make the proper adjustments to young hurlers and, as we saw in his last start against the Mets, he is not invincible. The Red Sox are rolling right now as Trevor Story and J.D. Martinez start to heat up alongside Rafael Devers and Xander Bogaerts. Kirby could have some early trouble and I have a hard time seeing him go past five innings today. That leaves the game in the hands of the Seattle bullpen and its 4.79 ERA over the last two weeks. Meanwhile, Boston sends Rich Hill to the mound against a Mariners team that is sitting on a .205 batting average with a .297 wOBA and 22-percent K-rate against left-handed pitching this season. I’m going to have to back the team that has momentum on its side right now.

The Arizona Diamondbacks have lost six-straight games and seven of their last eight, averaging just over three runs per game in that span. They have an interesting match-up with Marcus Stroman who is making his first start since coming off the COVID-19 IL. It hits everyone differently, but obviously it hit Stroman hard enough that the team still felt he needed additional rest and pushed his start back a couple of days. I can still see him having success, but I also don’t see him going deep into the game. That might help the Arizona bats, except for the fact that Chicago’s bullpen has been lights-out with a 0.47 ERA over the past week (19 innings). On the other side, Zac Gallen has looked extremely sharp with a 1.05 ERA, a 0.67 WHIP and 35 strikeouts over 34.1 innings. I don’t usually like starters facing the same team in back-to-back starts but the Cubs own a 25.6-percent strikeout rate with just a .303 wOBA against righties this season. I’m not 100-percent sure who is going to win, but I do believe the score stays down in this one.