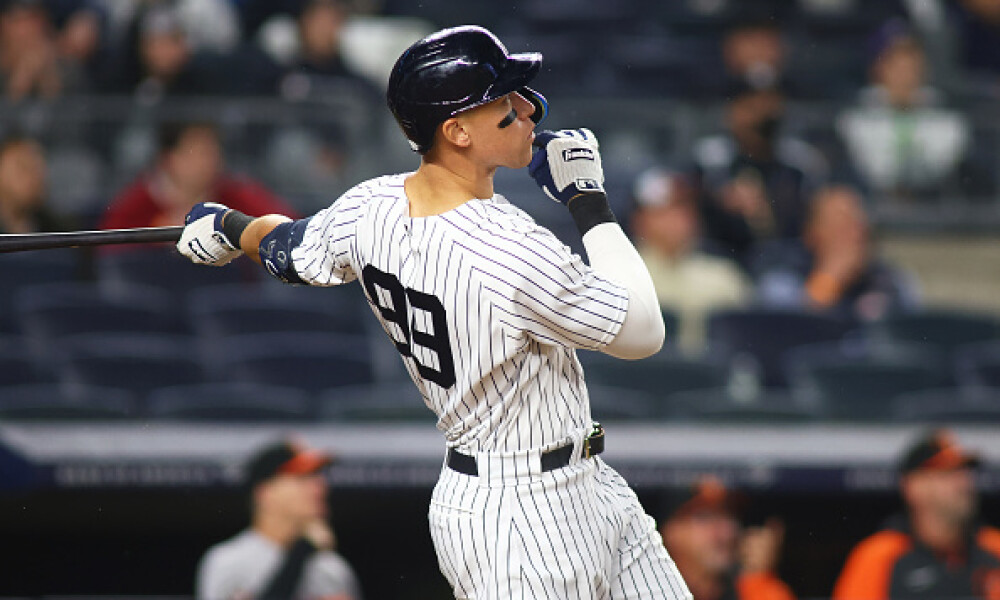 Fantasy baseball owners were certainly served up a full meal on Monday as we enjoyed a full 18-game slate that featured three double-headers. The starting pitching continues to lead the way as we see a number of hurlers creep up the latest fantasy baseball player rankings, but the hitting is starting to take center stage as the MLB schedule heads into the warmer months. Start taking notes right now as you prepare for more fantasy baseball waiver wire work because the fantasy baseball injury report continues to pile up names. We won’t waste any time with pleasantries today and take you right into the action.

Ronald Acuña Jr. Returns to Lineup and Steals Another Base

Fantasy owners knew it was going to be a rocky return for Acuna, following his recovery from a torn ACL. We were told he would miss at least the first two weeks of the season and upon his return, would remain the Braves DH for close to a month. But throughout this, if you weren’t planning on a setback or two, you were setting yourself up for disappointment and this recent five-game absence due to a sore groin, probably had your blood pressure on the rise. Nothing like another stolen base to keep you happy, right? Acuna went 1-for-3 with two walks, a run scored and a stolen base Tuesday; his sixth stolen base of the year. Obviously, you want him back at full health and you want him playing every day, but you have to be happy with some of this early production. He’s already slashing .286/.412/.476 through 11 games and the six steals has his tied for 10th overall in the league. The Braves will keep monitoring his playing time and health closely and as they do, you should enjoy what you’re getting. It’s a long season and if he’s this productive now, just imagine what his second half is going to look like.

Aaron Judge Continues to Mash for the New York Yankees

How long are we going to be able to use this headline? As a Yankees fan, I’m worried it doesn’t go past this season, but it’s also very difficult to imagine the Yankees not paying the slugger to stay in the Bronx. Judge turned down a massive $240M offer from the Yankees in the offseason and said he wanted to test the free agent market. Many scoffed as injuries limited him to just two full seasons in a six-year span, but the outfielder bet on himself and now we know why. His two home runs during yesterday’s game against the Orioles gave him eight for just the month of May and he is now batting .315 on the year with 14 home runs, 30 RBI, 30 runs scored and two stolen bases. The Yankees are going to have to open their wallets even wider if they want to keep this guy in pinstripes.

Christian Walker Powers Up with Home Runs in Three-Straight Games

While the .219 batting average and .310 OBP leave little to be desired, Walker is, at least, contributing in the counting stat categories with a recent offensive explosion. The 31-year-old first baseman has now hit safely in four-straight games with home runs in each of his last three. It looks like the slow start to the season is behind him as he is now hitting .321 for the month of May and the five home runs and 11 RBI he’s chipped in this month already, pushes his totals to nine and 18 on the season. Keep him active in all formats and ride this wave until it breaks.

Well, it’s certainly worth a look, isn’t it? Berrios has had tremendous struggles since making his Blue Jays debut this season but yesterday’s seven scoreless innings against the Mariners is delivering a modicum of hope. He only struck out four, but he scattered six hits and walked two while keeping the Mariners lineup at bay for most of the night. We won’t get ahead of ourselves here, but this effort did drop his ERA to 4.83 on the season and his next start comes on the road. Of course, it comes in St. Louis against a Cardinals team that has a .359 wOBA over the past week. Baby steps. That’s all we’re looking for here.

When Perez left the first game of Wednesday’s doubleheader, fantasy owners knew they were in trouble. Well, not the ones who also roster MJ Melendez. X-rays are actually still pending, but the team immediately put the catcher on the injured list, anticipating at least a 10-day absence. If it turns out to be longer, we’ll let you know here. In the meantime, Melendez figures to see the bulk of the work behind the plate for the Royals and he should be considered in all formats. He’ll have his growing pains, as any young backstop does, but with hits in each game of the doubleheader, one of which being a home run, optimism is recommended.

With teammate Starling Marte already on the Bereavement List, Mets fans held their breath when Brandon Nimmo left the second game of Tuesday’s doubleheader after getting hit by his own foul ball. He never came out for the following inning. X-rays turned up negative and the injury is now being called a bruised right quad. The team has downplayed the injury and according to Mike Puma of the New York Post, Nimmo hopes to be back in the lineup on Wednesday. If not, look for Travis Jankowski to take over in center.

When Adames wasn’t immediately placed on the 10 or 15-day IL following his awkward slide into home and subsequent ankle sprain, we were encouraged that it was just a day-to-day thing and he would return shortly. That was two days ago. Now we are hearing from Brewers GM David Stearns that an IL stint is “certainly still on the table.” If you have daily roster moves, keep Adames on the bench until further notice. Monitor the MLB lineups today and see what they say. If he does land on the IL, it will hopefully be just a 10-day stint and they’ll back-date it to the 16th of May.

UPDATE: The Brewers have officially placed Adames on the 10-day IL this morning, retroactive to May 16. Expect Luis Urías to handle the bulk of the work at shortstop with a platoon of Jace Peterson and Mike Brousseau handling the work at third base. The Brewers also called up Keston Hiura who is expected to see some time at first base as well.

It’s probably not worth overreacting to the move, but Staumont tossed a perfect ninth inning for his third save of the season one day after Barlow served up a late home run and was saddled with a loss. Barlow had earned a save in three of his previous four appearances, but with Staumont available, the Royals weren’t going to take any chances. Staumont now has a win and a save in his last two appearances and should be considered a closer-in-waiting here. Check out the Fantasy Baseball Closer Grid for full details on every team’s bullpen situation.

With the A’s leading the Twins Tuesday, it was Jimenez who was summoned to slam the door shut with two on and one out in the bottom of the eighth inning. However, instead o sending Lou Trivino out to close out the ninth, manager Mark Kotsay let Jimenez finish the game and pick up his seventh save of the season. In 15 appearances, Jimenez has a 0.59 ERA with a 0.98 WHIP and 16 strikeouts over 15.1 innings. While I wouldn’t go dropping Trivino just yet, it would appear that his job as the A’s closer is near the end.

Nothing like starting your day off with a dazzling pitchers’ duel, right? The Braves have Max Fried taking the hill against a Milwaukee lineup that will be without Andrew McCutchen (COVID-19 IL) and likely shortstop Willy Adames as well. The Brew Crew has averaged fewer than three runs per game over their last five and they have just a .297 wOBA against lefties this season. On the other side, Corbin Burnes takes the mound for the Brewers with his 1.77 ERA. The team may not score for him, but he’s also not giving up a bunch of runs either. I don’t want bullpens to screw up my bet for me today, so let’s just stick with the first five innings, especially since we’re getting plus-odds.

The Twins and A’s have split the first two games of the series and the rubber match comes down to Sonny Gray versus Daulton Jefferies. While Gray has been building up his arm strength over his first few appearances, it looks like he is starting to round out his form and is ready to be “unleashed,” so to speak. He’s got 15 strikeouts over his last 8.1 innings, including seven in four innings against the A’s just two starts ag. Meanwhile, Jefferies continues to rack up losses (six in a row right now) and his 4.84 ERA does not bode well for future success. The A’s tagged him for four runs over five innings the last time they met and I don’t see things changing much for him. There’s a little juice on this from our friends at BetMGM and Caesars, so you may want to take this to the DK Sportsbook for the better odds.

It’s the return of Blake Snell to the San Diego Padres rotation and, unfortunately for him, he’s coming in against a Phillies lineup that has averaged just over six runs per game over their last six and has a .338 (third-best) wOBA against southpaws this season. On top of that, they’re throwing Zack Wheeler at the Padres and while he had a small hiccup against the Dodgers his last time out, he had thrown 13.2 scoreless frames in the two starts prior. San Diego edged out the Phillies last night thanks to Mike Clevinger. I don’t think they get the same help from Snell.