Fantasy Baseball May 16 Round Up: MacKenzie Gore Bumped to Bullpen While Hunter Greene No-Hits Pirates and Loses 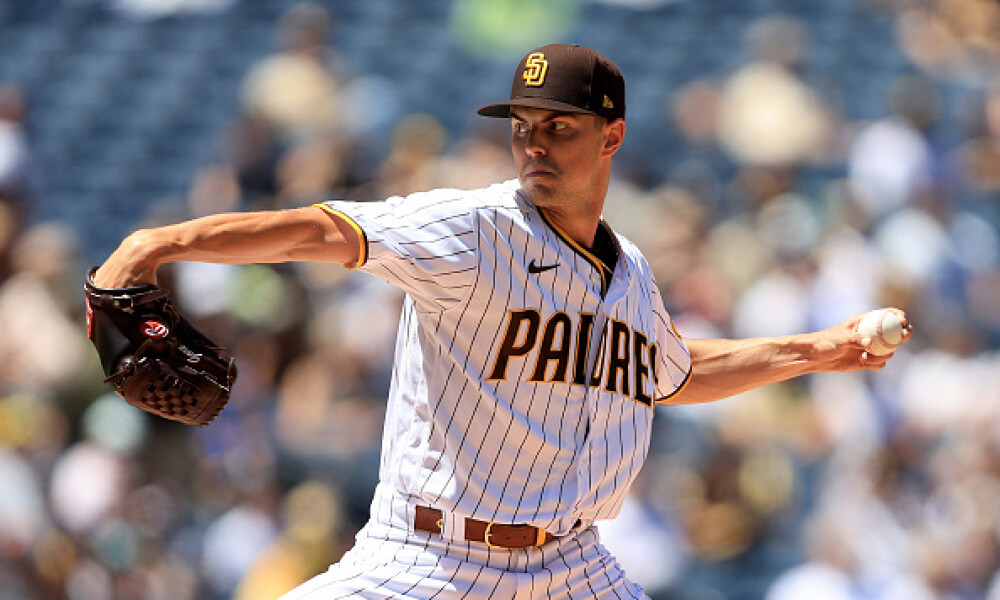 The grind of a fantasy baseball season is relentless. One fantasy baseball scoring period comes to a close, you assess the MLB injuries and their effect on your team, set up your fantasy baseball waiver wire claims, hope for the best and set your lineup for another week. Rinse and repeat. Sometimes you barely have an opportunity to catch your breath. Welp! Suck it up, because that’s exactly what you signed up for – a 26-week marathon where all you do is sleep, eat and talk baseball.

Make a few fantasy baseball trade offers, study which MLB rookies are set to be called up next and prepare for battle each week. We’ll help you along the way, but just remember that we’re all putting in the work here. You’re staying on top of the latest fantasy baseball news just as intently as we are and if you’re not, you’re doing it wrong. Monday’s MLB schedule gets a late start so we’ve got some time to dig. Here’s where we’re starting.

We got great news regarding Padres manager Bob Melvin’s prostate surgery – successful procedure with no cancer found, so from a human standpoint, we can say all is right with the Padres. From a fantasy baseball standpoint, we have to turn to interim manager Ryan Christiansen who told sideline reporter Annie Heilbrun that the team would be moving back to a five-man rotation with the return of Blake Snell. The rotation for the upcoming series against the Phillies will be Mike Clevinger, Snell and then Yu Darvish with both Gore and Martinez working out of the bullpen. Obviously Joe Musgrove and Sean Manaea won’t be going anywhere and the team is hoping to get everyone back on normal rest and back into their routine. Martinez can go back into the player pool, but personally, I would hold Gore for another week if you have the bench space to spare. We haven’t seen Snell outside of this rehab starts, so just to be safe, if you can hold Gore, then do it. If Snell comes away from his start this week with no issues, you know it’s safe to let Gore go too. Better safe than sorry when dealing with an arm of this caliber.

In one of the craziest things we’ve seen this season, the Reds become only the ninth team in MLB history to no-hit the opposition and still lose the game. Rookie Hunter Greene carried a no-hitter into the eighth inning but was lifted after 118 pitches and back-to-back walks. He took the loss when reliever Art Warren allowed one of the inherited runners to score on a fielder’s choice, so while Green took the loss and the earned run, there was no RBI recorded or hit recorded against the Reds in this 1-0 defeat. Big fan of Greene and I love the bounce-back, but the free passes (five in this outing) are too much and this was, after all, the Pirates. Tough loss to take, but this also sums up the Reds 2022 season with one broad stroke.

I sincerely hope you don’t need me to tell you that outings like this happen to everyone and there is no need to panic. If you read this column routinely, then you shouldn’t need my reassurance, but just in case you’re new to the fantasy baseball game, you have it here. Every starter gets tagged like this at some point. It just tends to hurt more in fantasy because, in reality, he’ll just be lights-out his next time out and you enjoy the rebound. In fantasy it’s a little rougher because eight earned runs over 3.2 innings takes a little while to fix with regard to your ERA and WHIP. Rodon himself will likely correct it for you over his next two starts, but the sting is going to last a little bit, especially if some of your other starters gets roughed up. The trick is to understand that this happens to everyone and the law of averages is on your side. Breathe deep. It’s okay. It sucks, but it will be ok and so will Rodon.

After a late-April bludgeoning at the hands of the Guardians, Montas bounced back with seven scoreless innings against the Rays. Then he got tagged by the Tigers for another four earned over 6.1 innings and panic began to set in for some. Similar to what we said about Rodon, all pitchers go through spells like this and it’s up to you to endure. The difference here between Rodon and Montas, though, is that Rodon can go through the season with a clear mind. He may have a big contract to live up to, but the Giants aren’t going to pull the plug on him. With Montas, it’s a little different because of the MLB trade rumors lingering over his head. I’m not saying the blow-ups are going to come at a faster rate, but the mounting pressure definitely adds another element. With the uncertainty of where is future is headed, I might be inclined to deal him after a big start like this rather than hold to see where he lands. Sell high, right? That’s what we do.

If you’re looking for a somewhat early MLB Rookie of the Year bet, then Rodriguez at +450 on BetMGM is where you want to go right now. He went 4-for-4 with a home run, two RBI and a walk on Sunday against the Mets and now has 18 hits over 14 games here in the month of May. He’s pulled the slash line up to .264/.328/.368 and while he’s been caught stealing twice in three attempts this month, he’s still sitting on 11 stolen bases for the year. If the power is catching up to the speed, there’s no way Jeremy Peña is going to stay the favorite for this award.

For a long while it was just Rafael Devers and Xander Bogaerts hitting in Boston, but after another solid weekend, Martinez has jumped back into the mix as he extended his hitting streak to 16 games with a first-inning single off lefty Martín Pérez on Sunday. He’s got three multi-hit performances over his last four games and he is now batting .364 (24-for-66) with seven doubles, three home runs and 10 RBI during this streak. It was just a matter of time before Martinez started to power up, so enjoy the production you’re getting out of the middle of the Boston order.

Big hit for both the Mets and fantasy baseball owners as Megill’s test results left him with a diagnosis of right biceps tendinitis which will force them to shut him down from throwing for at least a few days and then they will re-evaluate. Unfortunately, that leaves him without any kind of a set return timetable so you’re going to have to muscle through without him. Trevor Williams should slot into his rotation spot, but I wouldn’t be using him unless the match-up is super-favorable.

It looks like Adames may be out for a couple of games early in the week as he recovers from an ankle injury that forced him from the field on Sunday. X-rays came back negative so there is no structural damage. Phew! However, it has been diagnosed as a sprain, so you can probably expect him to miss some of this week’s first series against the Marlins. If he misses the full series, then the off-day Thursday should help and get him ready to return home for what could be an explosive series (from the Brewers’ standpoint) against the Nationals.

We saw a fierce collision between Mateo and Tigers first baseman Spencer Torkelson on Sunday that forced Mateo out fo the game with shoulder and chest issues. X-rays came back negative, but it sounds like the Orioles shortstop is pretty bruised up and should be expected to miss a day or two as a result. He is being listed as day-to-day, so hopefully he will avoid a stint on the injured list, but keep a watchful eye to be sure. Chris Owings should see a few extra at-bats while he’s out.

Tough blow for Meadows and the Tigers as they are also outfielder losing Victor Reyes (quad) to the injured list as well. Meadows has been dealing with an inner-ear infection which has led to dizziness, light-headedness and nausea over the past several days. If you’ve never experienced vertigo, then you have no idea how debilitating this can be to someone. He is eligible to return on May 26, but we’re going to have to monitor how he is handling things. A round of antibiotics are certainly in his future, but the inner-ear can be tricky. Derek Hill and Harold Castro should see the uptick in playing time this week. Still too early for Riley Greene (foot), but keep him on your radar for a mid-June return.

We bounced back last week on Thursday, but took a late hit on Friday to dip underneath the .500 mark for the day once again. We’re still way ahead for the season, so that’s not a concern and we’ll stay focused this week in building that bankroll back up. We’ve got some very interesting series coming up this week, so we should be able to find some really nice bets to push us more into the black.

The Angels are in a nice groove right now, going 9-3 and averaging five runs per game over their last 12 games. Noah Syndergaard has looked solid this season, posting a 2.45 ERA with a 1.06 WHIP and the last time he faced these Texas Rangers, it was in Arlington and he limited them to just two runs over six innings for the win. The Rangers are coming in having list two of their last three and Jon Gray takes the mound after leaving his last start early with a knee issue. He said he “felt something” and will now wear a brace for this outing. I’m ready to invest in the Halos tonight and the juice say’s I’m on the right track.

While the Houston Astros have won 11 in a row, they find themselves as underdogs to the Boston Red Sox who took two of three from Texas and have been enjoying this 16-game hit streak for J.D> Martinez. The Boston bats have woken up and they’ll take on Jake Odorizzi to start. They’ll throw Garrett Whitlock at the Astros and while he’s been a bit of a revelation now that he’s in the rotation, there’s just something fishy about this line. We’re not going to play around with the Red Sox as a favorite on the money line, but we will invest in the bats in this game and look at the over for total runs.

The Diamondbacks have dropped three of their last four games while averaging fewer than three runs per game. Now they face Tony Gonsolin who has looked sharp in his last four outings – four walks in his last one notwithstanding. Arizona has seen him before and plated three runs over four innings, but we’re looking more at how the Dodgers match up against Madison Bumgarner and, more importantly, the Arizona bullpen. Dodgers are 10-2 at home this season, MadBum should regress a little from his last start and the Arizona bullpen is already overworked and sporting a 4.87 ERA on the year with an even more disturbing 5.75 ERA over the past week. There’s no value on the Dodgers money line, but we’re willing to take a chance on the run line today.