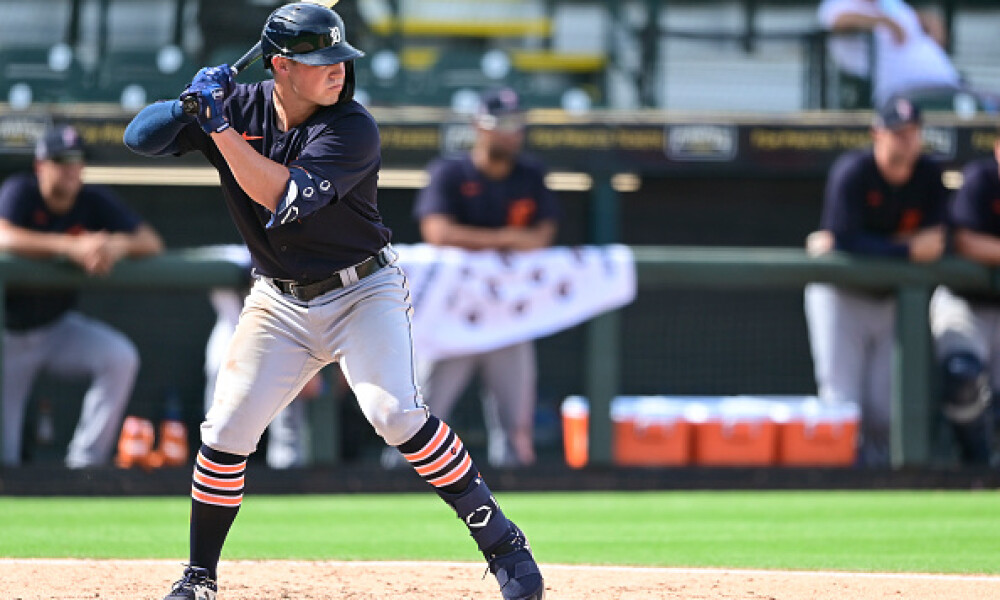 Are you ready to win some 2022 fantasy baseball championships? I know I am.

This past weekend saw a lot of roster movement from MLB teams as they continue to pare down their rosters for Opening Day. We won’t be listing all of the movement here, but coming out later today, we’ll provide you with a full list of both MLB lineups and MLB starting rotations. We are also working on a last-minute piece that will help you with fantasy baseball multi-position eligibility. If you, like so many others, have your fantasy baseball draft between now and the start of the season, we’ve got you smothered and covered here.

When Tigers manager A.J. Hinch appeared on the Fantasy Alarm Show on SiriusXM Fantasy Sports Radio last week, it almost sounded like it was a done deal, but apparently, “they still have things to do to make this team,” said the manager. General Manager Al Avila said he wasn’t going to play around with service time issues and both players are hitting well this spring. Torkelson is slashing .278/.381/.444 with three doubles through 18 spring at-bats while Greene is slashing .333/.471/.833 with one home run and four RBI over just 15 plate appearances. Hinch even cited Greene’s strong instincts as an outfielder while lauding Torkelson’s work at first base. Maybe the manager tis using this as a motivational tool to keep the rookies hungry this spring, but from a fantasy standpoint, both are definitely worth drafting. Even if they don’t open the season in the majors (a big if, at that), they’ll be up soon enough and producing.

As if Ohtani’s fantasy value couldn’t get better, right? As a hitter, he’s a fantastic option who posses both power and speed and while the batting average lags at times, his on-base work is stellar. Now you’re going to give him more at-bats and have him protected in the lineup by Mike Trout? Yes, please. Sign me up. If you play in a league with daily roster moves and you can use Ohtani as both a hitter and a pitcher, he warrants consideration for the No.1 spot overall. If it’s a head-to-head points league, even more so. Check your scoring and check the ways you are allowed to deploy him, as that could make all the difference in your draft strategy.

Houston Astros to Keep Cristian Javier in the Bullpen for Now

Well, this is mildly disappointing and hurts the overall fantasy value of Javier who will open the season as a long-relief swingman for the Astros. Until Lance McCullers Jr. (forearm) is ready to come back, it appears as if Jake Odorizzi will hold down the fifth-starter’s job. Javier is just 25-years-old so he still has time to develop into a solid starter. He’s got low-to-mid 90s heat and solid command of his secondary offerings, but still issues too many walks and gets caught by the long ball a little too often. It’s only his third season in the majors, so give him some time, but for drafting purposes right now, you can/should look elsewhere. Keep tabs on him for waivers though.

While Didi Gregorius maintains the lead for the Phillies shortstop position, Stott’s hot spring could land him a bench role to start the season with a potential move into the starting lineup. Gregorius has had his ups and downs and veteran Jean Segura hasn’t always been a bastion of health, so if Stott were to stay up with the big club, he could be worth a depth add late in your drafts. He’s slashing .417/.588/667 with one homer over six spring games thus far and showed last year that he can blend both power and speed into his game. This might be a deep cut for many of you, but don’t sleep on the name.

He’s 36-years old and isn’t really a threat to motor around the bases like a typical leadoff guy, but Donaldson has 30-homer power and a .367 career on-base percentage. The veteran can work the count and force a starter to show his hand early and that’s what the Yankees are really looking for. The Yankees aren’t a small-ball team, so mixing Donaldson in at the leadoff spot to force opposing starters to throw more in the early innings can be a good thing. It’s also a very good thing for Donaldson as leadoff hitters see more at-bats per game than anyone else.

Matt Brash Has Inside Track on Seattle Mariners Fifth-Starter Job

If you listened to the interview with Mariners President of Baseball Operations, Jerry Dipoto, then you would know exactly who Matt Brash is. When discussing the rotation and the prospects who could make a splash, Dipoto mentioned Brash as a guy to keep an eye on. After the interview, he privately texted Jim Bowden to again say, “Brash – look out, stuff is nasty.” That’s been in my head ever since and after watching the 23-year-old righty throw three hitless innings with six strikeouts on Sunday, I’ve bumped him up on my boards a little bit. If he can land the fifth-starter’s job in Seattle, they’re going to have some serious strikeout firepower for fantasy owners with the way he and Logan Gilbert are throwing.

Did you all miss the news that the Marlins sent Bryan De La Cruz down to the minors over the weekend? While that doesn’t mean Sanchez is a lock for the job, the Marlins don’t really have too many other options? Roman Quinn? Kid’s got speed, but lacks plate discipline. Jon Berti? He’s a classic fourth outfielder who has great speed, but doesn’t hit with much consistency. Delino DeShields? OK, stop laughing. With Avisaíl García in right, Jorge Soler in left and Garrett Cooper at DH, Sanchez looks like he could be the guy you want right now.

This is, of course, coming from Braves manager Brian Snitker. Ynoa should actually have the fourth spot locked up while Wright competes with Tucker Davidson, Kyle Muller and Spencer Strider. After what we saw from Ynoa before he got hurt last year, he’s definitely a starter to grab late in your drafts for depth. Wright still has some command issues which could get exposed against true big-league hitting, but has improved over the past calendar year enough to warrant the deeper look.

Does Cody Bellinger Need to Adjust His Mechanics Again?

Boy, this one’s getting ugly, isn’t it? After another 0-for-4 with four strikeouts on Sunday, Bellinger is now batting just .158 over 19 spring at-bats with 14 strikeouts. Yeah, 14 strikeouts. We had hoped that the tweaks to his mechanics made in the offseason would do the trick, but the results have been absolutely awful. Keep monitoring Bellinger and look for his first breakout game of the spring to see if he can build off it. His current 97.66 ADP is starting to feel less like a bargain and more like a reach right now, so be careful. If he’s sliding in your draft, maybe look for him to be a potential bargain, but until he rights this ship, he’s going to be an albatross around your team’s neck.

After spending the past decade in Los Angeles, Albert Pujols (Joes to his mom) is finally heading back home to St. Louis where it all began for this future Hall of Famer. Pujols signed a one-year, $2.5M deal and will serve as a right-handed bat off the bench while providing a strong veteran presence in the clubhouse. He’s not going to be worth using in fantasy at 42-years-old, but it’s a nice feelgood story as he was the guy who changed the fantasy landscape with how we go after rookies each year.

While reports ay that Castillo hasn’t incurred any setbacks in his recovery from shoulder soreness, he still hasn’t made any appearances in Cactus League play. With the MLB regular season set to open late next week, Castillo won’t have enough time to get ready. He’ll probably need a few more weeks to get everything set for the season, so plan for him to miss at least the first two weeks and by then, we’ll probably have more clarity as to when he will make his 2022 season debut.

Cron (Christopher when he's in trouble) was hit in the head with a pitch during Sunday’s Grapefruit League game and left promptly for an examination which apparently went well. He was officially cleared via MLB concussion protocols, but you should expect the Colorado Rockies brass to keep him out for a few days just to ensure he is ready to go for Opening Day. Monitor the situation, but Cron should be just fine in the end.

White Sox fans’ hearts sank when Vaughn was carted off the field Sunday after making a diving catch in right field, but we should be able to relax as we’ve been told he is only suffering from right hip discomfort at the moment. That’s right – no knee injury as originally feared. However, he will undergo further tests on the hip to ensure there isn’t a deeper issue here. Expect Vaughn to miss a few days while he recovers, but unless there’s something the original x-rays missed, he should be fine for Opening Day.

The deal is considered minor as Alcantara was just designated for assignment by the Chicago Cubs, however, with shortstop Nick Ahmed dealing with a shoulder injury, Alcantara just might have some value. He’s 25-years-old with a slick glove, so if he can improve upon his plate discipline and continue to build up his power, there could be a spot for him in the lineup. He’s not one to draft right now, unless you’re in an NL-only league, but he is certainly someone to put on your watch list.