Fantasy Baseball June 26 Round Up: Cristian Javier And The Astros No-Hit The Yankees 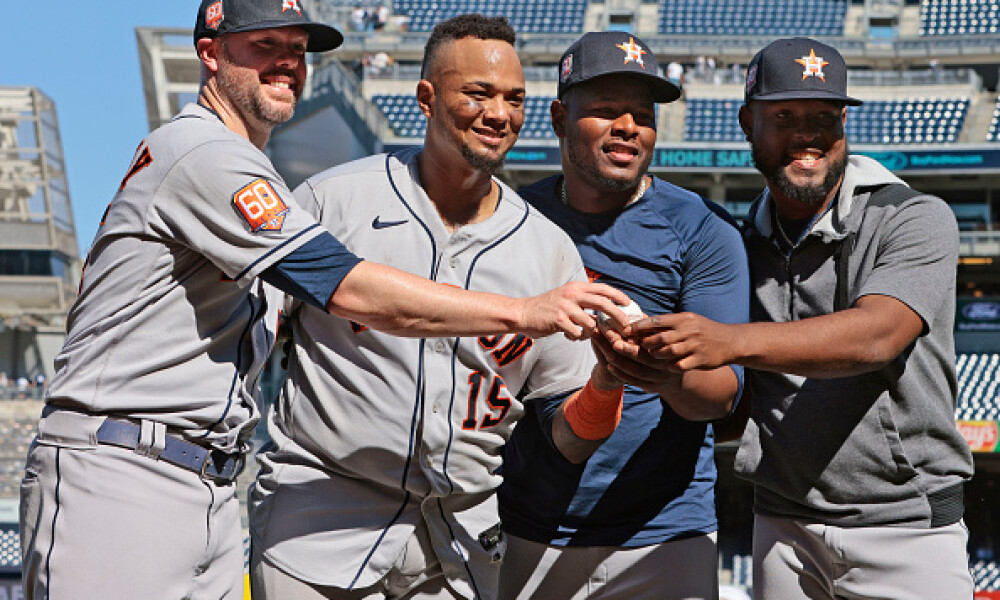 It’s already Sunday and as Week 11 comes to an end we need to first take a look back at the top fantasy baseball news and headlines from Saturday’s Major League Baseball games which included an Astros no-hitter against the mighty Yankees, a playoff atmosphere in Atlanta, a mammoth blast by Shohei Ohtani, and an injury to reigning NL MVP, Bryce Harper. Do not forget to check out our updated June Fantasy Baseball Rankings and MLB Starting Lineups before setting your fantasy baseball lineups. We also have the MLB Injury Report and Fantasy Baseball Waiver Wire, so let’s look back at the top performances and key injuries from Saturday and a quick look ahead at today’s MLB baseball action.

Mighty Yankees Get No-Hit In The Bronx

Cristian Javier struck out a career-high 13 batters and combined with Hector Noris and Ryan Pressly to no-hit the team with the best record in baseball, the Yankees on their home turf. Javier’s 13 strikeouts were the most by an Astros starter since Gerrit Cole struck out 14 batters in 2019.

This is the 14th Astros no-hitter and first since Justin Verlander did it in 2019. It is also the first time the Yankees have been no-hit since the Astros did it back in 2003 when six pitchers combined for the feat at Yankee Stadium.

Max Fried Throws His Name Into The Cy Young Race

It seemed like the playoffs last night in Atlanta as the Braves and Dodgers battled it out in the summer heat. They have already played in the last two National League Championship Series and last night Max Fried showed why he is considered by many to be one of the best left-handed pitchers in the game. The Braves starter added to his Cy Young resume by only allowing six hits to the powerful Dodgers offense while striking out nine batters in the Braves 5-3 win. Fried now carries a 2.77 ERA/1.05 WHIP with 92 strikeouts in 94.1 innings on the season.

Mark Appel, the first overall pick of the 2013 MLB Draft, is no longer part of a trivia question. He held the distinction of being one of only three first-overall picks in the MLB Draft to never play a game in the majors. Brian Taylor (1991, Yankees) and Steven Chilcott (1966, Mets) are the only others to never making the big leagues.

After leaving baseball in 2017, Appel made a return last year and after another bumpy season they made him a full-time reliever in 2022 and he has finally made a mark. He was 5-0 with a 1.61 ERA in 19 appearances in Triple-A and finally received the long-awaited call to The Show.

Shohei Ohtani hit the hardest home run in his career and the hardest hit blast of any Angel since Statcast began tracking in 2015 last night. The shot took off from his bat at 118 mph and traveled a projected 462 feet. It’s been a slow start at the plate this year by Ohtani standards, but he is hitting .333 with four home runs, two doubles and a triple over the last 12 games.

Luis Castillo On The Move?

Peter Gammons, of the Athletic, noted that the Yankees brass has been discussing bringing Reds veteran right-handed starter, Luis Castillo, to the Bronx. Castillo is signed through 2023 so this will have to be a strong offer by the Yankees to get the Reds to the pull the trigger on a deal. One name mentioned as a possible trade piece is Yankees prospect Will Warren, a quickly developing right-handed pitcher at Double-A.

Bryce Harper, the reigning NL MVP having another huge year, was nailed in the thumb from a Blake Snell fastball and reports are now hat he suffered a fracture. There is no timetable yet for his return, but he was having another big season batting .318 with 15 home runs, 48 RBI, and a .984 OPS. He will be placed o the 10-Day IL today.

Aroldis Chapman of the Yankees pitched a scoreless inning on Friday in his Minor League rehab assignment with Double-A Somerset. He allowed one hit and struck out one on eight pitches (five strikes) in the appearance. He is scheduled for one more appearance today with Somerset and if all goes well he should be activated back to the Yankees roster.

It wasn’t a surprising move, but the Mariners officially placed Ty France on the 10-Day IL yesterday with a left elbow strain. The injury occurred when France collided with the A’s Sheldon Neuse at first base on Thursday. There is no timetable set for his return, but France was having a breakout season slashing .316/.390/.476 with 10 home runs and 45 RBI.

Over the last 14 days the Giants are striking out at a clip of 25.4% which is 27th-worst in the league against right-handed pitching. Tyler Mahle is a strikeout pitcher and is much better on the road with a 3.78 ERA (compared to 5.13 at home) and a WHIP of 1.02. Today he is in a pitcher’s park and has hit the over on this six-strikeout prop in three of his last four games which also includes one push. Over his last five starts Mahle has a 10.7 K/9 rate with a FIP of 2.77 and 2.14 ERA/1.04 WHIP. Take the over here on Mahle’s strikeout prop

This sure is not a low strikeout prop but I have faith in McClanahan’s arm and the matchup today. McClanahan is averaging 12.06 K/9 on the season with a 33% strikeout rate over his last five starts. Over that same span he is carrying a 3.16 FIP with a 1.42 ERA and 0.82 WHIP with a seven-strikeout game as his lowest mark. The Pirates are ranked 27th in all of baseball with a 25% strikeout rate against left-handed pitching.