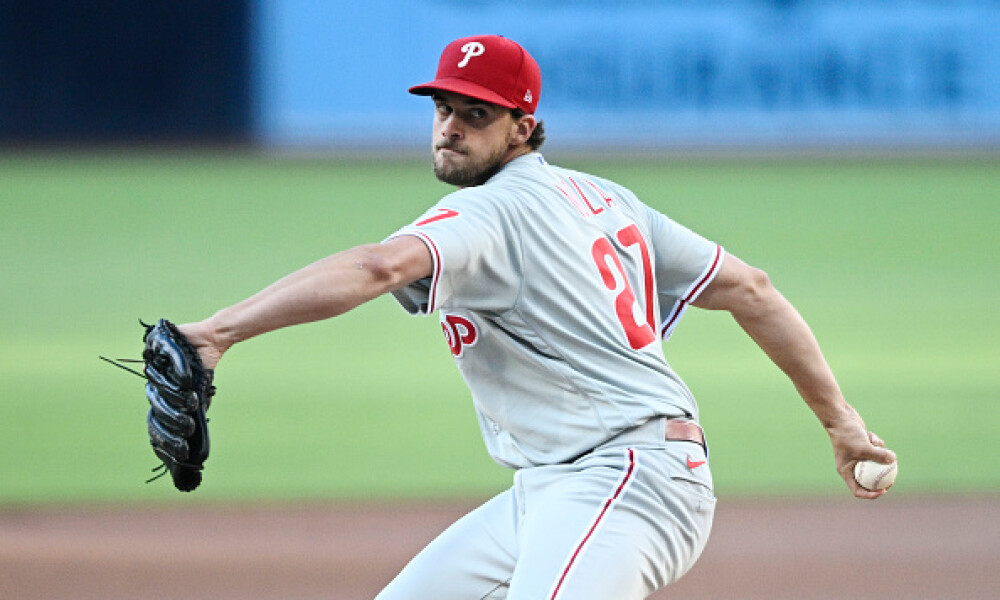 Happy Saturday! As we near the end of Week 11 let’s first take a quick look back at the top fantasy baseball news and headlines from Friday’'s MLB games which included some stellar pitching performances from Aaron Nola, Graham Ashcraft, Germán Márquez and Kyle Hendricks to name a few. There were also 22 home runs hit on Friday with an unlikely name in Edward Olivares homering twice for the Royals in his return from the injured list. Don't forget to check out our updated June fantasy baseball player rankings before setting your lineups. Plus, use the latest MLB Injury Report and the fantasy baseball waiver wire top targets to help win your leagues. Before we start another weekend let’s take a look at some of the top performances and key injuries from Friday night's MLB action. Plus, we'll look ahead to tonight’s slate of games if you're looking to play MLB DFS lineups. Be sure to keep an eye on the MLB lineups and the MLB weather report as well.

Aaron Nola Is the Fantasy Baseball Ace We Hoped For

It had been a really up and down first few months of the season for Nola who had an ERA nearing 4.00 over his first 11 starts but after Friday's performance, we finally see him looking like the pitcher that was taken in the first four-to-five rounds of fantasy baseball drafts this season. Over his last four starts, Nola has a 0.90 ERA while striking out 30 over 30 innings. Nola has pitched at least seven innings in each of those four starts while tossing two eight-inning shutouts. Friday's 10 strikeout performance was his second double-digit strikeout effort of the season.

Graham Ashcraft A Name To Notice

The Reds rookie right-hander put together one of his best starts of the season on Friday as he tossed eight innings of two-run baseball while striking out a career-best eight as he faced a tough Giants lineup. On the season his ERA now drops to 3.27 with a WHIP of 1.09. Ashcraft does not have a great strikeout rate at the major league level so far, posting just a lowly 5.88 K/9 but during his minor league career he was much closer to a strikeout per innings pitcher and he throws 100 MPH so the gas to put guys away is certainly there. I think it's also worth noting that his underlying numbers are pretty solid as his 3.27 ERA is matched by a 3.45 xERA and a 3.52 xFIP. As the rookie continues to settle in we should see that strikeout percentage increase a bit and as long as he continues to have a strong ground-ball rate (57.5%) then he should limit the damage done.

Mike Trout launched his 22nd home run of the season on Friday which was his sixth home run over his last nine games. Heading into the season it felt like a crime to see Trout's ADP teeter between the first and second round knowing that he still showed the talent to be the top overall player in fantasy baseball as long as he could stay healthy and to this point, the health has not been a problem and Trout has certainly found himself outperforming his ADP. To go along with his 22 home runs Trout is hitting .289 with an OPS of 1.053. He currently finds himself on pace to hit 50+ home runs this season if he is able to avoid the injured list.

Javier Báez Is Locked In As We End the Month

One of the more popular questions we've gotten in the Fantasy Alarm discord this season is “what is wrong with Javier Báez?” and my answer to that has usually been that the man got paid to go play in Detroit which is a losing team and has likely taken the bag and checked out. To be fair, his performance up until these past few weeks was backing up my theory but all of a sudden Baez has gotten HOT. Maybe teams and pitchers thought the same way I did and figured he was an easy out and therefore just trying to overpower him but Baez is now making them pay. His home run on Friday was just his seventh of the season but he has hit four of those seven home runs over the last six games including having now homered in three straight contests. IF Baez is now checking in, there is tremendous power upside here and run production capability as he hits in the middle of the Tigers lineup.

Trevor Rogers has not been the same pitcher this season that he was during his rookie year and this was a matchup that we just attacked in his most recent starts as he faced the Mets in New York and allowed three runs over five innings. Rogers has actually been much worse pitching at home this season, owning an ERA of 8.85 having allowed 20 earned runs over 20.1 innings pitched.

So, this play is an interesting one. Gilbert has only gone over 6.5 strikeouts once in his last six starts. He even just faced the Angels and finished with six strikeouts over six innings. He's pitched to six strikeouts in each of his last two outings. That being said, this matchup is just too good given his talent that I'm willing to give it another go. The Angels have a strikeout rate of 30% against right-handed pitching over the past two weeks and overall on the season they have the highest strikeout rate against right-handed pitching at just north of 26%. Gilbert has a near 25% strikeout rate on the year with a K/9 close to a strikeout per inning. With Gilbert pitching at home today I'm looking for him to get a little bit of a boost against this swing happy Angels lineup.

Lynn takes the mound for his third start of the season today as he runs up against the Baltimore Orioles. In his first two starts, he has looked a little bit shaky to put it lightly, allowing six runs on 14 hits over 9.1 innings. In his most recent start, he faced a tough Blue Jays lineup and finished with five strikeouts over five innings of work. Those who watched that game will actually remember that game will remember Lynn being pretty upset with the home plate umpire as he was getting squeezed on quite a few calls. Of course, that start was nothing compared to what happened later in the series where Doug Eddings had the worst called game behind the plate this season so the entire umpire crew, in general, failed the test. Today's matchup against the O's is an easier challenge for Lynn with Baltimore ranking in the top 5 in strikeout rate against right-handed pitching over the past two weeks.