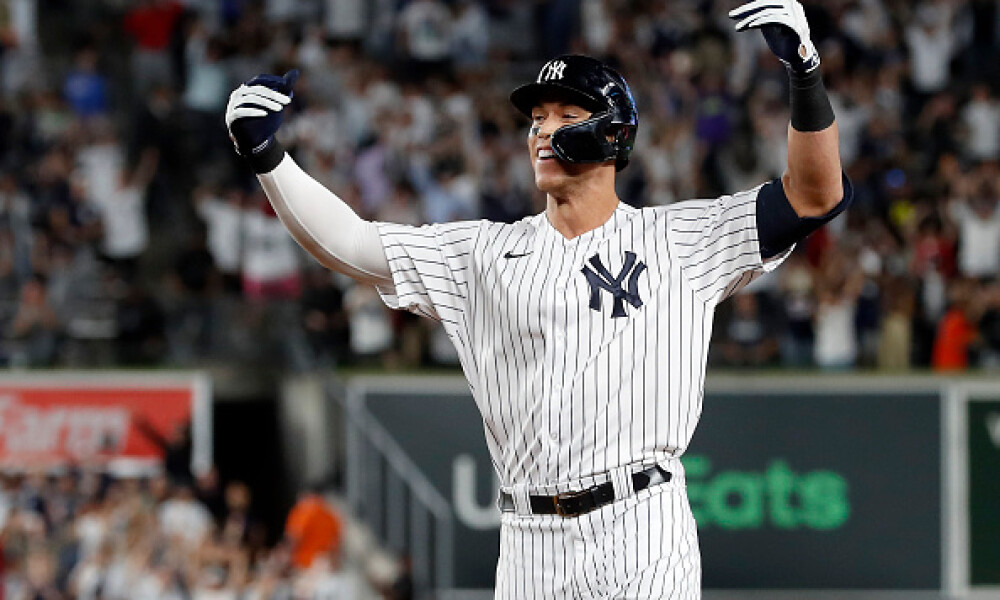 Thursday’s Major League Baseball action was full of all kinds of MLB highlights that kept the fantasy baseball world abuzz as we get ready for another big weekend. The New York Yankees had another walk-off win with Aaron Judge solidying his spot atop fantasy baseball rankings. The Pittsburgh Pirates also had some walf-off magic of their own with fantasy baseball sleepers and MLB top prospects on the roster. Meanwhile, the Los Angeles Dodgers continue to show that they are still the King of the National League and a top MLB DFS stack. On the other hand, San Diego Padres starter Joe Musgrove had a less-than-ideal outing yesterday. At least the Padres got some good news on Manny Machado as he makes his way back from the MLB injury report. We also dive into tonight's MLB daily fantasy lineups to help you win with MLB DFS top picks. Keep an eye on the latest MLB lineups, today's MLB weather report, and the MLB daily projections before setting daily fantasy baseball lineups. Pay attention to the top fantasy baseball waiver wire targets and the latest MLB news as well. Let’s now go back and take a look at yesterday’s action plus a look ahead at tonight’s MLB DFS picks.

A big four-game series between the Yankees and Houston Astros opened with the dramatic last night as the Bronx Bombers walked it off for the ninth time this season. They were down by three runs in the ninth until an Aaron Hicks homer tied the game and an Aaron Judge single won it. The Yankees have now won 15 consecutive games at home and it was their 21st comeback victory of the season. They also boast a major league-best 52-18 record.

Everything was going well for the San Diego Padres' right-hander yesterday until he gave up five runs in the sixth inning to the Philadelphia Phillies. Musgrove ended up with seven hits and six runs allowed with just one strikeout in the outing. It's the first loss of the season for the Padres' starter, who's been one of the best fantasy baseball pitchers of 2022. He's now sporting an 8-1 record, 2.12 ERA, and 0.95 WHIP. Expect a much better performance next time out.

Adley Rutschman Is Here to Stay

It was a rough start after his heralded debut, but Adley Rutschman is showing that he belongs in the major leagues now that things have quieted down. The Baltimore Orioles' rookie catcher hit his second home run of the season and drove in three in last night’s 4-0 win. After hitting just .143 in his first 15 games, MLB Pipeline’s No. 1 prospect has hit a solid .304 (14-for-46) with eight doubles, two home runs, and seven RBI over his last 12 games.

Michael Chavis and Pittsburgh Pirates Walk It Off

The Yankees are not the only “walk-off” team in the majors. The Pirates' Michael Chavis slammed a game-winning hit in the 10th inning to beat the Cubs, 8-7, yesterday. Chavis also hit the game-tying home run in the eighth inning in a game that was marred by a possible Ke’Bryan Hayes injury, who banged up his left shoulder sliding into Wilson Contreras for the winning run.

The Dodgers have been good this season, but the consistency hasn’t always been there. Things may be changing as Los Angeles is coming off a sweep over the Cincinnati Reds where they scored 26 runs and had 42 hits. It was the team's biggest three-game series in over two years in terms of offensive production. The Dodgers also had their first five home run game of the season as Freddie Freeman, Cody Bellinger, Max Muncy, Will Smith, and Trayce Thompson all went yard. This team is locked in for a big summer.

In yesterday’s 3-2 win over Colorado, the Miami Marlins' Jon Berti set a couple of franchise stolen base records. He has now stolen 21 bases without being caught, a record previously held by Emilio Bonifácio set back in 2012. Berti’s 17 steals this month are also the most by any Marlins player in the month of June.

The Rangers sent left-handed bat Willie Calhoun to the Giants in exchange for outfielder Steven Duggar. The move doesn't have a ton of fantasy ramifications, but it's still noteworthy. Duggar, a right-handed hitter, has been on the IL since April 21st with a strained oblique but has been on the Giants roster for the last five seasons. His career slash is .242/.297/.377 with a high 24.9% strikeout rate. Calhoun had requested a trade a month ago after being sent down to Triple-A Round Rock. He had one strong season with the Rangers back in 2019 when he hit 21 home runs in 83 games, yet he has only hit .223 with eight home runs and 40 RBI in 122 games since.

Danny Mendick and Adam Engel were both placed on the White Sox Injury List yesterday. Engel strained his hamstring on Wednesday against the Blue Jays and was placed on the 10-day IL. Mendick’s injury is more severe, as he tore his ACL in his right knee in a collision with Adam Haseley trying to catch a fly ball.

Manny Machado went through a light 40-minute workout before Thursday’s game against the Phillies. Reports are that he could return before the end of the weekend and Padres manager Bob Melvin told reporters that he could even make a pinch-hit appearance in the next few days.

There are a lot of good pitchers today but Aaron Nola has been on a roll and is the top overall arm for MLB DFS lineups. The Phillies' righty now gets to pitch in a pitcher-friendly park (Petco Park) against a depleted San Diego Padres lineup. Nola has two scoreless eight-inning starts over his last three games. He's also gone seven or more innings while not allowing more than six hits or more than two runs in four of his last five starts. Nola is a lock for me today on all sites.

I have been a Jeffrey Springs advocate every start since he broke into the Rays rotation. Today he gets to face a free-swinging Pirates offense at home in pitcher-friendly Tropicana Field. His pitch count isn’t the greatest (85-95 pitches) but is a clear SP2 on DraftKings for me and a value pivot off of Nola on FanDuel.

Merrill Kelly is another value pitcher to target against a bad Detroit Tigers offense. Kelly will get you 100 pitches and seven innings. The Arizona Diamondbacks' starter has a 3.46 ERA and 1.29 WHIP on the season with a 7.89 K/8 rate.

The Los Angeles Dodgers are much more affordable over on FanDuel but in play everywhere as the top overall stack. The team is starting to smash – just look above at what they did to the Reds in their most recent series.

This is a great matchup for the St. Louis Cardinals against Kyle Hendricks and an overworked Cubs bullpen. Hendricks is 2-6 on the season with a 5.43 ERA and has allowed 13 home runs. Left-handed hitters have raked Hendricks this season to the tune of a .413wOBA and 10 of the 13 home runs allowed. Load up on the likes of Tommy Edman, Dylan Carlson and rookie Nolan Gorman plus BVP standouts Harrison Bader (8-for-21), Paul Goldschmidt (13-for-41) and Nolan Arenado (10-for-37 with three bombs).