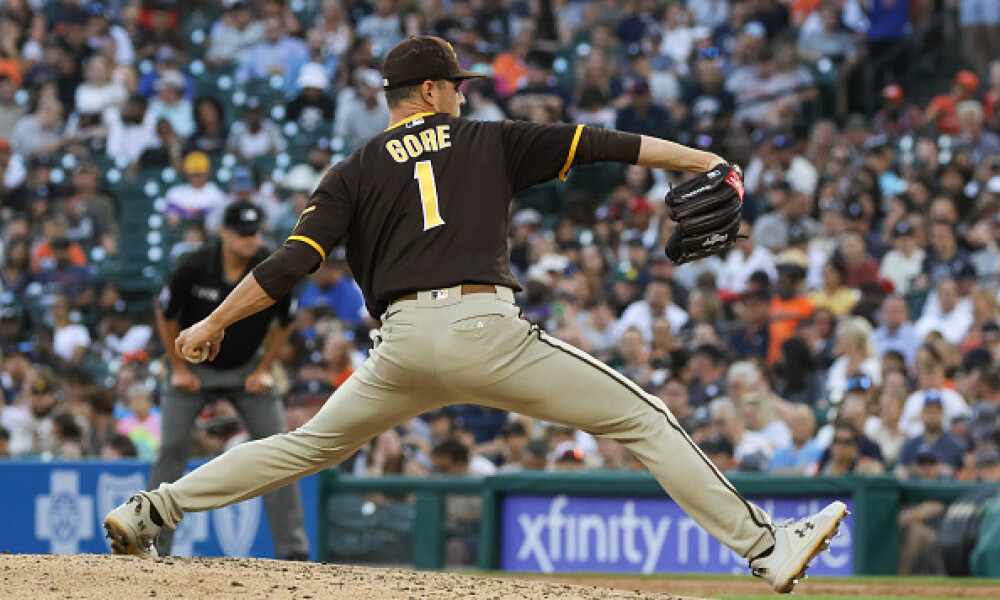 Before we look ahead to Tuesday fantasy baseball lineups, we have to discuss the relevant MLB news and headlines from Monday night’s Major League Baseball action. Of course, there are plenty of fantasy baseball ramifications from last night’s top performances, notable injuries, and everything in between. San Diego Padres pitcher MacKenzie Gore lands on the MLB injury report with elbow soreness and the MLB top prospect will undergo further testing in the coming days to determine if there is any significant damage. Meanwhile, the Seattle Mariners get back in the win column and continue their hot stretch. Elsewhere, Nick Lodolo dominated the Marlins in his best start of the season while fellow southpaw Aaron Ashby bounced back in a big way against the Rockies. Could these two southpaws prove to be some of the better fantasy baseball waiver wire pickups down the stretch? Absolutely! Plus, as the 2022 MLB Trade Deadline looms closer, rumors continue to swirl about Washington’s Juan Soto with numerous teams appearing to be involved. Keep an eye on the latest MLB projections and fantasy baseball rankings to see how your lineups will be affected by any trades. As we close the door on Monday’s baseball action, I’ll give you my top MLB player prop and best bet of the day for Tuesday’s Major League Baseball slate. Before you set any MLB DFS lineups, lock in MLB bets, or prepare for tonight's fantasy baseball action, be sure to check on the latest MLB weather report updates and confirmed MLB lineups. Now let's dive in!

After a pitcher makes a pitch, looks away, and then slyly stretches his arm, it’s never a great sign. Furthermore, Gore's grimaces coming off the mound last night weren’t exactly the most optimistic. Gore had been struggling lately after a hot start and his velo had dipped a bit – even significantly more in yesterday’s appearance. Consider him to be day-to-day for the time being after he left yesterday's game early with an elbow injury. More information should be made available in the coming days for the San Diego Padres' young southpaw. 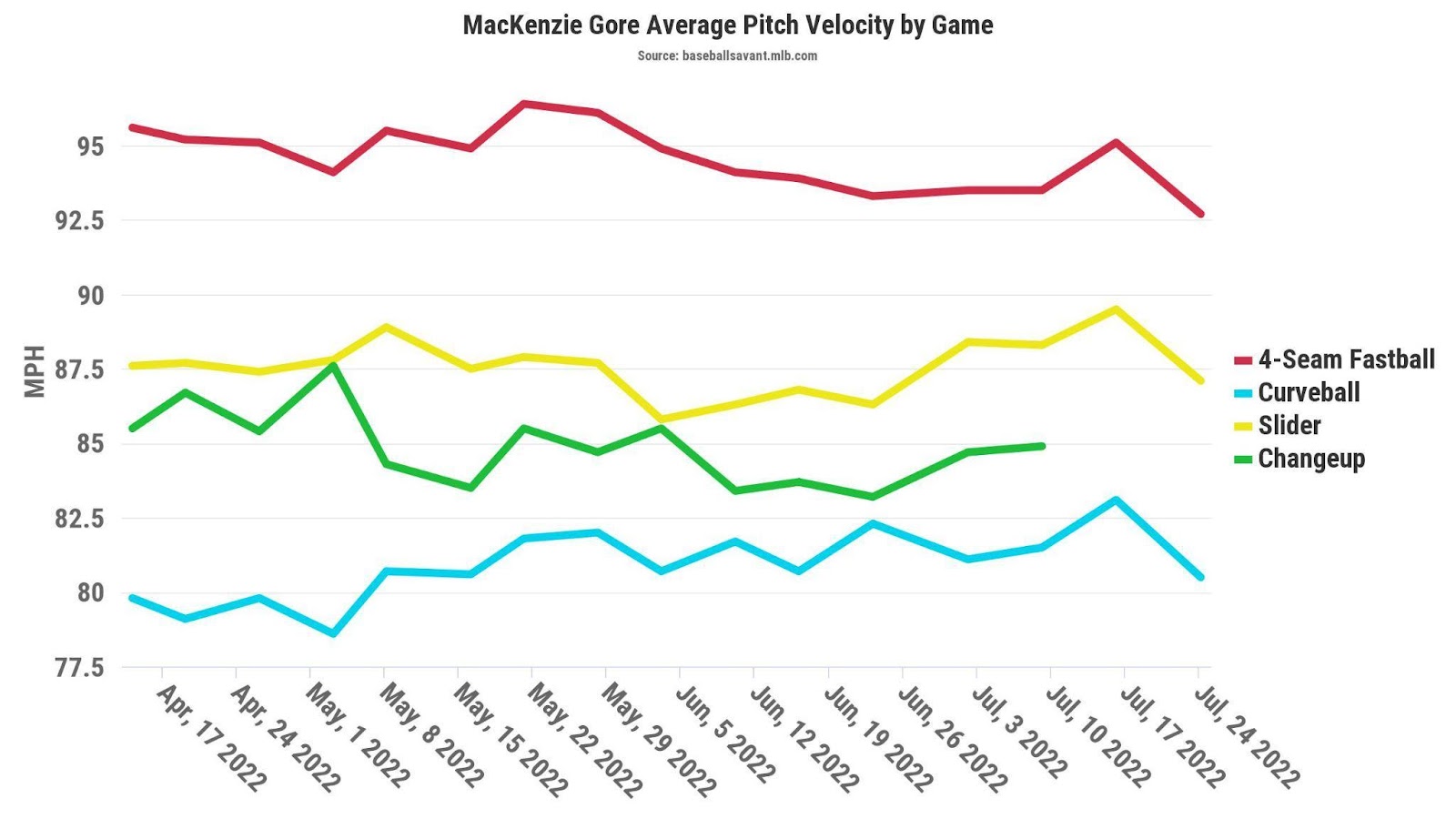 With last night’s win over the Rangers, the Mariners are now 15-4 in the month of July. Chris Flexen posted his fourth quality start in his last five outings, and if he’s available in your fantasy baseball leagues, it may be time to scoop him up. Sure, he’s not a huge boost to your team’s strikeouts, but he hasn’t lost a start since June 13. In seven starts since that loss, Flexen is 5-0 with a 2.79 ERA. Again, strikeouts are nearly nonexistent for him, but he’s stayed out of trouble. Meanwhile, Ty France’s three hits were a big part of last night’s victory and his solo homer capped it off.

The Minnesota Twins will welcome back boom-or-bust slugger Miguel Sanó to the lineup after he missed quite a bit of time with a knee issue. He opened the year ice cold, going 5-for-54 (.093) with 21 strikeouts and just one home run. In seven games during his rehab stint at the Triple-A level, he hit .348 with an .826 slugging percentage – but he had 10 strikeouts in just 23 at-bats. From a fantasy perspective, we know what we are getting with Sano. When he sees the ball well, he can hit for power and rack up home runs in bunches. Even when things are going well, though, he’s still a guy with a perennial 30+ percent strikeout rate. Just to put things into perspective, his 32.3% strikeout rate through 65 plate appearances this season would be the lowest mark of his career by over two percentage points. Additionally, where will Sano play? Will he play regularly for the Twins? I think we have more questions than answers at this point.

Jonathan India now has three home runs in his last four games, and he’s hitting .315 with a 171 wRC+ over his last 60 plate appearances. Last night’s grand slam was the icing on the cake of a dominant win over the Marlins. On the mound, Nick Lodolo carved up Miami, going six strong innings for the first time this season and posting a season-high nine strikeouts. Lodolo now has a 13.08 K/9 on the year and while he’s lasted more than five innings in just two of his seven starts, the strikeouts have been excellent. Plus, he’s only had two or three outings where he’s been really knocked around. Lodolo is a must-roster player in fantasy baseball and you can use his strikeout numbers to boost up a lesser strikeout arm on your team – perhaps like Chris Flexen, as mentioned above?

Kelly’s eight shutout innings last night dropped his ERA to 3.04 on the year and his seven strikeouts marked the first time he hit that number since June 13th against the Reds. The Diamondbacks pitcher generated 10 whiffs on 38 swings, including a 30% or higher whiff rate with his cutter, four-seamer, and changeup. Kelly has now allowed two or fewer earned runs in six of his last seven starts, posting a 2.09 ERA (2.91 FIP) with a 46.3% ground ball rate (43.3% for entire season) during this impressive run. He’s not going to be a big strikeout arm, but he’ll boost your team’s ratios to say the least.

Fresh off a nice extension, Ashby had a dominant outing against the Rockies last night. He allowed just two earned runs on five hits across seven innings with nine strikeouts. Ashby's slider was on full display, posting a 47% whiff rate, and his sinker also generated five whiffs on just 11 swings. When he wasn’t missing bats, he did allow a ton of hard contact – which is something to monitor going forward. If he’s going to allow more hard contact than we’d like, keeping his ground ball rate north of 50% is imperative. When his stuff is on, though, the Milwaukee Brewers' lefty is an excellent source of strikeouts for fantasy baseball managers.

One last thing for fantasy baseball managers to be cognizant of is if Milwaukee dials him back a bit down the stretch. In 2019, Ashby logged 126 innings in 2019, didn’t pitch in 2020, and threw just 94 innings last season. He’s already at 76 innings this year, so how willing are the Brewers to push their 24-year-old southpaw above his previous career-high? It’s also something to monitor for sure.

After being blanked by Merrill Kelly last night, I’m in on a bounce back for the Giants this evening. Tyler Gilbert has been better at home this year to his credit, but he still has a 5.34 ERA and doesn’t miss bats. Home runs have also been a problem for Gilbert this year, and the Giants have the ninth-highest OPS against left-handed pitching in 2022. Meanwhile, Carlos Rodón’s road ERA may be up at 3.55, but his 2.40 FIP is far below that, and he should dominate an Arizona lineup that has the 10th-lowest OPS against southpaws this season.