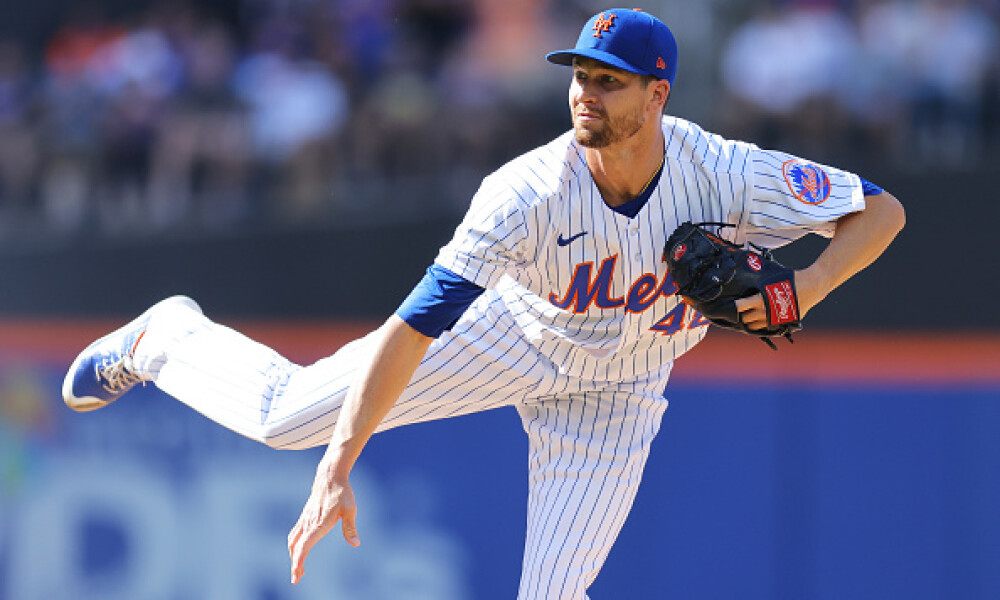 Week 17 of the 2022 Major League Baseball season is now a wrap as we prepare our fantasy baseball lineups for another round of matchups. Before closing the door on the week that was, we need to first take a look back at the top fantasy baseball news and headlines from Sunday’s MLB games. Yesterday’s action saw Jacob deGrom look like, well, Jacob deGrom, in his dominant outing against the Atlanta Braves. Plus, the Los Angeles Dodgers, Philadelphia Phillies, and St. Louis Cardinals all earned big series sweeps over the weekend. Then we had Frankie Montas struggle in his New York Yankees debut following the 2022 MLB Trade Deadline. Don't forget to check out our updated August fantasy baseball player rankings before setting your MLB lineups this week. Plus, keep track of the latest MLB injury report, the top fantasy baseball waiver wire pickups, and players trending up and down MLB projections in the fantasy baseball stock watch. So, before you start another fantasy baseball week, let’s go back and look at yesterday’s top performances. We'll wrap things up with a couple of my favorite MLB player props and best bets for Monday's action. Be sure to check out today's MLB weather report and the confirmed MLB lineups before locking in your MLB DFS lineups as well!

It had been a while since we saw the New York Mets' ace pitch at home, but Jacob deGrom didn't disappoint. His dazzling return to Citi Field yesterday included 12 strikeouts and a perfect-game bid into the sixth inning against the Atlanta Braves. By taking four out of five games from the weekend series with the second-place Braves, the Mets nearly doubled their NL East division lead – from 3.5 to 6.5 games.

The Los Angeles Dodgers were clearly motivated to prove a point against the Padres this weekend. They swept a three-game series against San Diego to take a 15.5-game lead in the NL West. This comes after the Padres made serious waves at the MLB trade deadline by acquiring Juan Soto. Los Angeles, though, was not active at the deadline and missed out on the Soto sweepstakes. Besides taking Joey Gallo off the Yankees’ hands, the Dodgers seem content with their roster with the playoffs two months away. LA beat this All-Star Padres team three times by a combined 20-4 over the weekend and have now won eight in a row and 30 of their last 35.

Rob Thomson has done a remarkable job after taking over as the Philadelphia Phillies interim manager in early June. The Phillies have gone 38-19, including 10 wins over the last 11, under Thomson for a crazy .667 winning clip. This has come after a bad 22-29 start under Joe Girardi. Philadelphia blitzed the Nationals at Citizens Bank Park in the four-game weekend series. Eight Phils combined to hit 14 home runs to set a franchise record for the most homers in a single series. The last team that hit that many homers in a series was when the Blue Jays smacked 15 against the Red Sox in 2021. The Phillies moved into the second NL Wild card spot with a half-game lead over the Padres and play 28 of their next 35 games (80%) against teams with losing records.

For the second straight season, Alex Kirilloff will have season-ending surgery as the Minnesota Twins youngster struggles to stay healthy. This year, it is ulnar shortening surgery for his right wrist after last season’s procedure to repair a torn ligament in the same wrist. Kirilloff, 24, was a highly-touted prospect who went 15th overall in the 2016 MLB Draft. He was considered to be among the top 35 prospects in baseball for three straight years from 2019 to 2021. His wrist has been a major issue, though, in both the majors and minors. Through 104 games, Kirilloff has an unimpressive slash of .251/.295/.398 with a horrible 90 wRC+ – which has led to much speculation as to how much the wrist is affecting his bat.

Don’t look yet, but the Yankees are struggling. They are 6-10 since the All-Star break and have gone just 9-16 since winning the first two games of a series in Boston in early July. Frankie Montas, the Yankees' big trade deadline acquisition, had his worst start of the season in his New York debut – allowing six runs over three innings to the surging Cardinals. The 12-9 loss capped the first three-game sweep of the Yankees this season and extended the team’s season-worst losing streak to five. On July 8, the Yankees were on a pace to break an MLB record for wins in a 162-game schedule – but things have cooled off a bit. They still maintain a big lead in their division but have lost ground to the Houston Astros (70-40) for the top AL seed in the postseason.

We have picked on the Angels lineup all season long – so why stop now? Irvin has won three of his last four games and has a 3.08 FIP, 2.25 ERA, and 0.81 WHIP over his last five starts. His 3.04 ERA on the season ranks 21st in MLB and he's the only pitcher in the top 25 with fewer than eight wins. However, he gets a pass due to the Oakland team he pitches for. Tonight, Irvin faces an Angels offense that is striking out 24.3% to left-handed pitching (fifth-worst in all of baseball) with a team .127 ISO/.286wOBA (also bottom-five). Irvin is not a huge strikeout arm but has at least four Ks in four straight starts with eight coming against the Rangers two weeks ago.