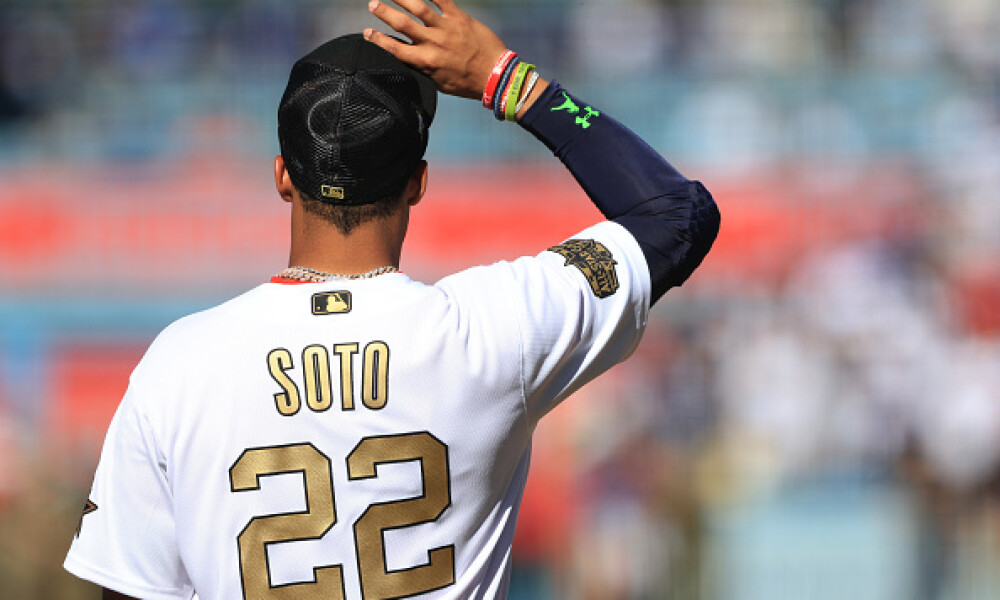 Those that waited until the season finale to tune into the 2022 MLB Trade Deadline were not disappointed! We had major fantasy stars like Juan Soto, Raisel Iglesias, Whit Merrifield, and Josh Bell get moved before the final bell. These players changing teams will surely affect the August fantasy baseball player rankings and the rest-of-season MLB projections. We also saw MLB top prospects like C.J. Abrams, Robert Hassell, James Wood, and Ken Waldichuk transition to other squads for your dynasty fantasy baseball lineups. Check out our MLB Trade Deadline Tracker for Colby Conway's fantasy breakdown of every move. After all the dust settled, there were still 16 MLB games to play on Tuesday that were full of fantasy baseball takeaways. We saw Jacob deGrom’s return from the MLB injury report, Kevin Gausman’s dominant outing, and Eloy Jiménez getting his groove back. Be sure to check out the latest fantasy baseball waiver wire pickups, our fantasy baseball player spotlight series, and players trending up and down in the fantasy baseball stock watch. If you're building MLB DFS lineups on Wednesday, check out our MLB daily projections, the confirmed MLB lineups, and MLB weather report updates. Now let’s take a look back at the top MLB performances, MLB trades to know, and key fantasy baseball news from a fun night of baseball on Tuesday.

There was certainly plenty of Juan Soto smoke over the last several days, but the Padres finally lit the match and started the fire on Tuesday. San Diego traded away C.J. Abrams, MacKenzie Gore, Luke Voit, and a boatload of prospects for the uber-talented Soto and Josh Bell. There was a little bit of drama when Eric Hosmer (first included in the deal) activated his no-trade clause, but it eventually got done by swapping in Voit.

The Padres, who also added Brandon Drury on Tuesday and Josh Hader on Monday, are clearly going for it all this year. They fortified their offense, gave the bullpen an elite arm, and already have a stout pitching rotation. Oh yeah, and they expect Fernando Tatis Jr. back within a week or so.

The San Diego-Los Angeles Dodgers regular season matchups and playoff series are now must-watch TV. The winner would be the clear favorite to come out of the NL for the World Series.

Raisel Iglesias, one of the more reliable closers over the last few seasons, was traded to the Atlanta Braves at the deadline. The Braves, of course, already have another reliable closer in Kenley Jansen. This move almost eliminates any fantasy relevancy for Iglesias, except in Saves+Holds leagues. He might pick up a few rogue saves when Jansen can't pitch, but he is no longer the clear No. 1 option on his new team. For what few saves chances the Angels will have this season, Ryan Tepera probably gets the shot at most of them, although José Quijada got the save on Tuesday night.

In a surprising deal that seemingly angered both team’s fan bases, the New York Yankees sent starting pitcher Jordan Montgomery to the St. Louis Cardinals for fan favorite Harrison Bader. “Gumby” Montgomery now helps fortify a Cardinals’ rotation looking for help to compete with the mighty pitching staffs of the Mets, Brewers, and Dodgers in the National League. The Yankees, meanwhile, get an extremely strong defensive center fielder, but one who has been hurt most of the year and is still on the Injured List.

For fantasy purposes, not much changes for either player. Montgomery was snake bitten by a lack of run support in New York – so hopefully that luck turns around in St. Louis. If Bader can return healthy, he instantly becomes the Yankees' platoon center fielder against lefties and should provide plenty of on-base and stolen base potential as a utility/late-game outfielder. Bader did have 15 steals in 72 games this year before going on the IL.

Whit Merrifield going to Toronto for a couple of prospects may have been the most shocking deal of the day. It's not necessarily because of the players, but rather because of the destination. Just a couple weeks ago, Merrifield missed Kansas City's series played in Toronto because he was not vaccinated. Apparently, he has had a change of heart about that because the Blue Jays made the deal to bring him in for the stretch run.

A player with Merrifield’s ability to get on base and grab extra bases via steals is sure to make his way into the lineup most days. That likely means that players like Santiago Espinal and Cavan Biggio see less playing time moving forward. It’s possible Merrifield becomes a super-bench player, but I imagine Toronto finds a way to get him into the lineup more often than not. Instead, the Jays save Espinal and Biggio’s versatility for wherever else they need it.

The long-awaited return of Jacob deGrom came on Tuesday as he fired up five innings of one-run ball against the Washington Nationals. deGrom would strike out six and only needed 59 pitches to make it through five innings, touching otherworldly numbers on the radar gun as well.

It’s possible the best transaction made for any club on trade deadline day was the Mets activating deGrom for the final two months. If he can remain healthy – a huge "IF" right now – this is a pitcher that can single-handedly win a team a playoff series. Feel free to get him right into your fantasy baseball lineups, because he looks back to normal.

After a very rocky start to the second-half of this season, where he allowed five earned runs to the Cardinals and couldn’t make it out of the fifth inning, Gausman was firing on all cylinders yesterday. He pitched eight innings, struck out 10, and only allowed two baserunners against the Tampa Bay Rays.

Gausman likely can’t overcome Justin Verlander or Shane McClanahan at this point to win the AL Cy Young, but he and the Blue Jays made a serious statement last night that they are real contenders in the AL playoffs. Toronto is one of the sneakier winners of the trade deadline too after adding Whit Merrifield, Anthony Bass, Mitch White, and Zach Pop.

Eloy Jiménez Finally Getting Back on Track

Playing in just his 29th game of the year, Eloy Jiménez put up one the best stat lines of his season – going 3-for-5 with a run and four RBI. This concludes a four-game stretch where he has gone 9-for-16 with a home run and two doubles. After so much time missed, it seems Jimenez is finally getting his power stroke back.

This 10-game stretch of healthy games is sadly his longest of the season so far. Still, if Jimenez can maintain health and keeps batting in the top third of the Chicago White Sox order, this could be a fantasy difference-maker down the stretch. Despite all the injuries, Jimenez’s exit velocity is in the top ten percent of the league.