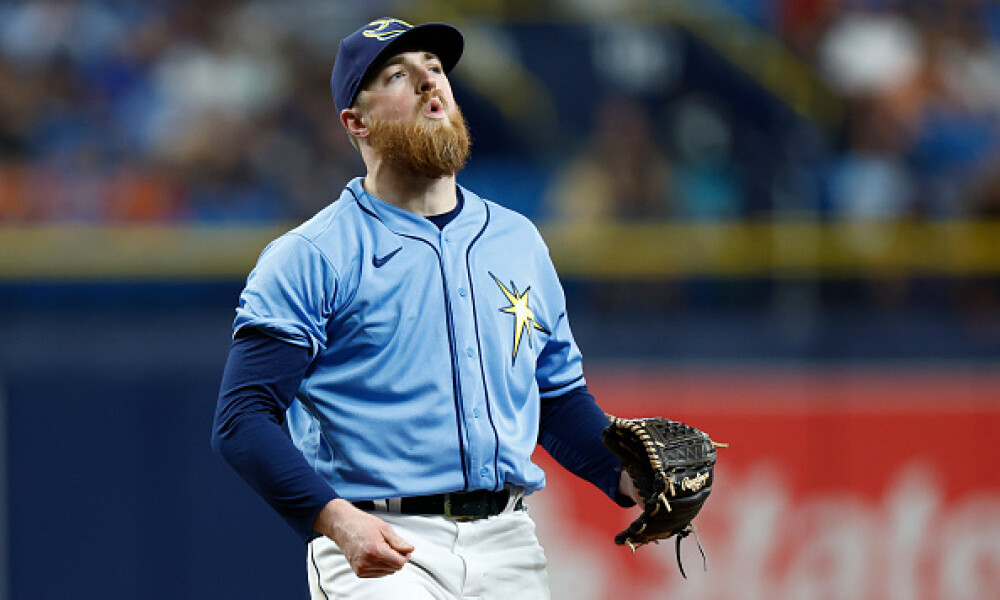 Another week of the Major League Baseball season is in the books as you prepare your fantasy baseball lineups for the homestretch. Before closing the door on the week that was, we need to first take a look back at the top fantasy baseball news and headlines from Sunday’s MLB games. Yesterday’s action saw Tampa Bay Rays pitcher Drew Rasmussen nearly throw the first MLB perfect game in a decade. Meanwhile, Michael Wacha returned from the MLB injury report with a big performance in a Yankees-Red Sox rivalry matchup. Plus, Blake Snell is looking like the Snell of old and continues rising up the fantasy baseball rankings and the MLB projections. We also had Brady Singer snap the Los Angeles Dodgers' win streak, though the NL favorites will be getting Dustin May back from injury soon. Don't forget to check out the latest fantasy baseball waiver wire pickups, our fantasy baseball player spotlight series, and players trending up and down in the fantasy baseball stock watch. If you're locking in any MLB bets or MLB DFS lineups on Monday, keep an eye on the confirmed MLB lineups and MLB weather report. So, before you start another fantasy baseball week, let’s go back and look at yesterday’s top performances – plus my favorite MLB player prop for tonight.

He was so close! Tampa Bay Rays starter Drew Rasmussen’s bid to become the first pitcher in a decade to throw a perfect game was halted by a lead-off double in the ninth to the Orioles’ Jorge Mateo on Sunday at Tropicana Field. The last perfect game in the MLB came on Aug. 15, 2012, when Mariners pitcher Félix Hernández was perfect against the Rays in Seattle. Matt Garza still remains the only Rays pitcher ever to throw a no-hitter.

What a Return by Michael Wacha in Yankees-Red Sox Rivalry!

Wacha returned after almost two months on the Injured List and threw perhaps the best outing of the season for the Red Sox as they clinched their weekend series with the Yankees. He went seven innings and only allowed two hits (zero walks) on nine strikeouts as Boston inched its way back into the AL Wild Card picture. The Red Sox are now 4.5 games back of the Rays, who hold the last spot at the moment.

Singer (6-4) was an ace yesterday for the Kansas City Royals. He pitched one-hit ball and struck out seven over six dominant innings as the Royals ended the Los Angeles Dodgers’ 12-game winning streak, blanking them 4-0. A day after hitting six home runs, the Dodgers were held to just two hits as they were trying to match their longest winning streak since moving to LA. They still have the majors' best record at 79-34 and will be looking to start another streak tonight as they travel to Milwaukee.

Dustin May Ready to Return for Los Angeles Dodgers

Can the Dodgers get even better? They sure can, as Dustin May is set to make his return after coming back from Tommy John surgery. He made his final minor league rehab start for Triple-A Oklahoma City last night and was amazing. May tossed an immaculate inning en route to a 70-pitch (54 strikes) start where he went five innings and allowed four hits, an earned run and struck out 10 batters! He is scheduled to start Saturday night at home against the Marlins once he returns to the Dodgers rotation.

Is Blake Snell Finally Back?

It seems like ages ago when Blake Snell utterly dominated the Dodgers for 5.1 innings in Game 6 of the 2020 World Series. Much to his and many Tampa Bay Rays' fans disappointment, he was pulled early by manager Kevin Cash and the Rays went on to lose the game and the series. Snell was then traded to the San Diego Padres that offseason and has been a mess for the last two years.

Is he now back, though? Snell has made five starts since the All-Star break and has posted a 0.94 ERA, 0.91 WHIP, and 39 strikeouts against five walks in 28.2 innings pitched. He has allowed one or zero runs in six of his last seven starts and has 57 strikeouts in his last 37.2 innings. This is great news for the Padres, who can use all the help they can get as they are fighting to hold onto a Wild Card spot in the NL.

Dustin May Ready to Return for Los Angeles Dodgers

Can the Dodgers get even better? They sure can, as Dustin May is set to make his return after coming back from Tommy John surgery. He made his final minor league rehab start for Triple-A Oklahoma City last night and was amazing. May tossed an immaculate inning en route to a 70-pitch (54 strikes) start where he went five innings and allowed four hits, an earned run and struck out 10 batters! He is scheduled to start Saturday night at home against the Marlins once he returns to the Dodgers rotation.

The Atlanta Braves have kept the pressure on lately, but the New York Mets have maintained first place in the NL East. The Mets have won eight of their last nine, 10 of their last 12, and 17 of their last 20 – and most of those games have come against divisional opponents. The Phillies, who came into Citi Field this past weekend having won 12 of their last 14 games, are the latest casualties of the Mets' dominance. They will now travel to Atlanta for a huge four-game series this week. Even if they split the series, it could be lights out for the Braves in the divisional race as they are already 5.5 games back.

Carrasco has now struck out at least six in four of his previous five starts and one of those was a six-strikeout game against this same Braves offense just a couple of outings ago. Over the last 15 days, the Braves are striking out at a 27.9% rate against right-handed pitching – the second-highest rate on tonight's slate behind only the Tigers. Carrasco, the veteran right-hander, is having one of the best seasons of his career with a 3.76 ERA and 1.28 WHIP in 124.1 innings. Plus, he's been lights out against the Braves this season, holding them to only three runs across 14 innings.