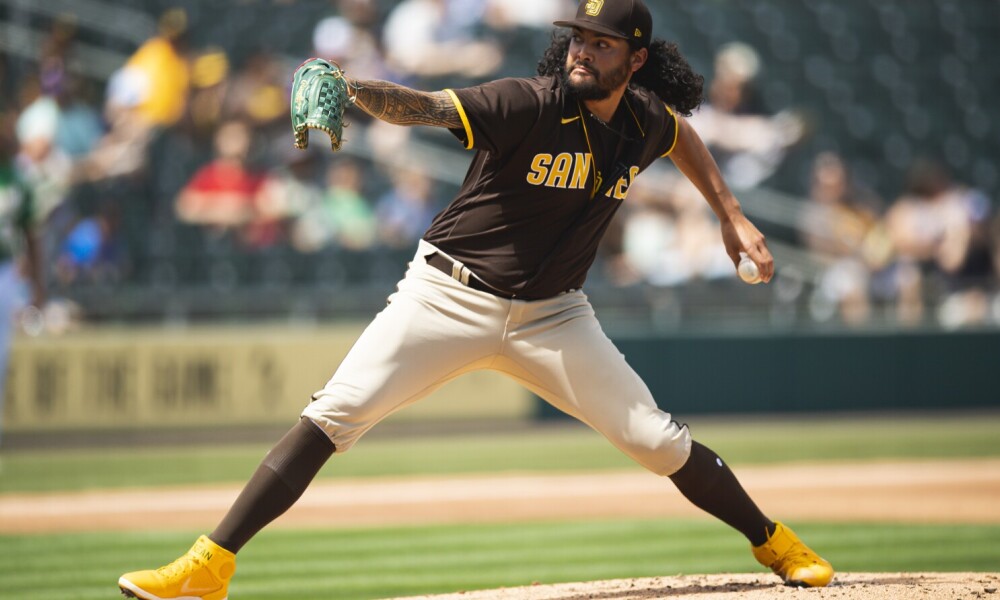 Fantasy baseball players had their heads spinning this past weekend as MLB teams continued to make last-minute tweaks to their Opening Day rosters. We saw a few MLB trades that should impact fantasy baseball closer situations, as well as a few MLB injuries that will, most definitely, affect playing time. And in the middle of all that come the usual highs and lows of 2022 spring training as fantasy baseball rookies are born while some fantasy baseball veterans heading back to the showers, for good.

In the meantime, let’s wrap up what went down this weekend.

From a fantasy baseball perspective, there’s not much that changes with Manaea’s move to San Diego. He’ll definitely see more opportunity for wins, so that’s a plus, but the ballpark shift is neutral and we already have a pretty good idea as to what he is capable of doing.  Expect a little more than a strikeout per inning with an ERA that sits between 3.50 and 4.00 for the season. Coming back to the A’s will be INF Euribiel Angeles and RHP Adrian Martinez, neither of whom are going to be impacting fantasy teams anytime soon. Martinez could get some work later on in the season, but investing in an Oakland pitcher is not something we recommend.

The Marlins are giving up a compensatory draft pick, Antonio Velez, Kevin Guerrero and a player to be named later to bolster their bullpen here. With Dylan Floro opening the season on the IL, the Marlins felt the need to add more relievers. Both Scott and Sulser have closing experience so there’s a chance one or both find themselves into the saves mix with Anthony Bender and Anthony Bass. It’s not an ideal situation, but this does give manager Don Mattingly some options. Mattingly usually likes to go with one guy in the role, so keep an eye on this battle early on in the season and see who comes out on top. On the other side of this, by the way, most people are turning to Dillon Tate as the new closer for the Orioles, now that Sulser is gone. I’ve ben digging into the situation and, if looking for some saves, though it won’t be a ton, keep an eye on Baltimore right-hander Jorge López. Based on what I’ve seen and heard, he could be the guy you want with Paul Fry being the next up.

Trouble brewing on the South Side it seems as Lynn is now headed for surgery to repair a “slightly-torn” tendon in his right knee. The early estimate is that he won’t be able to throw off a mound for at least four weeks and, from there, he will need to build his arm strength back up. That sounds like late May at the earliest. Assuming you’ve already drafted, you’ll have to hit that waiver wire ASAP, but I wouldn’t look to Vincent Velasquez who sounds like he’ll be the early choice for rotation replacement. That guy will put you behind the proverbial eight-ball with regard to your ratios, so look elsewhere. If you haven’t drafted yet, I’ve pushed Lynn down in my rankings, right near where people are looking to draft other injured starters like Luis Castillo and Jacob deGrom.

Man, this one hurts a lot. You’ve heard me, you’ve heard Jim Bowden and you’ve even heard Tigers manager A.J. Hinch gush over Greene. Kid was slashing .429/.500/1.048 with three doubles, two triples, two home runs and four RBI this spring and looked like an absolute stud in the field, making acrobatic catches and smart throws to the infield on plays. Hinch said Greene’s instincts were what he loved most. Well, now a broken foot is going to sideline him for at least six weeks with a broken foot and who knows how long before he really gets himself back. I’ll settle in on the 6-to-8-week timetable and stash him in leagues with unlimited IL spots. If I’m in a roster pinch, then I’ll look to cut him. Sigh.

Here’s another bummer of an injury as Rojas was expected to be the starting third baseman while already having eligibility at second base, shortstop and the outfield. We were all set and ready to add third base and corner infield eligibility by the first of May and now we have to wait until at least then to get Rojas back on the diamond. It’s being labeled a Grade-2 oblique strain, so I’m going to expect him to miss the first month of the season before I’m ready to get him back into my lineups.

Last week it was an oblique issue that sidelined Meadows and today it’s quad tightness; in both legs. It doesn’t sound like it’s going to be a major issue, though he is out for Monday’s spring game. We’ll check in on him and his status for Tuesday’s game. While this may be something minor, keep in mind that with the abbreviated spring, we are going to see a lot of this throughout April. Don’t panic, but definitely make sure your bench depth is up to snuff and not loaded with guys who won’t see the majors until later in the year.

Look at that – Scherzer isn’t with the Mets for even one season and he’s already dealing with injuries. What is up with the Mets training staff? OK, so it’s only hamstring tightness, but he missed Saturday’s start and won’t throw a bullpen session until Tuesday where the team will then make its evaluation for Opening Day. Manager Buck Showalter didn’t sound all that confident as he said the team would make Opening Day a bullpen day if Scherzer couldn’t go, so stay tuned for all the latest developments. A bullpen day on Opening Day? SMH. I suppose they don’t want to mess with anyone else’s schedule or routine.

While this was long expected, it wasn’t officially announced until over the weekend, but welcome to the Bobby Witt Jr. ERA, everyone! Through 11 spring games (30 at-bats), Witt Jr slashed .400/.438/.700 with three doubles, two home runs, seven RBI and two stolen bases. He also drew a pair of walks and only struck out three times. Witt Jr. will be the Royals starting third baseman to open the season which means that, by May 1, he will have multi-position eligibility around the diamond with shortstop and third being the base. The ability to move him around your roster to both middle and corner infield will be a huge help once injuries start rolling in and you need to make some waiver claims. And for those of you who can bet on MLB futures, you’re not going to get longer odds than +310 for him to win the AL Rookie of the Year, so you may as well place that bet now.

Another expected moment here, but one that deserves recognition and praise. Still wish Tork had Greene by his side throughout this rookie campaign as the two would likely feed off each other’s energy, but there’s no use crying over spilt milk. Torkelson earning the starting nod at first base to open the year for the Tigers is big and if you’re in a shallow league where maybe he wasn’t drafted, you’ll want to throw in that waiver claim for sure, especially if you need power and some corner infield help. With the path to at-bats set, we like Torkelson for 25-30 homers even here in his rookie season. The RBI total may be a little light for such an esteemed power hitter, but that will improve as the Tigers improve. Keep an eye on the plate discipline because he’ll be pretty amped-up to start the year, but even if he hits .250 on the season, that’s pretty darn good these days.

Very little had been said about Pena before the MLB lockout and very little was said about him afterwards. The expectation was that Houston was going to re-sign Carlos Correa and if that didn’t work, then Trevor Story would be their fallback. Well, neither came to fruition and while that was all going on, Pena was slashing .389/.421/.778 with one double, two home runs and eight RBI over 18 spring at-bats. And not only has Pena worked his way into the starting shortstop job, but he’s also now seeing at-bats near the top of the lineup. He flashed some speed in the minors, but, more importantly, he’s always been a great OBP guy, so while he’s spent the majority of the spring in the eight-hole of the order, keep a close watch to see if they bump him up. If they do, his value is definitely going to spike with the increase of at-bats.

Another official announcement we at Fantasy Alarm saw coming. If you had listened to the Fantasy Alarm Show interview with Mariners President of Baseball Operations Jerry Dipoto on SiriusXM Fantasy Sports Radio, you would have already been bumping Brash up your boards. Not only did Dipoto rave about him when I asked about the back-end of the rotation prospects, but we also discussed on-air, the text Dipoto sent Jim Bowden afterwards, hammering home the point that Brash was one to watch. We should be looking at the possibility of 120 innings with an ERA between 3.50 and 4.00 and just over a strikeout per inning. The Mariners are going to be a sleeper team all year long too, so expect him to get his share of the wins as well.

And so the curtain closes on yet another storied career. Upton had his fair share of 30-homer seasons and he even had one 20-20 and one 30-20 season. Actually, he had 10 really good years, both in reality and fantasy, but injuries marred both the beginning and the end of his time in the majors. And now, despite slashing .333/.474/.933 with thee home runs and 11 RBI over just 15 spring at-bats, the Angels decided to part ways with the former star and designate him for assignment. They just have too many young, capable players in the outfield and Shohei Ohtani handles the DH work. It is possible Upton re-emerges somewhere else, but for now we will bid him a find farewell.