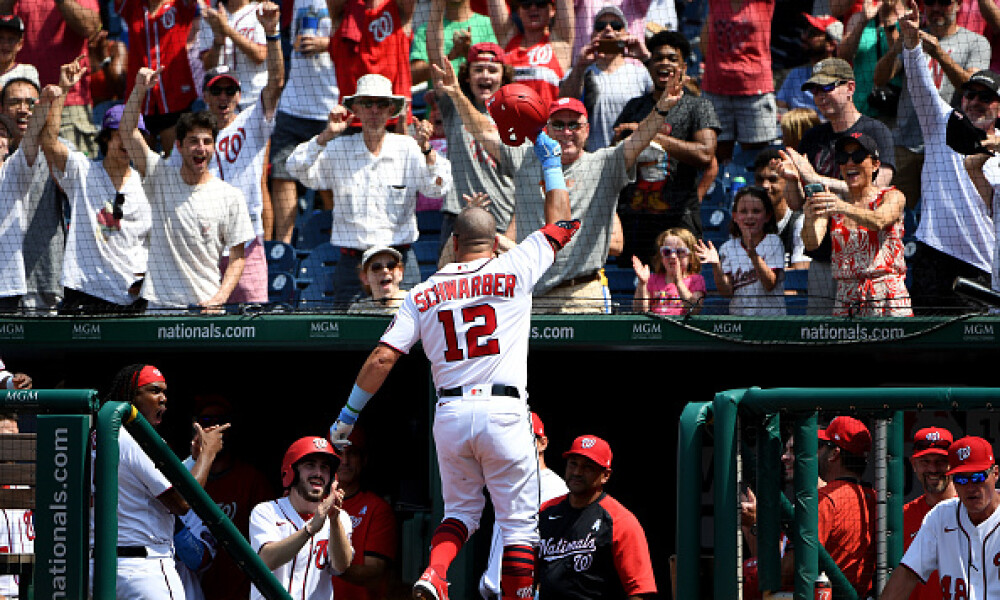 There was no rest for the weary as Monday brought us an incredible day in sports across the board. The Stanley Cup Finals opened up with a bang as the Tampa Bay Lightning beat the Montreal Canadiens in Game 1 of the Stanley Cup Finals, the Los Angeles Clippers staved off elimination with a big win over the Phoenix Suns in Game 5 of the NBA Western Conference Finals and we continued to see some historic performances throughout the MLB games. Our team crushed the Showdown Slates for basketball and hockey, which you can find over at DFS Alarm. For here, we’ll lay out what went down in the baseball world as we rapidly approach the mid-point of the fantasy baseball season.

Schwarber’s Got the Power

Like He-Man raising his sword and screaming, “By the power of Grayskull,” Kyle Schwarber steps to the plate with bat in hand in an other-worldly fashion. He blasted another two home runs against the Mets on Monday, giving him 11 home runs in just nine games. Four of those games have been multi-homer performances and he’s literally become a one-man wrecking crew. The Nationals are 7-2 in these games and Schwarber, who now has 24 home runs and 52 RBI on the season, has raised his batting average from .227 to .253 in that span. If you have him on your roster, enjoy this tremendous power surge. If you don’t, find your power elsewhere because trading for him right now is going to cost way too much.

While Schwarber is pushing his way into the competition rapidly, this duel between Shohei Ohtani and Vladmir Guerrero Jr. continues to be one of the more exciting back-and-forths we’re seeing in baseball right now. Guerrero held the lead with 26 home runs going into yesterday’s games, but with the Blue Jays off and the Angels visiting hitter-friendly Yankee Stadium, it was another opportunity for Ohtani to catch up. And that’s exactly what he did when he took Michael King deep in the first innings for his 26th home run. The two are going to go back and forth here to the end of the first half and it should be interesting to see if either slows down for a stretch in the second half. And let’s also not forget about Fernando Tatis Jr. who is sitting on 25 home runs himself. All three are incredibly dynamic players and the hope is that MLB will finally get out of its own way and learn how to support and promote all three, because let’s face it…all three should be strong candidates for the MVP award this year, not just the home run title.

While he’s not even close to the level of the aforementioned four home run hitters, Boston’s Hunter Renfroe is white-hot at the plate right now and enjoyed a multi-homer game himself yesterday. He had a six-game hit streak going which came to an end during the final game against the Yankees, but immediately picked it back up with a pair of home runs, one off Royals starter Danny Duffy and the other off reliever Josh Staumont which proved to be the game-winner. He’s got the average up to .272 now after hitting safely in 10 of his last 12 games and remains a good enough No. 5 outfielder for your fantasy teams.

While Renfroe lost his six-game hit streak, there are still a few players who extended their current streaks to which we should pay attention. Pirates outfielder Bryan Reynolds extended his hit streak to 13 games with a 1-for-4 performance in yesterday’s loss to the Rockies. Angels second baseman David Fletcher (13) and Yankees infielder DJ LeMahieu (11) both extended theirs, each with one hit, Luis Urias of the Brewers bought his up to 11 and a pair of Giants, Evan Longoria and Brandon Belt pushed to 10 and nine games respectively. If you play in a league with daily roster moves, pay attention.

The Pitching is Good but Not Great

For the first time in a while, we don’t have any starting pitching to rave about. Sure, Trevor Bauer and Freddy Peralta tossed quality starts, allowed just two runs each in seven innings and they each punched out eight, but those were really the best of the best. That is if you don’t want to talk about Kyle Freeland’s fie scoreless innings against the Pirates. The Spider Tack issue continues to take center stage for baseball, which could mean a sharp decline overall in starting pitching. If you are struggling on the pitching side in fantasy, hold off for now before doing anything dramatic to shake up your team. Focus on your place in the offensive categories and see what transpires over the next few weeks. The early part of the second half should tell the story and dictate where your moves should be for the stretch run.

While the White Sox and Twins got rained out yesterday, there won’t be a doubleheader today. You will, however, get Lucas Giolito and Kenta Maeda on the mound for their game tonight which should be a solid pitching duel. We’ve got some decent starters tonight in Trevor Rogers, Brandon Woodruff and Jose Urquidy, but the marquee match-up comes later tonight with Kevin Gausman facing Walker Buehler in that heated Giants/Dodger rivalry. That should be a nice game to settle into for the late night.

You should always check out the MLB Best Bets and Prop Bets over on Wager Alarm if you’re looking to lay some action on the games, but if you’re just looking to see who the big favorites are for streaming in your fantasy league, well, you’ve got Coors Field action tonight so make sure all of your Pirates and Rockies are active, as well as your Padres and Reds. Those games have totals of 11 and 10 respectively and both are favored to go over as of right now.

The Brewers are the heaviest favorite tonight as they are -235 to beat the Cubs. The Blue Jays fall in next as a -225 favorite over the Mariners and then the Red Sox are a -215 favorite over the Royals in a game that also has a total of 10.5, though the money line on that one tilts towards the under.

Get those lineups set and best of luck to you all tonight!