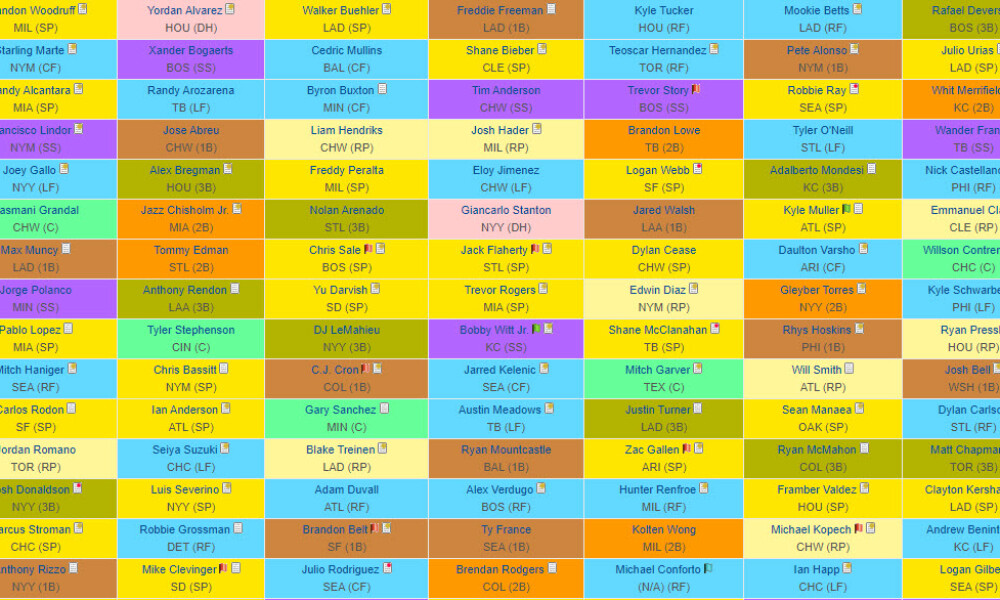 With the start of the 2022 fantasy baseball season on the horizon, I had the good fortune of receiving an invitation into Tout Wars, the premier analyst league. No amount of fantasy baseball mock drafts can prepare you for what is considered the gold standard of competition for accomplished fantasy baseball players. To keep up with the trend of home leagues exploring different scoring settings, the Tout board made this 12-team Mixed League with three unique settings: On-Base Percentage over Batting Average, Saves+Holds, and Innings Pitched instead of Wins. These happen to be three of my favorite tweaks for leagues looking to find some balance between fantasy and what actually matters in real-world baseball. Here’s a glimpse into my decision-making regarding the three for any of you interested in trying these unique settings.

I don’t go overboard on pushing up AVG or OBP after the first few rounds. A solid base early makes it a luxury to not have to force picks that bail you out down the road. Passing on Mike Trout was hard but he’s very likely a four-category player at this point. While that performance is elite in those four I really want something in every category out of my first pick if possible. Shohei Ohtani was there and I’m very happy to land him anywhere in the first round. The AVG/OBP are palatable even if a cut below elite. Ohtani is basically the only player with a projection floor of 40/20 and a ceiling in the 50/25 range. That’s a top 3 profile in my eyes. Getting to pair him with Freddie Freeman, who’s been an OBP stud for the better part of a decade is a dream start. After that, I was able to take the best available players until I shored up my OBP in the 14th/15th rounds with up-and-comers in Alex Verdugo and Ty France. Getting on base is a major part of both of their games.

This is the spot I looked to exploit the most. I wanted to acquire an anchor and then forget about relievers until the end of the draft. Hader is almost exclusively the closer at this point but the risk of being a LHP is removed with this format. That makes him a surefire 1A/1B reliever to me. I’ll churn the bottom of my roster for the other two RPs I’ll want to employ but did grab two upside plays with fireballer Josh Staumont, who had an injury-plagued season, and Emilio Pagán, who figures into the Padres picture if healthy. With holds worth as much as saves there will be avenues to production via waivers without a doubt.

Again, I was looking to secure some early leverage in this category and then look for some discounted options. Getting Shane Beiber at 3.09 feels good after he had been a late first-rounder last season. The health is a potential risk. That’s a risk with every pitcher, however, so I’m always happier paying less for a guy with the upside of a top 20 player than paying for an ace in the early going. As you’ll find in most drafts this year pitching got pushed up as we got past picks 50-60. Major question marks abound as you ford those waters. My staff is no exception but again, I’m willing to embrace the chances of pitchers bouncing back for big values. My late selections of José Urquidy and Zach Plesac are just that. It helps that even if ineffective they can eat some innings for me.