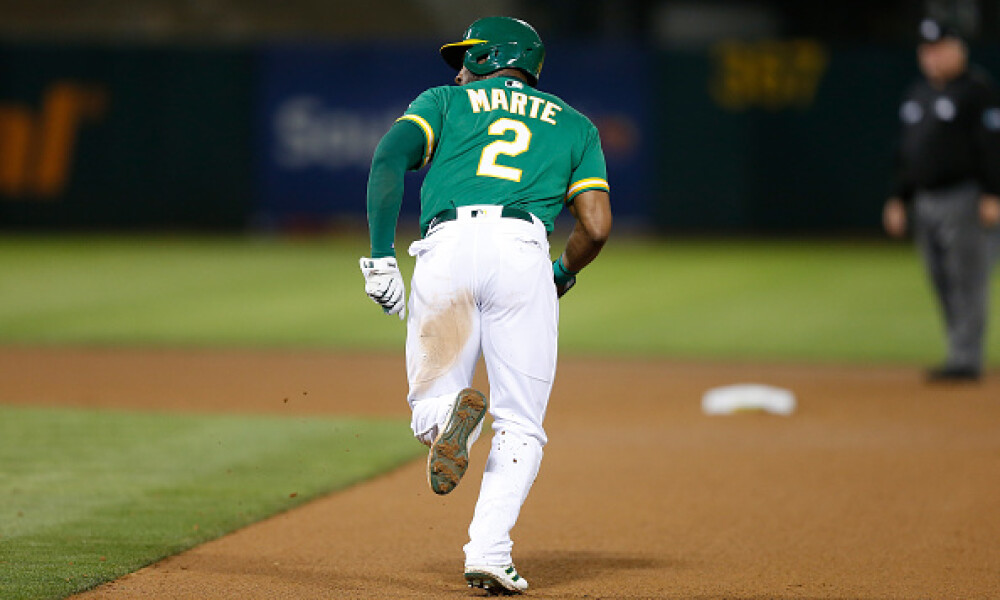 Stolen bases are quite tricky when it comes to fantasy baseball. Oftentimes, it’s the offensive category some choose to punt, or others go above and beyond to do their best to ensure that they win that category. The interesting thing about stolen bases is that drafting them can sometimes put fantasy baseball managers in a precarious situation. The guys who can do more than just run are often scattered throughout the first handful of rounds, but after that, how do you value the likes of the Adalberto Mondesi and Myles Straw types?

Speed often gets pushed up, which can lead to some disappointment for fantasy baseball managers. Ultimately, that brings us to the main question, also known as the thesis of this article.

When should I draft speed?

For starters, consider the landscape of Major League Baseball, and the fact that the overall trendline for stolen bases is down. Actually, considerably down. 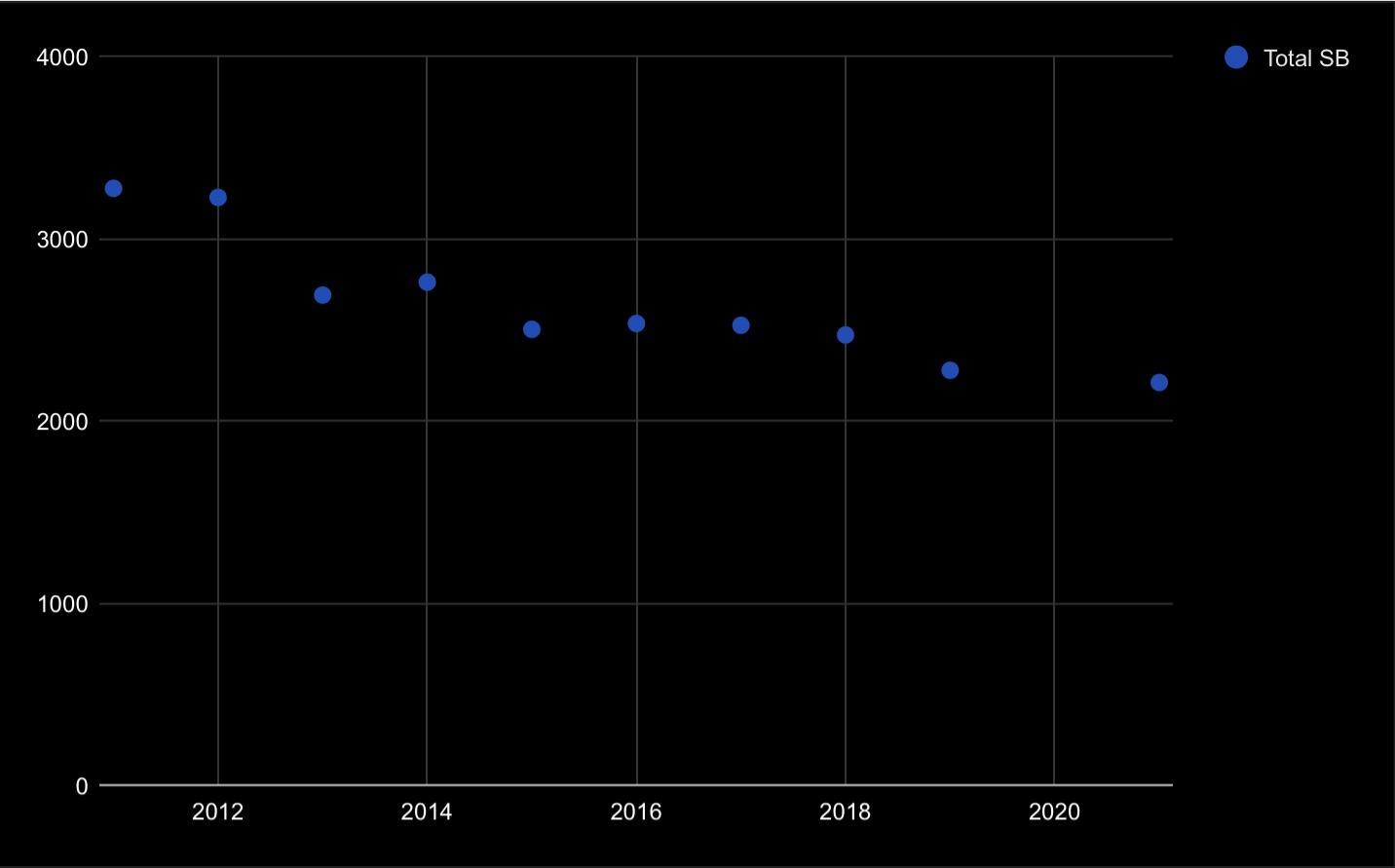 We have seen a steady decline in stolen bases dating back to 2011, and if you want to point out the jump in 2014, then since that year, it’s steadily declined. Yes, 2020 is removed from the above image, but when you look at stolen bases per game across the league, with the inclusion of the 2020 season, the trend line is of course similar. 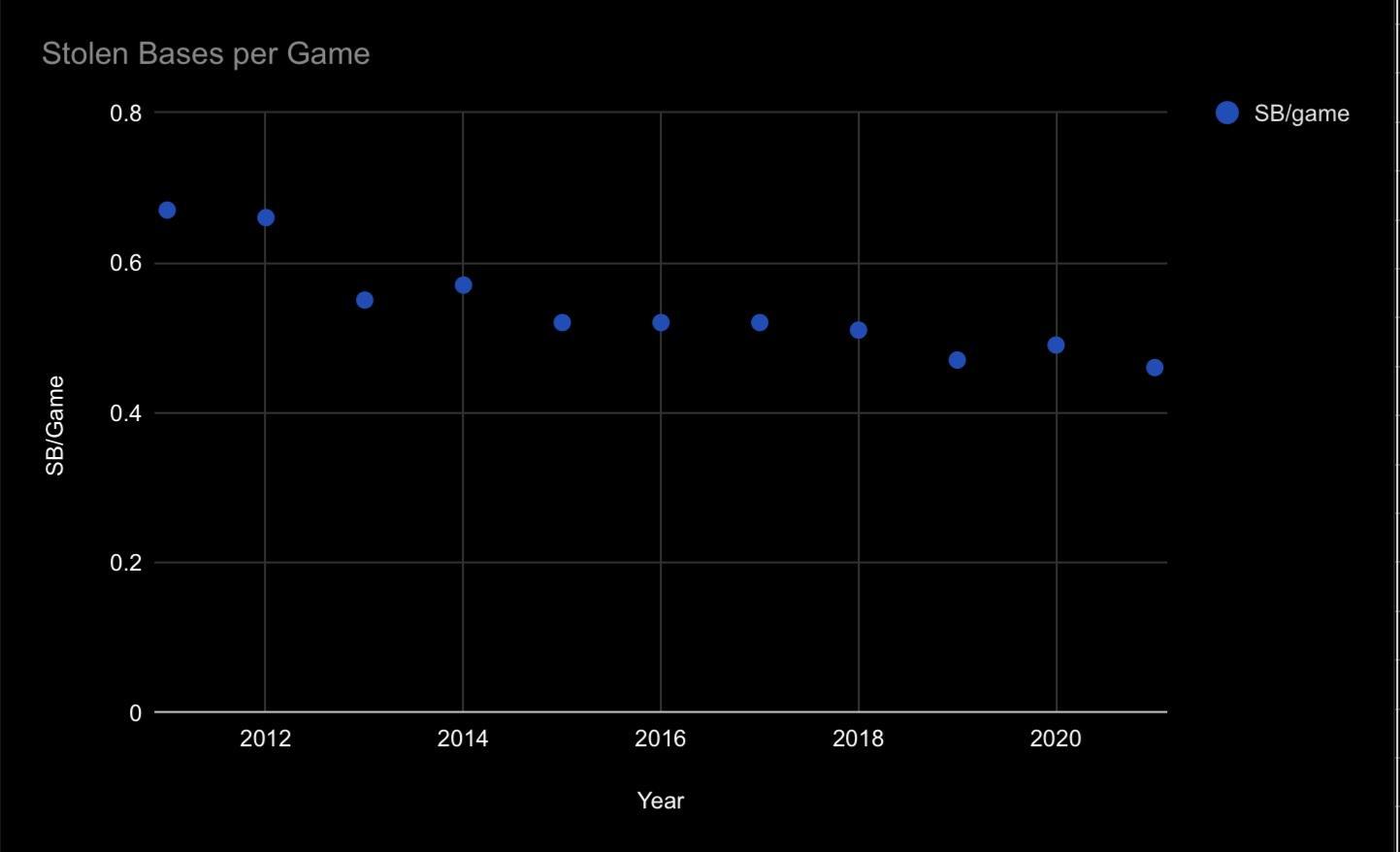 The pace for 2020 was actually slightly higher than 2018, but it doesn’t change the fact that the overall trendline is still down and to the right. If you look at The Great Fantasy Baseball Invitational

(TGFBI) over the last couple years, it’s taking less to win this category, obviously due to the decline in steals.

Data from History Tab at NFBC

*Just one outside the top 61 picks (Kevin Newman at 679). If you exclude Newman, the average ADP of these six players is 36.4

You have to pay for top tier speed, and we all know that. This is why many will overlook the red flags with Adalberto Mondesi because they only see the massive number in the stolen base column. This is why people will push up Myles Straw types (or Jarrod Dyson in years past), because they will overlook the dearth of other statistical production to boost their ranking in this one category.

For comparison’s sake, let’s take a look at this compared to home runs.

The general consensus is to aim for the 80th percentile in all categories when formulating your team. If we compare it to the overall stolen base leader from 2021 in TGFBI, we are shooting for 150 stolen bases (188 x 0.80). Your league settings will obviously come into play, but looking for a team average of double-digit stolen bases per starting roster spot is a good starting point.

Ultimately, there are a couple big misconceptions when it comes to stolen bases in fantasy baseball.

Misconception #1: I can’t win stolen bases without multiple 30+ or 40+ base stealers on my team.

You can certainly win with them, but you can without them, too. Drafting guys like this takes a concerted effort to win this category, and if you are hinging stolen bases on Adalberto Mondesi and Byron Buxton, that’s an insane amount of risk. Sure, they could combine for 80+ stolen bases, or they both get injured, and your plan has been spoiled.

This is definitely a great start for stolen bases, and you’ll get a handful of steals from some other guys that you’ll draft later. You’ll still need a little bit more than just those three for reliable production and a big point total in that category. Also, one injury, and without other options, you’re not as set as you think you might be.

So, bringing it back to the thesis, when should you draft speed?

Be careful not to sell out just for stolen bases, because if you load up on guys that only impact that category, you’re going to be playing behind the eight-ball in other aspects. If you need Myles Straw for stolen bases, you will need to find some cheap power later to even out the areas where Straw lacks reasonable production.

There’s a nice value with the guys that are projected for 10-15 stolen bases. I like investing early in a good number of stolen bases without giving up production elsewhere. Sure, if you have an early pick, Trea Turner is a no-brainer, but if you’re at the back end of the first round, a Kyle Tucker and Ozzie Albies start is very solid as well for multiple-category production. Just because a player only gives you 10 stolen bases, don’t discount that, as that is solid production over 162 games, especially with stolen bases across the league trending down. Also, from a simple arithmetic perspective, those 10 stolen bases add up, especially combined with other guys in that range.

Think about it this way: The 80th percentile in 2021 in TGFBI was 150 stolen bases, and you start 14 offensive players there, resulting in 10.7 stolen bases per starting spot. If you start 12 hitters, you’re shooting for a total of 128 stolen bases, given the 10.7 average.

You don’t need the top three or four stolen base threats to win the category. Yes, one or two of the elite guys certainly helps, but you can certainly win with quantity, too. Drafting one of the elite guys, health-willing, offers you some flexibility in that category, but it is not a requirement by any means.