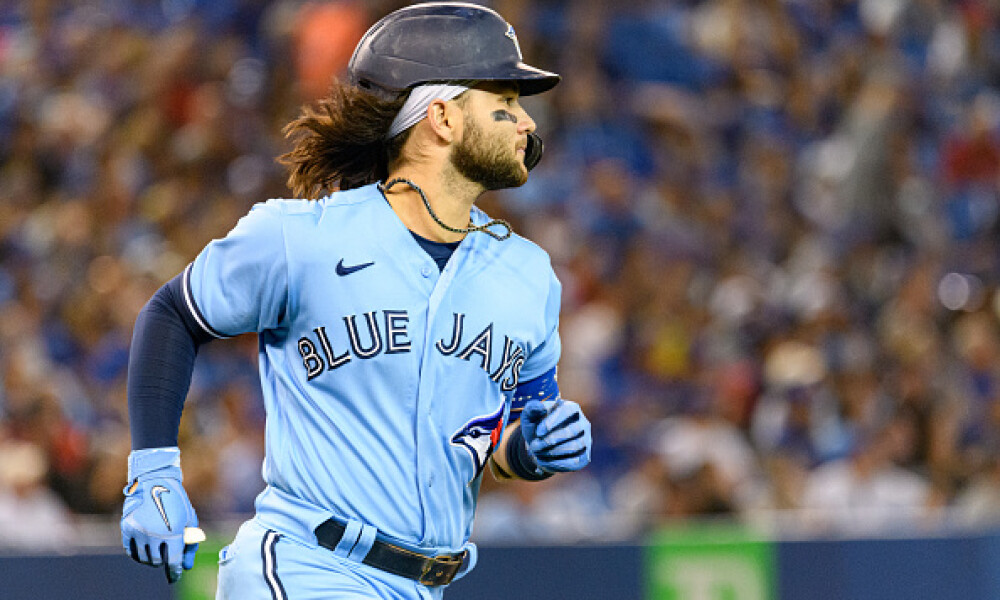 Fantasy owners are always looking for an edge. You want the best team which means the deepest team and that team would be loaded deep with high-impact multi-category contributors. Sometimes you can punt a category, for example, in head-to head formats but in normal rotisserie formats you want a balanced team that can be competitive in all categories. Hitters have five main offensive categories (batting average, runs, home runs RBIs and stolen bases) and in a perfect world you would like your lineup to be filled with five-category hitters – the alpha studs of fantasy baseball.

Here is the five-category threshold that I use:

WHO NOT TO DRAFT?

In overall element or rotisserie leagues all five categories are important. You want balanced hitters in this format, and you don’t want to overpay in one single category, for example a player with a high steal rate that comes from a flawed hitting profile.

What is a flawed hitting profile in fantasy baseball? Or what we in the fantasy world may call a one-trick pony? We don’t seem to have as many of these players like we did in years past. Weak hitting stolen base experts like Mallex Smith, Billy Hamilton and Jarrod Dyson or free swingers like Chris Carter or Adam Dunn who would hit 40 home runs but also strike out 200 times. Let’s look at a couple of players that are certainly not multi-category and may hurt your team more than help it:

Joey Gallo, OF NYY -  is a perennial leader in home runs per at bat and hard-hit rate but is also a familiar name on top of the strikeout and swinging strike rate leaders. He joined the Yankees on July 30th last season and his .160 average since that point is the lowest among all qualified batters. His inclination towards home runs and strikeouts has drawn the ire of many fantasy baseball managers and his current ADP is the lowest of his career. So, is a player that hits bombs but also has a career strikeout rate of 36.9% and is a drain in the BA category an asset or deficit to your rotisserie lineup? I trend to lean towards the latter.

Same goes for players like Tommy Pham, Andrew McCutchen, Max Kepler, and Anthony Santander. Everyday players that are either aging or are single category contributors. Take Pham for example. He came into last season with expectations in San Diego. Yes, he has an excellent eye at the plate as only Max Muncy swung at less pitches outside the strike zone and he still has speed as shown by his 14 stolen bases. All his other numbers are down, though, and there are many other players that can be drafted instead of an aging free agent coming off one of his worst statistical of his career.

Now let’s look at a couple of players that at first look like good players to draft but after a deeper dive could be fantasy landmines.

Both are solid real-life players but may be lacking a bit in the fantasy world. Both had 30 stolen bases in 2021 and were above the runs scored threshold but it all stops there. They can be considered two-category hitters (runs/steals), but they are both below .280 average and lacking in the power categories. Even more worrisome is the below average OPS (.696) from both players because major components of fantasy baseball are centered around getting on base and slugging (OPS). Both players are currently sitting in the Top 150 player rankings, but the smart move is a player like Jesse Winker, who may not be a three or four category player but is borderline in all departments with a .305 average, 77 runs, 24 home runs and 71 RBIs. Add on a great OPS of .949 and an injury filled season and you have a great pick. Or what about Adam Frazier? I am seeing Frazier ranked in the low 300s? Yes, he has a new home in Seattle, but this is a player that hit .305 in an “off season” with 83 runs and 10 stolen bases. Frazier has bat to ball prowess, can get on base and has speed that allows him to stretch singles into doubles. More importantly is his contact skills and dislike for striking out as he finished with the second lowest strikeouts in the NL last season with just 69 K’s.

It’s important to realize that the deficiencies of many players will drive down their value and cause havoc to your team as you try to fill the statistical holes on your roster. An easier and smarter way that will cause less headaches is to build a roster full of well-rounded players that will contribute across all the statistical categories. When you emphasize multi-category contributors it lets you construct deep rosters that are also flexible. The injury bug will not hurt you as bad if you target well-rounded players. On draft day you want to target multi-category players and go right after them starting right off with players that will excel in all five categories.

Before we list the five-category stars, the top round darlings let’s look at the two big categories- home runs and steals. The last member to enter the elite 40-40 Club was Alfonso Soriano of the Cubs 15 years ago in 2006. The game has changed, and we don’t have an Alex Rodriguez, Barry Bonds or Jose Canseco.

Since 2012 there have been only five players to enter the 30-30 Club. Mookie Betts (2018), José Ramírez (2018), Christian Yelich (2019), Ronald Acuna Jr (2019) and now we have Cedric Mullins who is coming off a big 2021 season where he just slid in with 30 home runs and 30 stolen bases. Mullins abandoned switch-hitting last off-season and in his first full season became the first 30-30 player in three years. He replaced Adam Jones and was pretty much forgotten in 2021 drafts (408th average overall in drafts). He was a four-category player last season with RBIs (59) being his only downfall as he struggled with runners on base (RBI rate- 11).

The 25/25 Club is becoming the milestone in this era of baseball. Last season saw five players:

Three of these players are in the elite five category group- Tatis Jr, Bichette and Turner.

Most of the stars on this list are perennial five category hitters a given and are Top 10 drafted players in all fantasy leagues. We don’t need to tell you how Fernando Tatis Jr or Trea Turner are elite players to snag in the first round. But there are a few newcomers to the list like Kyle Tucker, Teo Hernandez and Tyler O’Neill.

Teoscar Hernández, OF TOR - has turned into one of the most consistent hitters in baseball. Early in his career he was a raw power, low batting average player but over the last two seasons he has improved to the point of becoming a fantasy must-have. He has shown an improved line drive rate (19% in 2019 to 25% in 2021) that has been key in increasing his BABIP every year from 2019 (.293), 2020 (.348) and 2021 (.352). These increases and a lower strikeout rate have all helped to boost his numbers to where his current draft rankings in the mid to late 20’s.

Kyle Tucker, OF HOU -  will be a new target in the elite tier as the young hitter provides both power and speed hitting behind some real professional hitters in a great Astro lineup. Besides his five category numbers Tucker had .359 OBP and .557 slugging for an OPS of .917. He could even see his steal rise making him a favorite fantasy and dynasty asset in the next few years.

Tyler O’Neill, OF STL -  finally saw a full season of at bats in 2021 that displayed the potential that the St. Louis Cardinals have been praising about for the last couple of years. I don’t think anyone that was drafting in fantasy leagues in the spring of 2021 expected an offensive season with a slash of .286/.352/.560 with 34 home runs and 80 RBIs. But there is some trepidation here as we enter fantasy drafts where he may go inside the first three rounds. O’Neill has the potential with a 17.9%-barrel rate (8th in MLB) and speed (15 steals) but with 168 strikeouts it makes him more of buy high candidate in drafts.

It is more unusual than most think to be a hitter that can make elite hard contact and can put the bat on the ball at an above average rate. Only six players in MLB entered the 20/40 Club last season and these are hitters that can hit for average with a power ceiling that can be scooped up in the early rounds of drafts

NOT FIVE-CATEGORY BUT KNOCKING AT THE DOOR

There are players that were hurt for portions of 2021 and their final stats show a different story, or they are on the cusp of a breakthrough season or maybe they are a rookie or second year player that is ready for that next big step. Here are a few more players to look at before starting your 2022 drafts:

Byron Buxton, OF MIN -  just needs a full season of at bats and he will answer a lot of questions from the MLB world? He was on his way to MVP consideration before his hip gave out in early May and then broke his hand on a pitch in June. With an “injury prone” tag attached to Buxton his ADP will be much lower than it deserves and fantasy owners that pride themselves as the “gambler” type will jump on the upside of the Buxton. We got a glimpse of the promise that Buxton possesses with a slash line of .306/.358/.647 with 19 home runs, nine steals and 169 wRC+ in just 61 games last year. Looks like a 40/20 multi category star to me.

Wander Franco, SS TB -  will be an everyday player at shortstop in 2022 from opening day. He doesn’t even turn 21 until March but will continue to grow as a major league hitter. This is a player in the mold of Manny Machado that will turn doubles into home runs as he gets bigger and stronger and learns how to drive the ball a bit better. Franco finished the season with a .288 batting average with 53 runs, seven home runs, 39 RBI and two steals over 281 at bats. In his final 164 at bats with the Rays, Franco hit .323 with 37 runs, four bombs and 25 RBI plus went 7-for-19 in the playoffs to give a sneak preview of what is to come in his young career.

Josh Bell, 1B WAS -  is one of those “you love him or hate him” players. Bell put a lot of fantasy owners in a sour spot with a bad first two months of the 2021 season, especially in April where he hit .113 with two home runs. If you weren’t paying attention, he started to bounce back in May but a dreadful start like he had taken quite a while for his average line to re-adjust itself. From June 1st until the end of the season Bell hit 20 homers with an excellent .282/.376/.506 slash line and .881 OPS.

Keep your eyes open throughout your entire draft and locate those players that will contribute across the board especially in three or more offensive categories and you will be setting the foundation to a successful 2022 fantasy season.