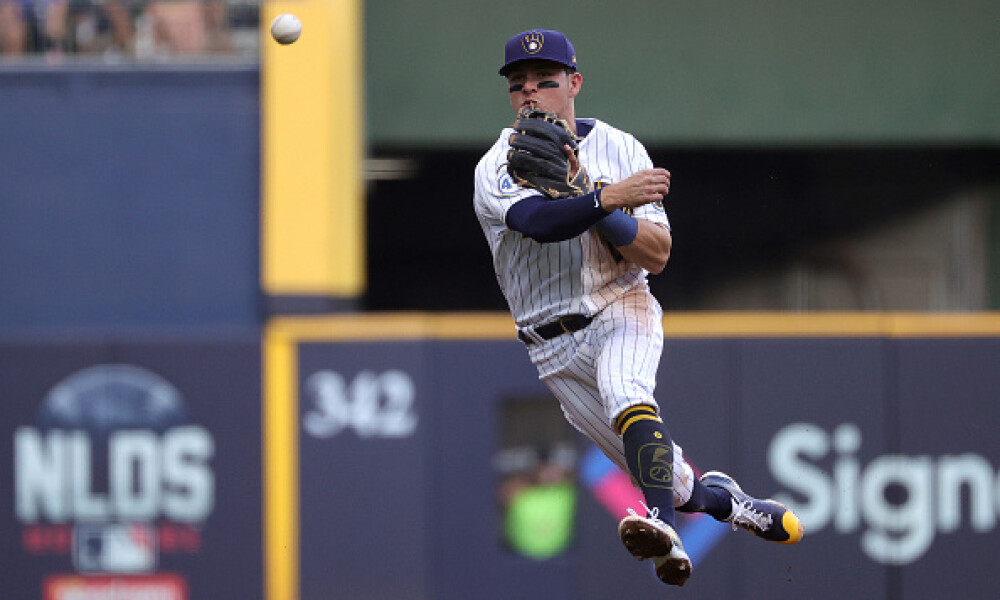 It has been a bit depressing with recent MLB labor issues but one thing that we do know is that baseball will be back- hopefully, sooner than later. One way to make an impact in your fantasy league is to correctly pick one of the breakout players of the season. This can be a player that is moving up a level, a player that wins a starting job or a veteran that finally makes the big splash to elite tag. Let us look at three potential Breakout Third Basemen for 2022…

Luis Urías has already had a roller coaster of a career after coming to Milwaukee as a prospect in November 2019 trade with the Padres. Urias ended up starting the 2020 season on the Covid list and never really got it going. He won the starting shortstop gig in 2021 (forcing out Orlando Arcia) but was mediocre at best hitting .208 through the third week of May forcing the Brewers to acquire Willy Adames from Tampa Bay six weeks into the season.

With Adames taking over as the everyday shortstop Urias finally started to hit after replacing third basemen Travis Shaw who suffered an injury. The Shaw injury was a godsend for Urias as he showed some pop hitting 23 home runs along with 25 doubles and finished the season with a .249/.345/.445 slash with 75 RBIs and a .111 OPS.

With Adames and Kolten Wong in the middle infield positions, Urias fits in well at third base, especially with this newfound power. He is only 24 years and has much more room to grow as a major league hitter, especially as a member of the Brewers everyday lineup.

The Phillies new hitting coach, Kevin Long, has been singing praises of Alec Bohm all spring. Once the Phillies return to play a lot of this season is going to ride on how the left side of the infield performs- Bohm and Didi Gregorius. The Phils need the 2020 version of Bohm back- the one who hit .339 with a .410 BABIP and finished second in the Rookie of the Year race. His slash was .338/.400/.481 over 180 plate appearances and gave the Phillies so much to hope for with a solid late-August and September run.

2021 did not go the way Bohm’s fantasy managers expected as his OPS dropped .243 from .881 to .647, his BABIP dropped too, from .410 to .327 (even though a .327 BABIP is not entirely terrible) but this is a player that had above-average hitting tools and contact skills in the minors with potential plus power. His exit velocity increased in 2021 from 90.2 mph in 2020 to 92.0 mph which placed him 89th percentile league-wide among MLB hitters. With some adjustments, Bohm could be back to his 2020 form making fantasy managers look like geniuses in September.

Carter Kieboom is at a crossroads only 106 games into his major league career. He needs to have a strong spring training and prove he can manage everyday play at third base. His career has been a mixed bag of results so far and let’s be honest- a career .197/.304/.285 slash with little power is nothing to write home about.

We cannot forget that Kieboom is a former first-round pick (2016 First-Year player Draft) and there have been some flashes of offense. He had a solid season in Fresno in 2019 slashing .303/.409/.493 in 109 games with 16 home runs and 79 RBIs, earning a spot in the All-Star Futures Game. During the pandemic shortened 2020 with Anthony Rendon gone via free agency the Nats turned the keys over to Kieboom and got mixed results. He slashed .202/.344/.212 and had his .344 OBP boosted by 17 walks in 33 games. Then 2021 was a disaster from day one as he only hit .133 in the spring and did not make the big club when they broke camp. He was finally called up after the sell-off, but a wrist contusion ended his season a little early in September.

So, here we are at a crossroads already. Looking back, we can find many players that developed slowly and then suddenly broke through. Kieboom could be one of those players and with the Nationals, in full-blown rebuild mode, he should have a long leash at third base as he tries to live up to his top prospect building.

UPDATE: Kieboom is now on the 60-day DL.

Hayes is still the crown jewel of the Pirates lineup. He is the everyday third baseman and will get all the at-bats that he can handle at the top of the lineup.

After a hot September of 2020, Hayes struggled in 2021 batting .257 with six home runs, 38 RBIs, .373 SLG, and a WAR of 1.5. He also developed groundball problems as he hit a career-high 56.7% of balls on the ground. A wrist injury (cyst), though, may have been what led to the disappointing season. If Hays is healthy (the cyst was removed), he is going to hit. He ranked above the 70th percentile in average exit velocity, max exit velocity, and hard-hit rate in 2021, so that shows that he does have the raw power to work with. His swing is geared to put the ball up in the air so adjustments can be made by a player that is still only 25 years old and if some of those changes can be made, we have a breakout player in 2022.