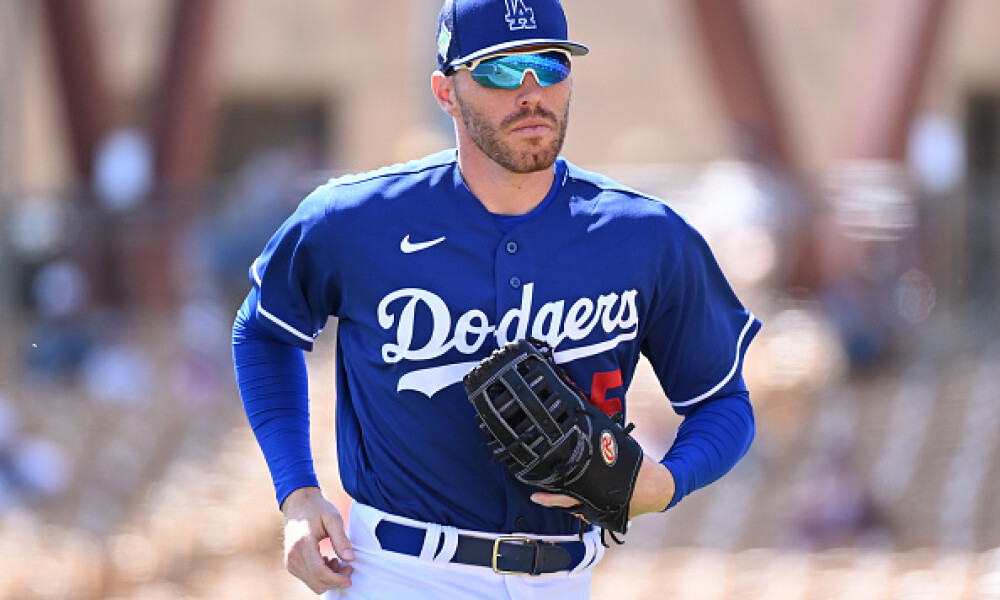 Fantasy baseball managers are in the prediction business. Ultimately, we are trying to build a team that is better than our competitors, which is based on our predictions or projections. It is then our assumption that we drafted the best players and the best team possible.

Some of these predictions are quite obvious while some are bolder than others and, for better or worse, put you out there on an island. Here are some of my predictions for players with first base eligibility for the 2022 MLB and fantasy baseball season. They run the gamut from bold to dull, but that is what we are here for. Some of these predictions in March during Spring Training could look ridiculous a month later, but that is where all the fun is.

Of course, you want to be right, but you also need to stick with your convictions.

I expect a repeat performance from Vladimir Guerrero Jr. this season after he hit .311 with 48 home runs, 111 RBI, and 123 runs last year. It might not be truly going out on a limb, but the addition of Matt Chapman does make Toronto’s lineup better and Guerrero is still setting into his major league career. Though it's not usually used as a fantasy baseball metric or measuring stick, let’s use the .166 wRC+ he posted last season. The fact that he only struck out 15.8% of the time last season helps, and Guerrero’s 15.1% barrel rate and 55.2% hard-hit rate are also huge here.

At this point, the Dodgers’ lineup looks more like something you would see in an All-Star game and not a random game in May. Despite hitting .300 last season and playing 159 games for a team that won the World Series, Freddie Freeman still only drove in 83 runs. He also only has two seasons with more than 100 RBI even with a continued run of success in Atlanta. Expect him to make this season number three with 100+ runs batted in.

Pete Alonso wasn’t truly healthy last season and he still hit 37 home runs in 152 games. In 2019, he hit 53 home runs and I’m expecting a repeat this year. The Mets’ lineup has improved, which will help Alonso see better pitches to hit. Despite not being 100% last season, he still had a 14.8% barrel rate along with a 14.7-degree launch angle. In addition to a 43% fly ball rate, 50 home runs is a very reasonable expectation.

Health is a large part of the equation but, if we put 2020 aside, Rhys Hoskins has essentially played a full season (153 and 160 games) in two of the last three years – which I feel comfortable with. Philadelphia’s lineup has gotten markedly better this off-season with the additions of Kyle Schwarber and Nick Castellanos both set to bat ahead of Hoskins. Not only will he now see better pitches to hit, but he'll also truly be in a key run-producing spot. Thus, I expect him to drive in 100 runs for the first time in his career. After hitting 27 home runs in 107 games last season, 35 homers in 2022 is also a reasonable expectation. It shouldn’t be a surprise that Hoskins is one of my most targeted players.

The big thing for Alex Kirilloff here is his health, as he entered spring training without any restrictions from last year’s wrist injury. Being projected to bat eighth in Minnesota’s lineup this season does make things a little harder to be optimistic about regarding Kirilloff. If he hits, though, I can see him moving up in the order. With just a 7% launch angle last season, I’m not sure we’ll get much more than 20 to 25 home runs. however, Kirilloff could get to 80 RBI along with a .275 batting average if he remains healthy. This is on the high side of projections for Kirilloff, and it might even put me as the highest, but the talent is there.

It’s no secret that I’m high on Bobby Dalbec. He has ended up on a lot of my teams this year in the search for power after waiting on first base and corner infield. Expecting Dalbec to continue his pace from the second half last season (15 home runs in 58 games) is a little much, but 35 home runs is a reasonable prediction. When Dalbec goes to the plate, it’s clear that he is looking to punish the baseball as evidenced by his 17.3-degree launch angle and 20.2% barrel rate.

In 56 games in the abbreviated 2020 season, Luke Voit hit 22 home runs and showed that he can be prolific in the power department. Health was the issue for Voit last year, as he only made it through 68 games in what was a season he would like to forget. Voit now gets a fresh start in San Diego as the regular DH, which should help to keep him healthy. I’m not sure that he can truly repeat his .333 ISO from 2020, but his power is real. All of Voit’s Statcast metrics point to his continued success – most notably a 15.8% barrel rate and 51.8% hard-hit rate. Look for 30 to 35 home runs here. If you want to get really bold, let’s go for 40 bombs.

It's possible that you strongly disagree with some of the opinions expressed above, but now let’s take things up a notch. Every year there are things that transpire over the six months of a baseball season that we never saw coming in March. Let's try to pinpoint some!

In 2019, Rowdy Tellez hit 21 home runs in 111 games with Toronto. Now he's not only slated to be Milwaukee's starting first baseman, but he also stands to benefit from the DH added to the NL. The biggest variable here is playing time and if Tellez does in fact appear in 140 to 145 games, let’s go for 30 home runs here after he had an 11.4-degree launch angle and 11.6% barrel rate last year.

If you feel like Jesús Aguilar gets forgotten about, you aren’t wrong. In 311 NFBC drafts from February 1st through March 19th, he was the 30th first baseman off the board with an ADP of 289. Last season, though, Aguilar did hit 22 home runs to go along with 93 RBI in 131 games. Miami has improved this year as the additions of Avisaíl García and Jorge Soler will give Aguilar more help and protection in the batting order. With that being said, is 30 home runs and 100 RBI really that crazy of a prediction for him this season?

You will get power here, but at what cost? In 74 games last season, Bobby Bradley hit 16 home runs in 74 games – but he also struck out 35.5% of the time while batting just .208. It’s hard to expect much movement in that department, but Bradley should get his fair share of playing time this season without many other options in Cleveland. That means we could be looking at 30 to 35 home runs out of Bradley in 2022 as his 16.8% barrel rate certainly works in his favor.