The Closer Report: Axford Gets the Axe & Other Stories 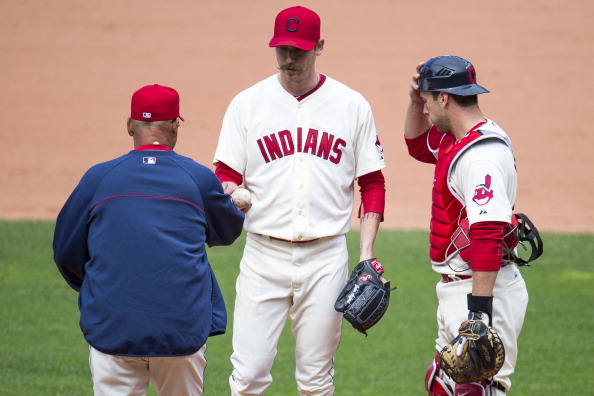 Previously on The Closer Report…

Things were settling down in Closer City as our heroes were patrolling the Ninth Inning District with authority. Batters were on the run, saves were being accumulated and each closer was doing an admirable job of not only holding down the fort, but keeping the ever-grumpy Manager satisfied to the point of silence. But that was yesterday and yesterday was just an illusion. It was the calm before the storm, if you will, as we’ll see in this week’s episode – Closer City is still very much in turmoil.

While that smell you’re catching right now is usually just Cleveland itself, it is the stench of disgust emitting from the Indians bullpen. After four outings in which John Axford allowed five runs on six hits and six walks over a total of three innings, Terry Francona had to make a move. He announced that Axford would be removed from the closer’s role and be put in low-leverage relief situations for the time being. Rather than name a replacement, Francona said that he would employ a committee approach that consisted of Bryan Shaw, Cody Allen, Marc Rzepczynski and possibly even Steve Atchison.

Does this sound familiar? It should. It’s actually the identical situation as we saw in Oakland just a few weeks ago when Bob Melvin pulled Jim Johnson from the role and implemented the dreaded committee. Hopefully, those of you who own Axford saw the similarity and didn’t drop him yet as similarly to what we saw with the A’s, Francona wants to be able to give him the job back. Axford is a closer, plain and simple. Sometimes he needs a kick in the ass to get him back on track, but he’s a closer and Francona knows that. By not naming a successor, Francona has, just as Melvin did, left the door open for Axford to re-take the job. It might take a couple of weeks, maybe a month, but Axford will be closing again for the Tribe before we hit the All Star break.

But what do fantasy owners do now? Well, trying to pick which member of the committee is usually a nightmare. Murphy’s Law says that you pick up one guy and the other one gets the next save, right? It’s a total pain. But Cleveland’s may not be so bad actually. While many have expected Allen to be the heir apparent, the reason Francona opted for a committee (aside from wanting to get Axford back in) is because he knows that Shaw just might be the better play.

Allen definitely throws harder and has the better strikeout rate, but as we’ve often seen in a number of cases, some managers actually prefer to use their best guy in a seventh or eighth inning role as a way to prevent or even thwart an existing comeback by the other team. Francona can bring Allen in with men on base and have much more confidence in his pitcher notching a few strikeouts to close out an inning, rather than say Shaw, who uses a little more guile and finesse, but is predominantly a ground ball pitcher. Obviously the situation will dictate a lot of what Francona does, but so far, it looks like Shaw may have the edge.

Seriously, what the hell is going on with the Angels bullpen? Joe Smith fell ill and was found puking in the bullpen last week, so Ernesto Frieri was left in charge of the ninth once again. He notched a save against the Yankees in Smith’s absence and the following day, while Smith was still recovering yet feeling tightness in his side so Frieri got the opportunity again. This time he failed. Still, while Smith was said to be feeling better, manager Mike Scioscia opted to pitch him in the eighth inning the next time out and gave Frieri another chance, one in which he was again successful. Suddenly everyone was jumping all over Frieri again. Those who dropped him were lamenting the quick trigger while those grabbing him off the waiver wire were celebrating their newfound ninth-inning treasure.

But hold on there, Skippy. Pump the brakes. Because while Frieri owners were dancing around Saturday it was Smith who got the save chance. He may have been a bit shaky, but he still closed out the game.

So who is it – Frieri or Smith?

Well, it just might be both for right now. Ultimately, I believe the job will default back to Frieri, but until our boy Ernesto can string together a few scoreless appearances, preferably a few without a bunch of hits and walks allowed, the two are likely to share in the job. Given the fact that it’s Scioscia and every fantasy owner knows his whacked-out way of doing things, it’s difficult to say whether it will be an even split moving forward, but neither can be dropped and neither should be fully trusted. It may take a few weeks, but hopefully, this gets sorted out soon enough.

This bullpen could very well be the ugliest out there now that Chad Qualls seems to have stepped up a bit more in Houston. While Kyle Farnsworth remains the closer for the time being, Mets manager terry Collins turned around this weekend to reveal that Jeurys Familia is “moving closer to being the team’s closer.” Are you serious? I mean, I know that Farnsworth is a mess in the making, Jose Valverde is awful and Daisuke Matsuzaka can’t be trusted, but Familia? I’m not so sure here. If he can lower that 11-percent walk rate, maintain the ground balls and maybe pitch to a little less contact, I’d be okay with recommending him. Unfortunately though, even if he were to be named the closer, there’s very little evidence to suggest that he won’t be replaced by someone else within a week’s time. Sigh. If only Vic Black could stop walking guys down in the minors…

Return of the Fallen

Make sure those lineups are properly adjusted this week as both Aroldis Chapman and Casey Janssen will be closing out games for their respective teams. Obviously Chapman is a no-brainer (we watched him strike out the side Sunday), but don’t worry about the other guys in the bullpen in Toronto. Maybe Janssen doesn’t pitch three days in a row, but there’s no way Brett Cecil, Steve Delabar or Aaron Loup is going to usurp Janssen from the Jays’ closer role.

Now let’s take a look at the updated Closer Grid…

*currently on the DL but will return shortly