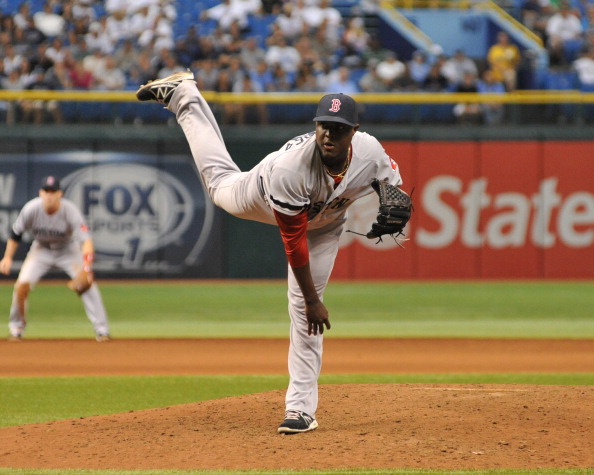 All-Star Week is always a difficult time to write about pitching, as there are no two-start pitchers due to the shortened week of games. It is also tough to come up with a good slate of streaming options, as rotations are being shuffled with  the days off, and most of the starting pitching projections have a bunch of "TBA" designations where we usually see actual MLB pitchers' names.

I will flesh these details out as more information becomes available, but as of this afternoon (Sunday), here are your streaming options. All the below pitchers are owned in less than 50% of leagues, so you should have a chance to snag them if you need a pitcher to round out Week 16.

We don't know who he'll be facing, but Jackson pitching in Arizona is not a stellar match up. He is also coming off a couple of bad starts during which he yielded 13 earned runs in 9.2 IP, with an ugly 9:6 K/BB ratio. Although at present he is the only streaming option for Friday, I urge you to avoid deploying him on the road.

Gibson is coming off a six inning appearance at Seattle where he did not allow an earned run, and only one walk. Of course, he only recorded three strikeouts, and you have to be wary of his two recent two inning debacles, but facing the Rays is not a daunting task, especially at home.

Phelps is walking a too many batters for me to feel truly comfortable about starting him on a regular basis, but he does provide adequate strikeouts for a back of the rotation starter, and has only had one bad outing in his past six starts. He also pitches much better at home, and with Cincy missing both Joey Votto and Brandon Phillips, I like this match up.

De La Rosa was recalled this week to fill out the BoSox rotation, and based on his earlier five start run, he is a good choice to stream, if not to roster pending another demotion. He has struck out 33 in 37.1 IP this season, with only eight walks charged to him over that period. He has posted a 2.89 ERA and 1.04 WHIP on the season as well. Consider him the ace of the streaming options in Week 16.

If Lewis hadn't been destroyed by the Angels in his last start, I might be willing to use him as a spot starter, but the 11 earned runs over 2.1 innings makes me run away from him. He had started to come around, throwing two consecutive QS before the last outing, compiling excellent strikeout numbers and showing superb control by not handing out any free passes. In fact, the only high point of his appearance against the Angels was his continued stinginess with walks. Unless you are desperate for a pitching performance, avoid Lewis here on the road at Toronto, a team he has had major issues with in the past.

The best thing I can think to write about Wood is that he is a better option this week than his teammate, Edwin Jackson. Wood has tossed just 15.2 innings over his past three starts, where he has given up nine earned runs, dividing them evenly, three per outing. He also handed out 11 walks, with 12 strikeouts in those three starts. Is there anything to recommend him? Watch what he does on Sunday prior to the break when he goes against Atlanta and Julio Teheran, and if he fares well, then you might want to consider using him on Saturday.

McCarthy did not look very sharp in his first start for the Yankees, holding the Indians to one earned run but allowing four runs overall. He did only hand out one walk, but the nine hits are a bad sign. I do like the match up as noted above in the discussion about David Phelps, so I would be willing to give him an opportunity to do something worthwhile here.

Kendrick is a back of the rotation starter that should be avoided for the most part. He can occasionally give you decent strikeouts, and facing the Braves leads to the hope for something good on that aspect of his game. Generally, he doesn't have control issues, but he also does not miss many bats, thus his 4.46/1.37 ERA and WHIP combination on the season. If he can pitch deep enough into the game in Atlanta, then you may be rewarded with some Ks, but that is about the best you can hope for if you use him on Sunday.

Smyly is a mystery to me. He has the skills to shut down opponents, but not apparently over 6 or 7 innings. He generally has good to great control, but lacks a decent strikeout touch. He also has been showing a disturbing tendency to yield more hits per appearance, leading to an inflated set of peripherals, especially his WHIP which currently sits at 1.37. He career stats against the Indians do not scream "Must Use," either, although he does have some strikeout success versus Cleveland, so there is that.

Tepesch has the ability to shut down an opponent, but that happens too infrequently to truly trust him. His dominance, control and command are too inconsistent to use him unconditionally as a member of your rotation, but in the appropriate situation, he can pitch a gem for you. The issue here is that he has been better at home than on the road, and in very limited action in Toronto (one game in 2013), he pitched poorly. Still, small sample size, so maybe if you are desperate and cannot grab (or force yourself to use) Kendrick or Smyly, then Tepesch is your guy. Heaven save you.

Correia just keeps dealing lately, with six of his last seven starts being of the QS nature. He has a terrible K/BB ratio of 13:12 over those seven games, to be clear, but he has also been yielding less than a hit per inning, a very favorable trend for a SP. Pitching at home has not been a huge advantage for his this season, and he doesn't exactly own the Rays, but he has as much potential as the three pitchers I originally highlighted for Sunday.

Danks has been hit pretty hard in three appearances against the Astros, but he does like to pitch at "The Cell." His last outing was a one run no-decision in Cleveland where he struck out four and walked two, as well as giving up seven hits in seven innings. As he tends to keep the White Sox in the game, he is a pretty good option here, even given his recent issues against Houston.

I almost always like Padre SPs when they are throwing at home, so there is already a point in favor of starting Despaigne. With four QS out of four starts on the season, there is more to like, especially coming off a start against the Dodgers where he didn't yield a single walk, and he racked up seven strikeouts. Despaigne has experience from his time in Cuba, so it isn't the usual case where I would caution against a rookie being due for a regression. He has a 1.35 ERA and 0.97 WHIP on the year, and really should not be owned in less than 40% of leagues. Go out and grab him off the wire now.

The contusion Hand suffered in his last outing, which caused him to leave the game after four innings is healed enough for him to be penciled in for Sunday's start. In his three most recent starts, he has a 3.52 ERA but an ugly 1.70 WHIP to give his peripherals a nice Jekyll and Hyde demeanor. If he can keep the ball on the ground and in the park, and show better control, he could be usable, if you are desperate for innings.

Let's hope we see some better options as the teams set their rotations this short week. If not, then you might be best served just to avoid using any of the above starting pitchers , except for De La Rosa.

There are still too many TBA pitching opponents listed for this short period, but we did pick up some other decent streaming options, notably Gibson, McCarthy, Correia and Despaigne. With regard to Despaigne, do me proud and pick him up so he is no longer a candidate for this weekly posting, just as you did for Chris Young recently.