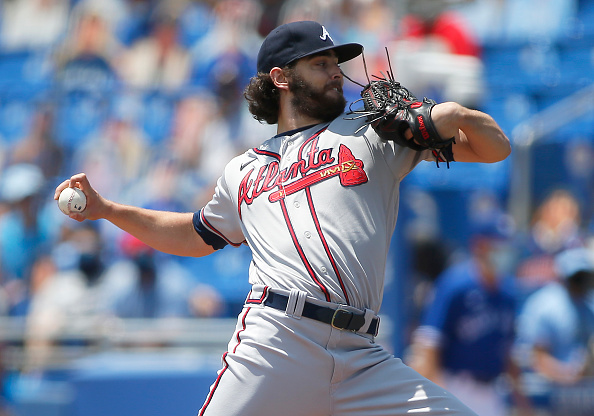 It’s a split slate tonight with the main slate being a seven-game slate starting at 7 pm ET with no real weather issues either. Let’s take a look some of the best value plays on the main slate.

Ian Anderson , RHP ATL - In the last couple of weeks the Phillies’ offense hasn’t been good against RHP with a 27.5-percent K-rate and a .288 wOBA and 76 wRC+. Anderson has been good of late, prior to his last start, as he went 13.2 shutout innings with five hits and 12 Ks against the Cubs and Yankees. Mid tier on both sites is a nice price for a pitcher of Anderson’s caliber.

Justin Upton , OF LAA - Upton is a guy who can be hit and miss of the course of a season but in this match-up it’s a solid spot with him having hit Kershaw solidly before with a homer and against LHP this year, Upton is hitting .320 with a .489 wOBA with three homers. Kershaw is coming off his shortest outing of his career as well and the Dodgers bullpen hasn’t exactly been lock down either.

Nick Ahmed , SS ARI - Ahmed is 7-for-16 with two homers and five RBI career off of Joey Lucchesi . Lucchesi has also been hittable by RHHs this year as well allowing .437 wOBA and over a 1.000 OPS to them. It’s been a slowish start for Ahmed this year but at this price if he simply hits Lucchesi like he has in the past he won’t have trouble hitting value.

Nate Lowe , 1B TEX - Lowe might be a bit more than other hitters that are typically in this piece, but there is value here as the 12th and 13th most expensive first baseman on FD and DK respectively. He’s been mashing right-handed pitchers this year with six homers and 19 RBI in 67 at-bats. Ljay Newsome has been only pitching a small period of time but has still been hit hard by left-handed hitters making this a very tasty match-up for Lowe.

Andrew Benintendi , OF KC - Benintendi is 7-for-19 in previous meetings with Lance Lynn , who while being good so far this year is making his first start back from the IL. Benintendi is also hitting .306 with a .378 wOBA off of RHPs so far for a Royals’ lineup that has been pretty good at stringing together hits and scoring runs.

Taylor Trammell , OF SEA - Kohei Arihara has been like a batting practice pitcher to this point in the year to both handedness of hitter. Trammell has the second-most homers off of RHPs on the year for the Mariners with a solid .310 wOBA. While Arihara has been easier on RHHs, Trammell’s cheap price and solid numbers against RHPs make him playable though you could also look at Kyle Seager and Mitch Haniger for costly prices.

Austin Riley , 3B ATL - Riley has been on a tear recently hitting .325 in the last 10 games and against RHPs this year he’s posted a .371 wOBA with three homers. For as much acclaim that Acuna gets, and should, Riley actually has the highest batting average on the team against right-handed pitchers. Velasquez has been lit up by RHHs this year with a .477 wOBA allowed. The price is far too low on FD for Riley today.

Yuli Gurriel , 1B HOU - Gurriel has been rolling against southpaws this year with a .419 wOBA and three homers and 13 RBI which are all at least second-best on the team against lefties. Steven Matz for his part has been hittable this year and is allowing a .345 wOBA and nearly .800 OPS against RHHs. He should be hitting in the middle of a still potent offense which is nice at this price.

Francisco Lindor , SS NYM - Lindor is starting to turn things around and even when he’s not been hitting he’s been making it on base consistently to start the season. While the numbers aren’t great in either average or wOBA even against RHPs, he is facing Merrill Kelly who has been lit up like a light bulb this year in ERA and BAA and wOBA by either side of the plate so Lindor being a switch-hitter gives him either advantage he wants. Get the value here before the price starts to rise again.