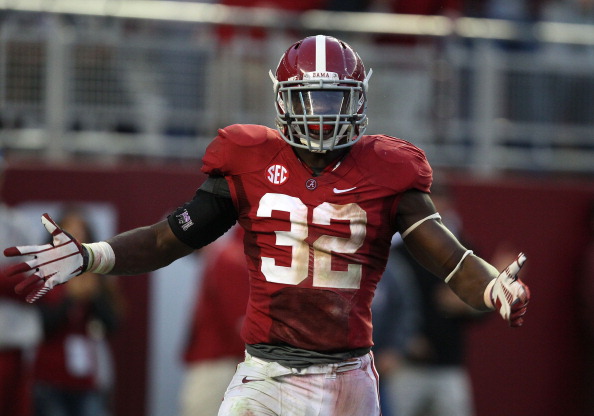 Training camps have opened and while we wait to see how things shake out in terms of IDP usage, I thought it would be a good idea for us to become acquainted with the rookies poised to make a splash in 2014. This week, we will take a look at six linebackers that are poised to make a difference this season.

Perhaps we remember that the stud linebacker the Ravens drafted last season to replace Ray Lewis, namely Arthur Brown, turned out to be a major bust. There is again the potential that the Ravens will be disappointed in their top defensive draft choice, as Mosley has had trouble staying healthy while he was roaming the field for Alabama, having suffered through hip and elbow dislocations, a torn labrum in his right shoulder, not to mention some concerns that arose about his knee during his Pro Day this spring. That being noted, all the MRI tests came back negative, and the Ravens were apparently satisfied with his condition. Assuming he can stay on the field, he projects as a three down LB, Remember that he was a defensive captain for the Crimson Tide, and led the team in tackles during his final two years in Alabama. He is a complete player who will rack up the tackles, while also being well suited to provide pass coverage, too. He would be a fine LB2 to target, assuming he can beat out the aforementioned Brown to win the starting role opposite Daryl Smith.

Rookies do not generally start the season opener for the Steeler's Defensive Coordinator Dick LeBeau but Shazier has a shot to do so, having taken first team reps during the Pittsburgh OTAs. He led the Big Ten in tackles in 2013 while playing for the Buckeyes, and demonstrates a superb set of skills, as he can both rush the QB and cover receivers effectively. He also is a strong run support linebacker, as evidenced by his tackle numbers in college. Described as speedy and athletic, he also has exceptional reactions to the ball. If he breaks the trend and is a starter to open the season, he is another LB2 to target, and should rank as a top 20 linebacker with a potential to be much more as he adjusts to the pro game.

The number one pick by the Texans, Clowney steps into a great situation, playing opposite J.J. Watt on the Houston defensive line. This will help insure him some freedom to pursue the QB, as he did in South Carolina where he racked up 24 sacks over three years. His status as an outside linebacker will cut into his tackle production, but at 6'6" and 266 pounds, he will pose a problem to QBs trying to throw over or around him and his outstretched arms. He is fast, powerful and extraordinarily athletic. He will have a learning curve to overcome as he develops his pass rush skills against NFL linesmen, but then again, he could be one of the top ten defensive players as early as this season.

The Raiders drafted Mack with the fifth overall pick, taking the former Buffalo standout for his pass rushing skills. While playing in the MAC, he put up 10.5 sacks, three interceptions, and two touchdowns, together with 19 tackles for a loss as a senior. He has some very good teammates that will form a formidable front seven, namely Justin Tuck, LaMarr Woodley, and Sio Moore. He will be an immediate three down starter for Oakland, and despite playing on the outside, he should rack up plenty of tackles as well as double digit sacks, if all goes well.

Smith will need to beat out Geno Hayes to realize his potential and grab a full time starting LB job, but the speedy rookie has the pedigree to pull that off. He fell to the fifth round, after testing positive at the Combine, when he was originally projected as a third round pick. By falling, he becomes an excellent value pick for the Jaguars, and will not be highly ranked by most fantasy players, at least until he shows his mettle in camp and the preseason. If all works out for him, he could rack up more tackles than any other rookie LB, but even falling short of that, he will be an excellent late pick as a LB3.

Kirksey should become an everydown starter from Game One, assuming he can beat out Craig Robertson. At 6'2" and 233 pounds, he is slightly undersized for his position, although his speed will assist him, especially in coverage situations. He is not much of a blitz threat, being more of a run and chase player. Keep an eye on the news coming out of the Browns' training camp to see just how much playing time the rookie will receive to start the season. Even if he isn't able to wrest the starting position away from Robertson, he will see time as a starter sometime during the season, perhaps after the bye week when the defensive coaching staff realizes that who they have starting isn't cutting the nut.

Next week, we look at defensive linesmen. If you have a player you want me to discuss, drop me a line.