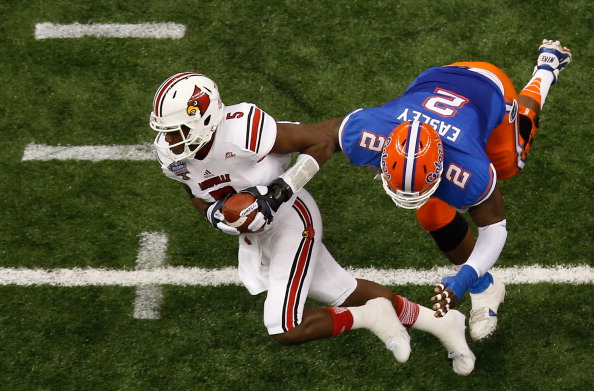 Stepping into a starting defensive line job requires a quick study and most rookies are used as situational replacements their first year in the league, at least until they demonstrate an understanding of the pro game. Thus, drafting one of the following players in your IDP league should only be done late in the draft, preferably after you have selected your starting DLs. Of course, there are exceptions…

The Rams made Donald the 13th overall pick in this year's draft, and he will add to what is shaping up as the best D-line in the NFL. He will play inside, flanked by the two of the best outside DEs in the game (Robert Quinn and Chris Long), and should help those players pick up some additional sacks as he forces QBs to leave the middle and head to the edge. Initially, I see him being used as a situational pass rushing interior linesman, but depending on his learning curve in the NFL game, he could play a significant role as the season progresses. He is not only a pass rushing threat, but also a solid run stopper, too. If you are interested in accolades for your players, with him on your team you could end up with the 2014 Defensive Rookie of the Year.

Currently, Easley is on the Non-Football Injury (NFI) list, recovering from an ACL tear that occurred last October. (He tore his other ACL in 2011, so he has completed the set.) Word out of camp is that he will be ready to roll by Game 1, but that still remains to be seen. He was taken by the Patriots at the end of the first round, because he is considered to be slightly undersized at 288 pounds, although his height is good at 6'2". He has a lightning fast first step, which he follows up with a quick second and third step, allowing him to penetrate the pocket and get to the QB. He has the advantage of lining up next to a very good young DE in Chandler Jones, so offenses will have to decide who to target for a double team effort and this will let him get loose on occasion to wreak havoc in the backfield.

Kony doesn't project as a starter, having both Greg Hardy and Charles Johnson in front of him on the depth chart. What his role will be, at least initially, is a rotational replacement for the veterans, but Johnson is not a paragon of health and stability, and Hardy was franchise tagged and may be on his way out of town after this season. The 6'4" 273 pound second round pick is raw in terms of NFL ability, and will spend 2014 learning how to adjust to the pro game, primarily being used on third down as a pass rushing specialist. In dynasty leagues, he is one to target for future brilliance, but 2015 is when he will make his mark first, not this season.

The 6'3", 273 pound will play behind the established starters, Everson Griffen and Brian Robison, but does figure to see significant time as his new Head Coach Mike Zimmer likes to use a liberal rotation with his defensive ends, but don't get carried away and expect him to get anything more than 500 snaps in his first season, absent injury to one of the other DEs. He can rush the passer, but is no slouch against the run, either. He is a year two or three dynasty pick, unless your league forces you to play more than two DLs every week.

The bad news for Lawrence is that he broke his foot on July 29th and will miss eight to ten weeks of action. That is unfortunate for the Cowboys, as they were banking on him starting from the git-go, having surrendered both their 2nd and 3rd round picks to move up in the draft to select him. He stands at 6'3" and weighs in at 251 pounds, so he has an intriguing mix of size and speed that with some technique development will allow him to become an every down lineman that should rack up sacks in impressive numbers.

Come back next week, when I profile the top rookie defensive backs.