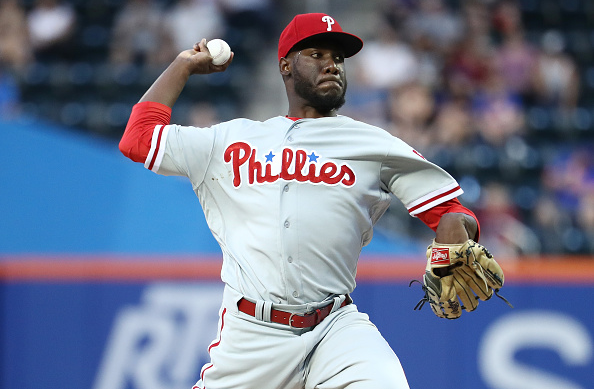 This Sunday is the unofficial start of the All-Star break, though it won't be major leaguers that take the field in D.C. The future stars of the big leagues will be on the field at Nationals Park trying to show off their skills to their eventual comrades and competitors.

If you are unfamiliar with how the game works, the two teams, the World and U.S.A, are made up of some the top prospects from each MLB team and some who the teams just want to show off a bit. There are 50 total prospects in the game between the two teams, 30 of whom are among the top-100 in baseball with the U.S. team leading the tally with 19 top-100 players on their side.

There are clearly well known guys in this game and several that I have broken down before so in this piece I won’t focus on those guys. I will instead give you info on the players you may not know much about but find themselves representing their organization in this exhibition. Just as a point of reference for how quickly guys can make the bigs after the Futures Game, 15 of the 50 players from last year’s game are already in the majors, and that doesn’t include guys who have suffered injuries like Brent Honeywell , Vlad Guerrero Jr., Nick Senzel, and Victor Robles .

Bryan Mata (RHP BOS) - Mata is one of the youngest members on either team at just 19 years of age. The young righty was signed out of Venezuela in January of 2016 as a member of the 2015 international signing class. Since becoming a pro in the Boston system, he has advanced through their system quite rapidly making it to High-A this year. He features a three-pitch mix of a low-to-mid-90s fastball with a lot of late life, a good and still developing changeup that utilizes good arm action and deceptive fade to miss bats, and a mid-70s curve that can be thrown for strikes but needs more power. Mata has only thrown a tops of 77 innings in a season since turning pro, so he still has a lot of innings to add on before we see how he does over the long haul of a full campaign. However, there are already starting to be cracks in his armor with a skyrocketing walk rate this season. In 15 starts, 66 innings, the righty has 56 strikeouts and 55 walks. That’s not good to say the least. In previous years he’s posted 9.0 and 8.65 K/9 rates in 61 and 77 innings respectively with BB/9 of 2.08 and 3.4 in those same years, but this year Mata has a 7.64 K/9 and 7.5 BB/9 mark. Mata will need to harness the control to move forward despite his 5-2 record and 3.14 ERA.

Miguel Amaya (C/1B CHC) - Here we go again with a Cubs prospect that is multi-positional.

Though to be fair most of his starts in the minors have come behind the plate and only sparingly at first base. Like Mata, he is also just 19 years old, though six months older, and he was part of the same international class, getting a $1 million deal from Chicago. Known to be a big-time defensive prospect, Amaya has made that his calling card thus far while his bat improves at each level, up to A-ball at the moment. At 6’1” and 185 lbs. he has the type of frame that could keep him behind the plate for a while, and if he keeps throwing out base runners like he did in rookie ball (41%) his defense will keep him there too. The bat is another story though as he has struggled swinging the lumber until this season. Amaya played 58 games in each of the past two seasons at rookie ball and Low-A hitting a combined .236/.305/.328 with four homers, 50 runs, 48 RBI, and 10 steals. In 2018 however his bat has taken a giant leap forward, slashing .281/.350/.474 in 77 games (285 AB) with 11 HR, 42 RBI, 37 runs, but no steals. The Cubs expect him to be able to hit for average and provide 12-15 home run pop in the majors and be a defensive asset behind the dish, which would make him a solid fantasy catcher as a starter. 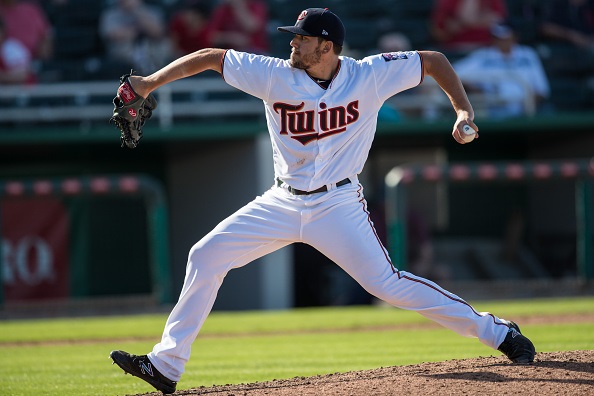 Lewis Thorpe (LHP MIN) - Thorpe was signed in 2012 out of Australia but has only made it to Double-A in the Twins system despite also being 22, nearly 23, years old. Why has it taken him six years to make it to Chattanooga? Injuries and illness. In late 2014 he had an elbow issue that required Tommy John in the spring of 2015 and cost him the entirety of that season, then while rehabbing and trying to make it back in 2016, he contracted mono and lost the full year again. When he returned to the bump in 2017, the four-pitch mix he utilizes was good enough to get him through 77 innings (15 starts 16 appearances) at High-A and six innings (one start) at Double-A while posting a combined 2.92 ERA, 1.20 WHIP, .221 BAA, and a 9.86 K/9. Thorpe uses a low 90s fastball with good command to set up his sinking changeup that’s deceptive, and his tight slider and pure up-down curveball all of which miss bats and stay in or near the strike zone well. In 2018 the southpaw has spent the whole year at Double-A Chattanooga while posting a 4.03 ERA (3.54 FIP) with 104 Ks in 82.2 innings and a 1.40 WHIP with a 2.61 BB/9. Getting innings on the hill is the biggest thing for Thorpe so he can reach his potential of a very good number three starter for the Twins.

Luis Alexander Basabe (OF CWS) - The Red Sox signed him and his twin brother, Luis Alejandro, in the 2012 signing period out of Venezuela and then wound up trading both of them four years later. Luis Alexander wound up on the south side of Chicago as part of the return for Chris Sale . Since that trade, Basabe has made it up to Double-A Birmingham for the Pale Hose this season, playing 19 games so far, after starting the year at High-A Winston-Salem. At 21 years old and with a 6’0” 160 lbs frame there is still a bit of projection left in his game, and a projection that the White Sox hope nets them a future high quality outfielder. In 2018 he is slashing a combined .252/.351/.442 with nine home runs, 50 runs, 34 RBI, and 11 steals in 76 games between two levels, though all nine homers came at High-A and he has only two triples and no other XBH at Double-A so far. Last year was his first in the White Sox system and in 107 games at Winston-Salem he put up a .221/.320/.320 slash line with five homers, 52 runs, 36 RBI, and 17 steals. So clearly he is more of a speed than power guy at the moment but most, including me, believe he has the bat speed and talent to be a 20-20 guy in the future, though his pitch recognition and strike zone knowledge have to improve. Basabe does have the outfield ability to play center but also has the arm to play right.

Seuly Matais (OF KC) - There isn’t a lot going right for the Royals this season as they are clearly in a rebuilding mode across the board, but one nice spot has been the emergence of Matais’ bat. If you haven’t heard of him, despite being the leader in home runs across all of the minor leagues, that’s not a shock as he is outside the top-100 and is part of a farm system near the bottom in overall ranking. That being said, Matais could be a future stud in the outfield at Kauffman Stadium. Standing 6’3” and 200 pounds, the 19-year-old native Dominican has a slightly below average hit tool but above average power, run, arm, and field tools that have gotten him comps to Yoenis Céspedes . His batting lines stayed relatively consistent at rookie ball, two years in a row, slashing .250/.348/.477 one year and .243/.297/.423 the next with nearly identical counting stats totaling 15 homers, 65 RBI, 59 runs, and four steals in 103 games. In 2018 however, his power has come alive with 26 home runs in 72 games at Class-A Lexington with 50 runs, 46 RBI, five steals and a .215/.296/.562 triple slash. A major issue for Matias is his K-rate which has been 36.9, 29.3, and 37.1 each of the last three years respectively while only managing single-digit walk rates. If he learns to be more patient and control the strike zone waiting for his pitch, his full potential could be unleashed in the next year or so. 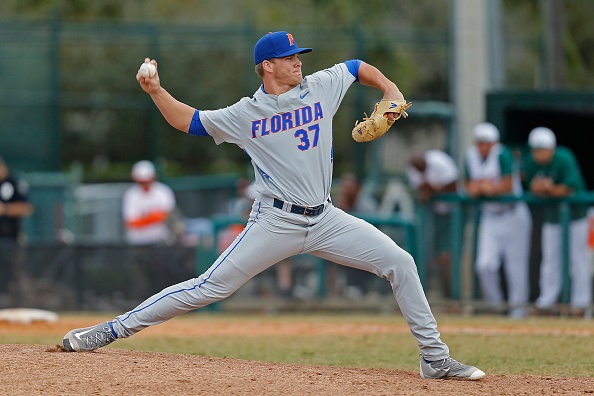 Shaun Anderson (RHP SF) - Tyler Beede , and now Dereck Rodriguez , have gotten all the pub amongst the young Giant arms in their system, but Anderson has a shot to finish the year better than either of them. The righty was drafted in the third round of the 2016 draft out of Florida by the Red Sox who planned to make him a starter, despite him only starting one game in three years as a Gator. That transition really took shape in 2017, in which he started with the Red Sox but finished with the Giants after being dealt in the Eduardo Núñez trade, where in 121.2 innings  across two levels and three affiliates he posted a combined 3.44 ERA, 1.09 WHIP, .219 BAA, 7.83 K/9, and 2.41 BB/9 over 23 starts (24 appearances). Not too shabby for a guy that hadn’t started in college due to the depth of the Florida staff with five first round starters. In 2018, over 94 innings in 16 starts, he’s posted a 3.45 ERA, 1.22 WHIP, 8.9 K/9, 2.11 BB/9, and .253 BAA at Double-A Richmond (the Flying Squirrels is one of the best mascots in all of sports). Anderson’s 6’4” 225-pound frame should allow for durability as well as keeping his 93-96 mph velocity on the sinking fastball up throughout starts as well as give him angles to throw his mid-80s nasty slider and sinking, fading, changeup. The three-pitch mix along with the occasional curveball tossed in give him the upside of a number two or three starter starting in a year or two.

Enyel De Los Santos (RHP PHI) - Philadelphia is already the 22-year-old’s third organization after signing with the Mariners in 2014, he was dealt to the Padres in the Joaquín Benoit deal in late 2015 and then spent two years in the San Diego system before being the return piece in the Freddy Galvis deal over this past winter. At 6’3” and 170 lbs. he is of good enough size to be a member of a big league rotation, though adding more weight to his frame probably wouldn’t hurt. In his first season with his newest organization, De Los Santos has put up some impressive numbers over his 95.1 innings at Triple-A Lehigh Valley with a 9-3 record, 1.89 ERA, 1.26 WHIP, .217 BAA, and an 8.21 K/9 rate. Using a 94-95 mph fastball with nice life that touches 97-98 and misses bats, or produces weak ground balls, a plus changeup that fades and uses deceptive arm speed, and a still developing average curveball allows De Los Santos to be very effective on the mound and his control of all three give him a solid career BB-rate of less than 3.0 BB/9. As of this writing, the Phillies used him as a spot starter against the Mets on Tuesday night, before sending him back down to Triple-A but he did do well against them getting a quality start and a win with six strikeouts in 6.1 innings. He was set to start the Triple-A All-Star Game but was called up instead and will now pitch in the Futures Game on Sunday.