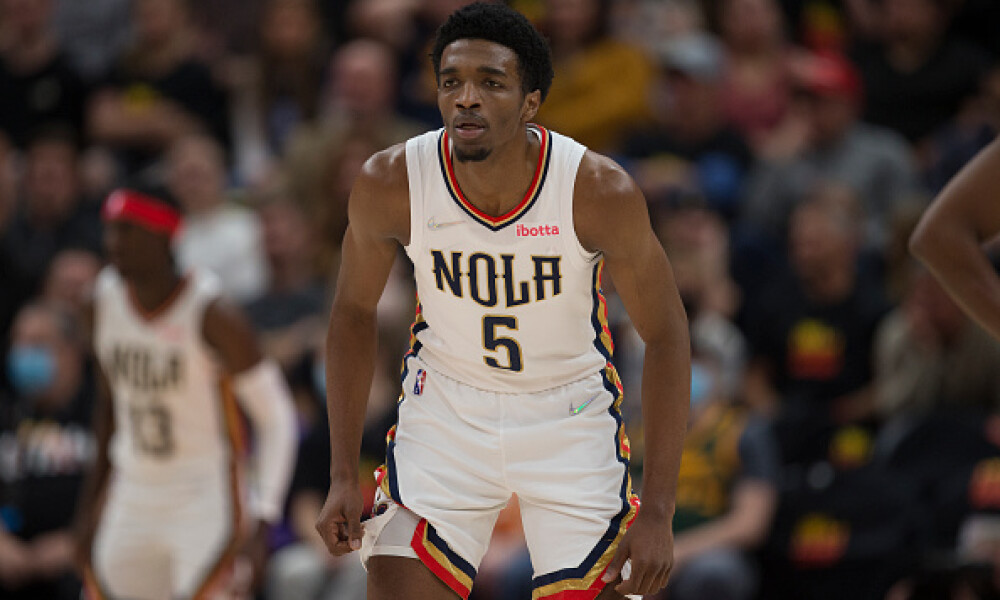 The COVID battle of the winter of 2021-2022 continues and the only thing we can do is continuously look down NBA depth charts. In fantasy basketball leagues where waivers are more of a free-for-all, you’ll have to act fast in order to stay ahead of the game. Memphis has five games this week and if anyone else goes down early in the week, there will be a lot of value to be had on the waiver wire. Brandon Clarke nearly made today’s list, but he’s someone that you should watch out for if any of the Grizzlies big men get deactivated for any reason.

White at this point could be a short-term solution with Lonzo Ball back in the mix this week, but we can’t ignore the damage he’s done and he can absolutely still grab 20-plus minutes in Chicago’s rotation. He’s quick and can serve as a good change-of-pace spark off the bench. He’s scored at least 20 points in his last couple of games and he’s dished four or more dimes in his last three contests. He’s blocked shots and grabbed swipes in two of his last three games. The Bulls face Orlando and then Washington again - who White just dropped 20 on - and if the leaders of the Eastern Conference are ahead double figures in those games, then White could be given more reserve minutes.

With the Magic backcourt still banged up, they’ve had to rely on their mid-court to bail them out a bit and Harris has always proven that if he can stay on the floor then he can serve as a very useful two-way player. He’s dropped three straight games in which he scored 20 or more points. He’s playing heavy minutes and he’s consistently taking double-digit shots. Orlando needs all of the help they can get offensively and Harris is good at working the elbow with the ball. He’s shooting nearly 45 percent from the field and over 35 percent from beyond the arc. He’s also grabbed seven steals total in his last two outings. As long as we’re seeing his minutes remain high and he’s taking a lot of shots, he can be trusted.

The Pelicans continue to have holes when it comes to forwards and Jones, who was an early-season waiver wire flier, is back in play. It’ll be very telling to see how involved he truly is in the Pelicans offense once (if) we see Zion Williamson take the floor and Brandon Ingram is 100 percent, but Jones has been playing over 28 minutes per game and he’s scored 14 or more points and pulled down six or more rebounds in each of his last three battles. Jones has been a blocks machine lately as he’s swatted away at least one in each of his last 10 games and he’s blocked three shots in both of his last two contests. His minutes give him a safe floor and if he keeps posting boards and blocks, Jones is worth holding onto.

After recently coming off of the COVID list, Caldwell-Pope has scored in double figures in both games and dating back to before he got deactivated, he scored 10-plus points in 5 of his last 6 games. He’s blocked shots in both games since he’s been back in the fold and he grabs 1.2 steals per game. He plays excellent perimeter defense and it’s very shocking that he doesn’t average over 30 minutes per game. He hits at least two three-pointers per game and grabs 3.6 boards per outing which we can hang our hats on. His defense keeps him in games and as much as the Wizards want to also play their younger players, they are 18-18 and aren’t the best team defensively and that’s where Caldwell-Pope thrives and he’ll absolutely be closing out games.

With Atlanta missing a lot of pieces, Gallinari should come back into a lot of shots although don’t be surprised if he’s limited first game back from the league’s COVID protocols because we’ve seen it a ton already. Going have to when he was last active, Gallinari scored in double figures in three of his last four games. Gallinari is shooting nearly 42 percent from downtown. He’s kept at the elbow and arc a lot utilized as a bailout option, but he is capable of playing the low block. Once John Collins comes back, you’ll likely release him, but in this environment, playing time is key and Clint Capela can’t stretch the floor at all.

Smith has had four strong games and could be in line for a few more with other Suns big men on the COVID list. He’s produced two double-doubles in his last three games. The forward-center out of Maryland hasn’t been able to play significantly at all because of how skilled Deandre Ayton is, but, with Ayton sidelined, Smith has scored 11-plus points in four straight games with a few good matchups coming up for him. Smith has blocked shots in three straight games with two of those games being multi-block games. He’s ripped down no fewer than seven rebounds in each of his last four games and he’s doing all this playing fewer than 30 minutes in every game. Rent him for the next few games and see if he sticks at all as a backup option when Ayton returns.

Like Harris, Ross benefits with Cole Anthony banged up and Jalen Suggs still out. He came back from the COVID list and scored 33 points against Boston. He’s recorded two three-steal games in his last three and he’ll get the minutes and shots until the Magic’s backcourt health improves. He shoots about 10 shots per game and he scored nearly 12 points per game. He’s exceeded his scoring average in six of his last seven contests. He can fill in at multiple positions and because of the emergence of Franz Wagner and Jalen Suggs, his path to playing time has been stifled a bit. Dating back to the middle of December when he last played, Ross logged three straight games in which he played over 32 minutes.

A lot of forwards are unavailable for the Clippers and even Marcus Morris is a bit hobbled and Coffey has been able to plug the lane a bit. He’s scored 14 or more points in his last two games. He’s taken eight or more field goals in four of his last five outings. He helps clear the garbage in the lane and has good hands. He’s posted steals in each of his last six games. Paul George remains out and when healthy Morris is going to have to fill in a bit at center and Coffey can shift to PF to help there and that can keep him involved until at least Nicolas Batum is healthy. He’s played at least 23 minutes in six straight contests and grabbed six or more boards in three of those games. He’s also blocked shots in three of his last four outings.

Avdija has been on fire lately and he’s played fewer than 29 minutes just one time in his last six games. He’s agile and has been a hound on the perimeter. He’s grabbed steals in seven of his last nine games. He’s good on transition and helps the Wizards keep the tempo up. He’s scored double figures in six of his last eight outings. Avdija will also bang around with bigger players especially if Kyle Kuzma is on the perimeter. He pull down five boards per game and has pulled down more than five in four of his last six games. We’ve seen his minutes all over the place and it’ll be interesting to see how the Wizards rotation shifts when Rui Hachimura is finally ready to go but for now ride Avdija while he’s producing in multiple categories consistently.

We haven’t had much use for Holiday because of how impactful Chris Duarte was right from the start, but with multiple backcourt players out, Holiday is once again in play. He’s scoring 10.3 points per game and he’s grabbed four or more boards in three of his last five battles. He’s played 35 minutes or more in four of his last five games. Holiday will take a lot of three-pointers and he’s hit 11 combined in his last two outings. He’s also grabbed steals in five straight games with two of those games being multi-steal outings. Now that Caris LeVert is on the COVID list, he should be taking more shots over the Pacers next few games. He should be the Pacers second prioritized scorer behind Domantas Sabonis until Malcolm Brogdon returns.