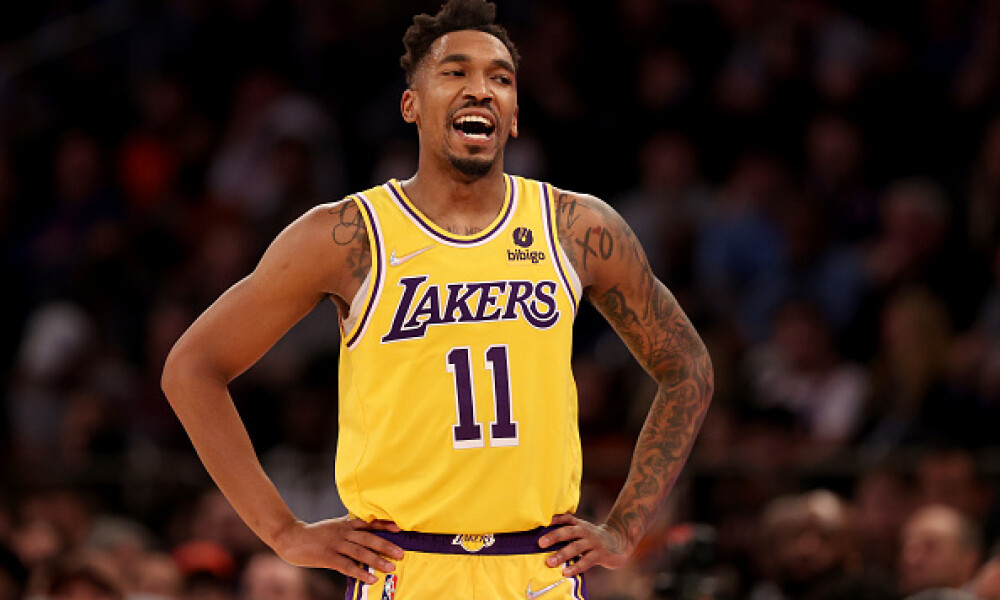 Make sure you know whether or not there is a maximum amount of moves you can make in your league. If there isn’t, take full advantage and look at how many games teams are playing each week. The Spurs play five games this week, and for those with free-for-all waivers and no move-maximum can stack their rosters with Spurs players so they can get even more production. Opportunity is key and the more games the player plays, the better the opportunity is for higher overall production as there are a lot of injuries around the league. For those with move-maximums either for the season or the week, make sure to check to see which teams have heavier schedules for the next two weeks that way you can plan which player on your bench to rotate on and off waivers.

Monk has been hot scoring from the field and the Lakers have rewarded him with more playing time. Monk has played 29-plus minutes in five of his last six contests. He took double-digit shots in all five of those games and even with LeBron James back in action, the Lakers can always use supplemental scoring beyond James, Anthony Davis and Russell Westbrook. Monk has hit the 20-point mark in three of his last four contests. He’s been producing on the defensive side of the ball as well swiping a ball in four of his last six games and pulling down at least four boards in five of his last six games. Monk will often be utilized as a bailout shooter and while hanging at the arc can limit him, he’ll get fed high-percentage shots that feature minimal defensive attention. He’s nailed at least four 3-pointers in three of his last four contests. The minutes and shots have been there and if he keeps fighting for boards from the elbow, his minutes will stay up.

The Spurs have the super-slate this week and they’ll need McDermott’s shooting to keep them in games. After missing a few games, McDermott has scored 13 or more points in his last twp games and grabbed four rebounds both times. He’s known for his floor-stretching ability and long-distance shooting, but McDermott has had to mess around in the lane to produce more. The Spurs don’t exactly have the most threatening frontcourt and McDermott will continue to play over 20 minutes per game. He takes nine to 10 shots per outing and hits at least two 3-pointers per game. He’s scored 11 points per game and because he is playing in five games this week, your scoring will get boosted. Then if he’s not doing anything else once Sunday ends, re-release him back on waivers.

It isn’t looking like we’ll see Michael Porter Jr. return to the court this season and that should continue to benefit Green who can play multiple positions. He’ll rotate between both forward spots and he’s excellent at running the floor, which will benefit him especially in transition. We’ve looked at Green as a useful waiver wire flier for years because of his ability to run the floor, play multiple positions and he proves himself from a production standpoint year after year when given the minutes. He’s scored in double figures in five of his last six games and he’s played at least 29 minutes in six of his last seven outings. He’s pulled down four or more rebounds in three of his last five games and he’s even blocked shots in four of his last five games with two of those games being multi-block performances. JaMychal Green and Zeke Nnaji will have to help relieve Nikola Jokic at times and Aaron Gordon shifts down to SF and Green should continue playing at least 27 minutes per game for the rest of the way (unless Porter miraculously comes back).

Jalen Green was initially supposed to miss a few games, but it seems he’ll need some more time to recover and Mathews has been benefiting by receiving 31 minutes or more in each of his last five games. He’s scored 11.9 points per game this season and he’s exceeded that average in six straight contests. He’s also hit three or more three-pointers in his last five battles. Mathews is even pulling down 3.1 rebounds per contest and he’s making his case for getting more minutes even when Green returns by grabbing steals in four of his last six contests. Mathews has taken 10 or more shots in three of his last five outings. If you need a scoring boost, Mathews is a good player to add and we should watch to see if his rebounding has improved. He’s not afraid to take contact and that will help his point-total because he’ll go to the free-throw line a bit as well.

COVID-19 has stung the Hornets and they’ll be without LaMelo Ball, Terry Rozier, Mason Plumlee and Jalen McDaniels - meaning the rest of the team will be busy little bees. Martin, specifically, can play multiple positions and will be on the floor for a long time until whenever the others are out of the league’s COVID protocols. We should expect Martin to take 10 shots per game until his teammates return. He’s also grabbed five or more boards in two of his last three games. Martin was sick (non-COVID) and had to sit out for a few games, but now that he’s better he’ll need to help produce offensively out of the backcourt by running the point a good amount of the time. Yesterday, he took 11 shots and scored 19 points. By running the point more and getting more minutes in general, expect him to produce more dimes and steals. He has been pulling down 4.2 rebounds per contest and with more on-court action, his rebounding should improve as well. He’s a must add at this point.

Joe Harris is going to be out for another month and change and Bembry has been indirectly benefiting by getting more minutes. He’s not as much of a scorer, though he’s scored eight or more points in four of his last six games. Bembry earns his minutes from his defense. He doesn’t go for fakes and uses his agility to fight through screens set at the elbow. He’s produced steals in four of his last five games and he’s swatted away shots in five of his last seven games. Blake Griffin is out of the rotation meaning LaMarcus Aldridge and Nicolas Claxton are helping out at center and with Bruce Brown helping out more at SG, Bembry should get a good amount of SF minutes. He’s grabbed five or more boards in five straight games and between the rebounding, steals and blocks, Bembry deserves a spot at the end of fantasy basketball benches. He’s played no fewer than 23 minutes in seven straight games.

Morris has been flying under the fantasy radar and I have no idea why. We don’t know when or if we’ll see Kawhi Leonard return to action and even when Nicolas Batum is ready to return, Morris should be able to play close to 30 minutes per game. He’s scored 21 points in both of his last two contests and hit 10 three-pointers total in those games. He’s been active for just eight games this season, but has grabbed five or more boards in four of his last six contests. Morris is a strong long-range shooter and serves as a solid enforcer on the defensive side of the ball and now that we’re seeing him play full minutes and he’s taken 10 or more shots in four of his last six games, we can trust him for his scoring and rebounding. His defense and size are needed and his spot in the Clippers rotation is secure. Morris is a career 40.8 percent three-point shooter.

Jalen Suggs will be out for a bit and that opens up more shots for Harris. A few years ago, even in a deep Denver rotation, Harris stood out for his impactful two-way basketball. He’s been a bit banged up over his last few years and that has hindered his production. Lately, he’s been a scoring machine hitting the 11-point mark in five of his last six games and he’s also grabbed steals in five of his last six contests. Harris has played 31 minutes or more in four games in a row and the inexperienced young Magic can use a veteran presence on the floor to help keep the offense organized. Cole Anthony can’t score all of the points and Harris will even help run the point a bit. He’s dished three or more dimes in three of his last six contests. He’s even pulled down more rebounds lately producing five in two of his last three battles. He’s getting more opportunities to shoot as he’s taken 10 or more shots in four of his last six games.

The Mavs can’t rely too much on their frontcourt to put up offense and Kristaps Porzingis has been in and out of the lineup and as long as he’s healthy Finney-Smith will log a lot of minutes. He’s scored 14 points and dished at least four dimes in two of his last four games. Finney-Smith’s perimeter defense is excellent and he’s very lanky and will grab a good amount of steals either on the perimeter or right in the lane. He’s posted steals in each of his last eight games and he’s even blocked shots in his last two contests. Finney-Smith plays 31-32 minutes per game and he’s taken double-digit shots in three of his last six outings. Finney-Smith will grab long rebounds as well and he’s averaged 4.4 boards per contest. He provides a little bit of everything and plays a lot of minutes and won’t lose his spot in the Mavs rotation. If he stops grabbing steals and scoring points, drop him.