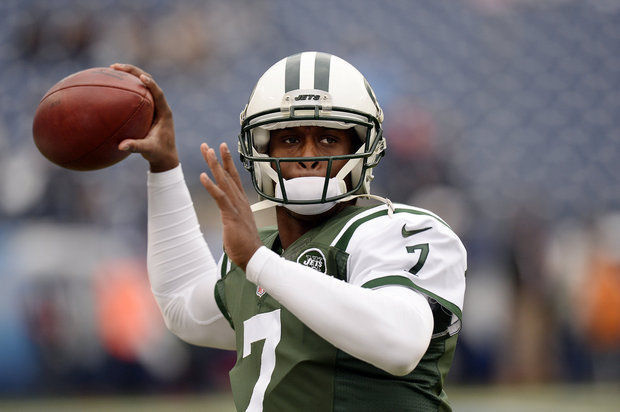 Have you ever wanted to understand the systems and playbooks of every NFL head coach and coordinator? Do you wish that you had full offensive line breakdowns for all 32 teams? How about 30 proven winning fantasy football strategies? Well if you take all of that and add in 500+ player rankings, in-depth articles and team by team breakdowns you have the 2015 Fantasy Alarm Fantasy Football Draft Guide. We also put together a special how-to guide for new daily fantasy sports (DFS) players along with some advanced strategies for experienced players. Get the only product that will help you win both seasonal and weekly fantasy football this year.

FIND OUT MORE ABOUT THE DRAFT GUIDE

Here is the Training Camp Report for Wednesday August 12th:

Enemkpali Says Knock You Out

Turns out that a broken promise to attend a charity function and the reimbursement of the $600 airfare will cost Jets QB Geno Smith the next 6-10 weeks including at least the first three weeks of the NFL regular season. What ultimately led to now former Jets OLB Ik Enemkpali punching Geno Smith had to be more than just the delay of the $600 airfare but just what was done and said immediately before the punch we don’t know.

What we do know is that somehow Ryan Fitzpatrick is a starting QB again and as always has a legitimate shot at playing himself into the full time gig. Fitzpatrick is the bane of my existence especially when he has that ridiculous beard. But in this case, and I hate to say it but he may actually be a slight upgrade for this Jets offense. Fitzpatrick played under Chan Gailey previously in Buffalo between 2010-12 so he is familiar with the offense.

Both Geno Smith and Fitzpatrick are turnover machines but Fitz has the ability to get out of the pocket and pick up first downs with his legs. From a fantasy point of view, Fitzpatrick loves to run inside the 10 yard line making him a threat for rushing TD’s as well.

Its very odd to have the starting QB go down and actually upgrade several of the Jets receivers but that is exactly what I had to do this afternoon after the news broke. I moved Marshall up four spots and Decker just two spots with the news that Fitzpatrick will be under center to start the season. We need to look out for the chemistry now between Fitzpatrick and the WR’s. Geno Smith and Brandon Marshall were getting along quite well and thus this could wind up impacting Marshall in a negative way. Also if Eric Decker and/or Jeremy Kerley find their way into Fitz’s good graces that could improve their fantasy standing as well.

I trust that by now you are all aware that the NFL pushed back extra point attempts from the 1.5 yard line to the 15. This means that every point after attempt amounts to a 33-yard field goal attempt. I’ve stated on my SiriusXM show that I am very curious as to whether or not more teams will go for two point conversions as a result of the longer kick. The team that intrigues me the most is the Eagles because of Chip Kelly’s history of going for two after just about every touchdown.

On Monday this question was posed to Detroit Lions head coach Jim Caldwell who had some very interesting thoughts on the topic. Caldwell said, “I’m sure there are going to be some teams that we play against, we may be one of them, that decide to go for two every single time.”

It’s interesting that he drops the possibility of his Lions going for two “every time” which of course doesn’t really mean every time. What Caldwell is referring to is the possibility that the two point conversion could become the default standard after TD play. Even though an NFL kicker will make a 33 yard FG 95% of the time, there is the temptation of being just two yards away from the two as opposed to 33 yards away from one.

I am starting to believe that we may see the day in fantasy football where we have a lineup decision of utilizing one of these two point specialists. Players like Tim Tebow, Mike Tolbert and even J.J. Watt may become viable options for folks if indeed there is a two point conversion barrage either now or in the near future.

Johnny Manziel is dealing with some elbow soreness at Browns camp. The team says it is nothing to worry about but those of us who remember the same issues for Johnny football are starting to wonder if there isn’t more to this injury.

It has taken free agent RB Chris Johnson over 24 hours to decide whether to take the Cardinals one year contract offer or not. To me this is either the height of arrogance or a reveal that CJ?K has a handshake agreement with another team (Cowboys) to join their club closer to the end of training camp.

The Steelers have decided on Garrett Hartley as their replacement for injured placekicker Shaun Suisham. Hartley is only a career 81% on field goals in his career and most of that was kicking in the controlled environment of the Superdome.

Remember when I told you not to panic about Andre Williams getting first team carries at Giants camp last week? Well the team set their first preseason depth chart and indeed Rashad Jennings is the Giants RB1. Williams is a backup and potential short yardage back only.