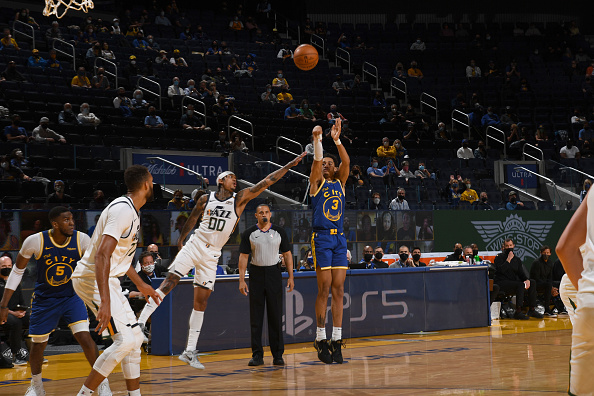 The Warriors ruled Stephen Curry , Andrew Wiggins and Draymond Green out, so Poole is going to get a LOT of opportunities to have a big night. This guy can flat out score the rock. He hasn’t topped 20 minutes in each of the last two games and scored 20 actual points in each game. He’s scored in double-figures in four straight and in seven-of-nine. Poole’s price tag is exploitable.

Memphis is resting Ja Morant , Dillon Brooks , Jaren Jackson , Jonas Valanciunas , Kyle Anderson , Grayson Allen and Brandon Clarke , aka their whole roster. With nobody off the floor, Melton averages 1.02 FP/min this season, so he’s going to have the rock a LOT tonight. He could see upwards of 30 minutes here and really shine. When you remove just Ja Morant from the equation, Melton sees a four-percent usage increase and averaghes 1.13 FP/min.

I mean, has Stanley Johnson scored 35 in the 58 previous games he played? He literally scored 35 actual last time out! He went for 65 DKP! No reason to think he won’t play all the minutes once again with the Raptors resting all of their guys. Johnson isn’t a high usage player, but we saw that if he gets hot, he’s not turning down shots. Plus, who would he defer to anyways?

With Richuan Holmes, Marvin Bagley and Harrison Barnes all officially listed as out, Metu is in play for another hefty workload. He has topped 27 minutes in three straight games and in each game, he’s put up 26+ FDP. Metu has given us at least 11 points, five rebounds, two assists and at least one steal or block in each of those previous games. Memphis’ front court is essentially all out and Metu could have a career game here.

With Memphis resting Jonas Valanciunas , Jaren Jackson Jr. and Brandon Clarke , Tillman should play as many minutes as he can handle. With those three off the floor, Tillman averages .9 FP/min, which is a really solid output. It’s a great value option at a position with a ton of injuries and question marks up top.

McGee STARTED alongside Nikola Jokic last night and played well, putting up a double-double while blocking two shots. This is what he does. He just produces when he’s on the floor. He may have a bad rap for doing a lot of stupid stuff on the floor, but he is a good DFS producer. McGee is a nice pivot from the chalky Metu at center.