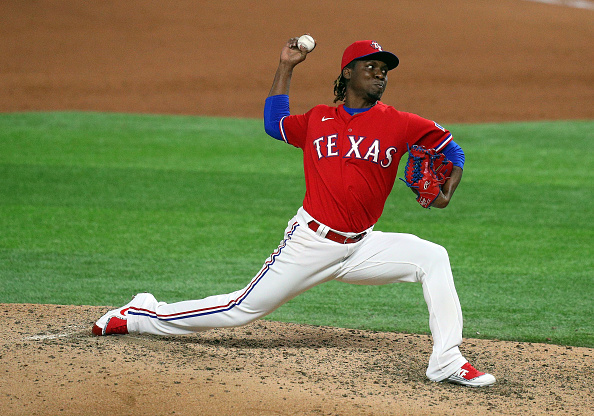 In an effort to clear a spot on the 40-man roster for free agent David Dahl, Texas traded reliever Rafael Montero to Seattle for two prospects on Tuesday:

Another trade for the Rangers, who have been very busy: Right-handed reliever Rafael Montero is headed to the Seattle Mariners, sources tell ESPN.

Seattle is trying to rebuild a bullpen that was worst in the AL. They've hit free agent RP up, too. One possibility: Blake Treinen.

Montero recorded eight saves in as many chances in the shortened 2020 season and should move into a similar high leverage role with the Mariners who need to rebuild the bullpen. Since oft-injured Kendall Graveman projected to be the team's closer, this may be the first of a few moves by general manager Jerry DiPoto.

As for the Rangers, this opens a camp competition between at least three relievers to be in the mix for saves or a dreaded bullpen by committee for fantasy purposes. Speaking of fantasy, it's time to explore the ramifications of this trade for the upcoming season.

Although Montero missed time at the start of 2020, he logged 17.2 innings with eight saves, a 19:6 K:BB, 4.08 ERA, 4.00 SIERA and 1.02 WHIP. Beneath his surface statistics, Montero generated fewer ground balls, more hard hits and fewer swinging strikes. Perhaps the Rangers took heed of this small sample, along with Montero being arbitration eligible at the end of the season, before deciding to move him for prospects.

During his time in Texas, Montero appeared in 39 games finishing 22 of them over 46.2 innings with 53 strikeouts against 11 walks, a 3.09 ERA and 0.986 WHIP. Buoyed by a strong 2019 sample, these numbers provide a larger view of him as a reliever but he's a low risk add to a bullpen in need for Seattle.

Fuel for my wariness taking Montero in upcoming drafts lies within his Statcast data:

Discerning how Montero bounces back may be found in his arsenal. His health in the truncated season might play a part in the numbers above due to his late start suffering from elbow tendinitis. Montero's change-up and slider both produced fewer swings and misses in 2020. Starting with his change-up, Montero's whiff percentage dropped by 18.2 percentage points and his put away percent decreased by 20 points. His slider's whiff percentage fell by 9.5 points and the put away percent by the pitch fell by almost eight percent.

When projecting him for 2021, as of this writing, Montero should open the season as the closer for Seattle. If he pitches well in spring, perhaps a return to his overall numbers with Texas can happen. However, use his SIERA from 2020 (4.08) and his xERA from Statcast (4.61) to create a sliding scale of where Montero's ERA for the upcoming season may end up and value him accordingly.

For those in leagues with deep rosters or draft and hold formats, Seattle added Andres Muñoz from San Diego in a late season trade. Presently rehabbing from Tommy John surgery, Muñoz may be groomed to take over as closer later in the 2021 season. Adding Montero means the Mariners do not need to rush his recovery. For those interested in Muñoz, here's a glimpse:

What an electric debut for the #Padres' Andres Munoz.

He dialed up a 101.5 mph fastball to get a double-play ball.

Then he topped 101 twice to Brian McCann, followed by a nasty slider to earn his first career K. pic.twitter.com/OLkaVic9A9

How the Rangers bullpen evolves depends heavily on how Jose LeClerc rebounds from his grade two strain of his teres muscle in his shoulder which cut his 2020 season short. Jonathan Hernández assimilated well to the bullpen winning five games, notching five holds with no blown saves and improving his advanced metrics. Also lurking in the periphery, rookie Demarcus Evans and southpaw Joely Rodriguez.

Due to his contract, LeClerc may get first chance at closer for Texas in 2021. However, his struggledswith control in 2019 caused his hold on the ninth inning to slip. Without seeing him throw, it's tough to predict how LeClerc will fare meaning his spring training results focusing on velocity and command may determine his outlook. LeClerc should be treated like a wild card in this bullpen for saves. There's a chance he returns atop the high leverage arms for the Rangers but it sets up to be a potentially bumpy ride.

Projected Hernández to close makes sense. He shined in 2020 with a 2.90 ERA, 3.67 SIERA, 1.03 WHIP, 31:8 K:BB and five holds with no blown saves over 31 innings of work. Hernández improved his swinging strike percentage to 13.9 and his strikeouts minus walks percent to 18.4 working solely as a reliever. His Statcast data also jumped off the page ranking at or above the 90th percentile in each of these indicators:

Not only did Hernández improve his swing and miss metrics, but he prevented hitters from making hard contact evidenced by his 18.3 sweet spot percentage allowed, a .192 expected batting average, .292 expected slugging percentage and 2.70 expected ERA. Although his sinker does not generate swinging strikes, if Hernández throws more change-ups in 2021 his strikeout rates may increase. Hernández used his sinker in 47.1 percent of his pitch mix but note his slider and change-up numbers:

From a fantasy perspective, the only thing holding Hernández back from the closer role, his ability to work more than one inning. This could prompt Texas to open the season with Hernández as the extinguisher, entering games in the highest leverage moment not exclusive to the ninth inning since he projects to be the best reliever in this bullpen. For the visual crowd:

Jonathan Hernandez was ???? out of the 'pen for the Rangers with two no-hit innings and four K's. pic.twitter.com/QLWdzm0aO9

Demarcus Evans made his major league debut with Texas in 2020 as well. Across two levels in 2019, Evans recorded 12 saves in 15 opportunities over 60 innings with a 100:39 K:BB, a combined 0.90 ERA and 1.03 WHIP. Of course, this happened in High-A and Double-A, not the majors. As the season progresses, Evans may earn a larger role in the bullpen. However, one must account for his walk rates. In 22.1 innings at High-A he posted an 18.9 walk percentage and at Double-A, Evans owned a 15.2 walk percentage in 37.2 innings. Usually ZiPS projections help when valuing a rookie. According to ZiPS, Evans projects for four wins with 79 strikeouts, 49 walks, a 4.27 ERA and 1.63 WHIP. It's too early to predict his ratio statistics, but if Evans struggles throwing strikes he may need time to adjust to the majors. Still:

Last, Joely Rodriguez represents the top southpaw in the Rangers bullpen. He also missed time due to injuries in 2020 but logged 12.2 innings over 12 outings with a 2.13 ERA, 3.09 SIERA, 1.03 WHIP and 17:5 K:BB for Texas. There's a chance in league only formats or deeper leagues (15 teams plus) for Rodriguez to accrue ancillary saves if Hernández or LeClerc face right-handed hitters then giving way to him for a left-handed hitter or two at the end of a contest for a save chance.

As it stands now, Seattle should move Montero to the closer role but predicting Scott Servais’ usage patterns comes with some trepidation. Texas probably uses spring training as an open competition to determine who moves into the high leverage mix. For those taking the slow approach, focus on Muñoz and Hernández to stash in drafts.

Be sure to stay with Fantasy Alarm across all fantasy formats to remain ahead of the competition. Stay safe and be well.