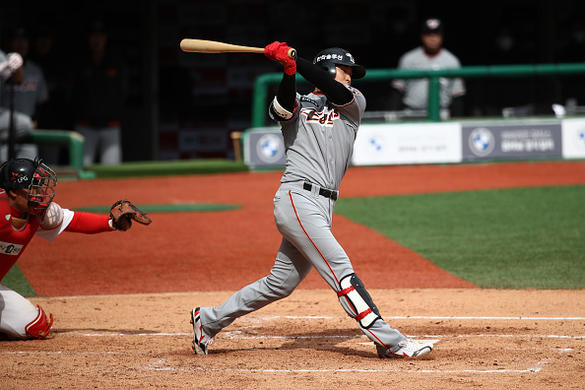 Entering games on day three of the season, hitters seem to be ahead of schedule when compared to last year’s results even with the depressed flight baseball:

Some #KBO numbers. Small sample size warning alert, but there were 22 home runs hit over the first 2 days of this season, and all 10 teams are on the board. Last year, 15 homers were hit in the first 2 days, and 3 teams didn't hit any.

On Thursday during the last game of each series, runs rose across the board with Doosan scoring nine runs, the NC Dinos, Kia Tigers, and Hanwha Eagles plating eight along with the Lotte Giants crossing home seven times. With the spike in runs, six more home runs has pushed the three game total to 28 through three contests. Lotte and the NC Dinos remain undefeated to start the year while keeping Samsung and the KT Wiz still winless. Check out the rest of the tangible details from today’s action around the KBO in the Round Up.

The southpaw had his slider working as he was incredibly effective at getting Ks in the bottom of the zone. pic.twitter.com/MJXFENEzLH

Chris Flexen won his debut in the KBO for the Doosan Bears throwing 94 pitches over six innings allowing seven hits, three earned runs, and a walk with six strikeouts.

In injury news, the SK Wyverns suffered a loss:

#KBO injury note: SK Wyverns catcher Lee Jae-won suffered a broken right thumb after getting hit by a pitch vs. Hanwha Eagles; no word yet on how long he'll be sidelined

For fans looking to see how to acclimate to the KBO and playing without fans, here’s an article worth reading:

What’s it like to play professional baseball during a global pandemic? Former Brewers and White Sox infielder Tyler Saladino said the experience is in some ways surreal. Story: https://t.co/QqcutaZC2E pic.twitter.com/CZhF2PbEYB

There’s undue pressure on the import players to perform. With Saladino off to a slow start, he may press a bit this weekend.

Friday represents new match-ups for the 10 teams. Here’s how they line up: