Welcome to the KBO 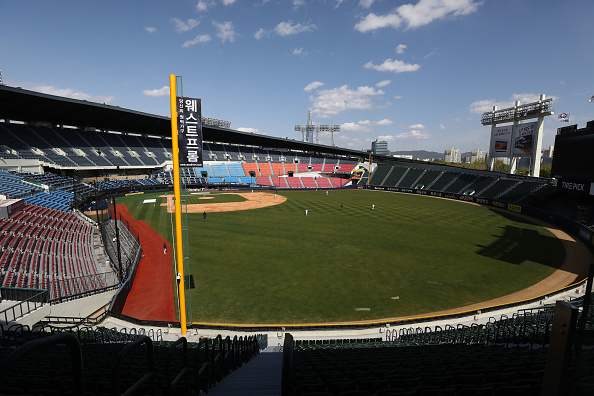 While major league baseball continues to assess how to return to play, the professional league in Korea will commence on May fifth. This means there’s DFS at stake for the baseball crowd. Although some familiar names will be seen on rosters, the KBO (Korean Baseball Organization) limits three foreign players per roster on each of its 10 teams. This makes decisions risky when taking on a Quad-A player from the majors.

Before delving into each team with players of interest from its roster, some background intel on the league will be beneficial. First, after an explosion on home runs in 2018, the league instituted use of a baseball with reduced flight effects. Last year, KBO teams averaged 4.55 runs per game which seems robust, but a marked drop in home runs occurred last season. This trend will carry over to the upcoming season.

What does this mean, well on the surface it’s like throwback baseball. Pitchers try to keep the ball down in the zone with sinkers, use off-speed pitches to generate swings and misses but throw to contact. Power hitters lurk in the corners of the infield and outfield. Teams sacrifice offense for strong defense up the middle at second base, shortstop and center field. Getting on-base remains a staple for KBO hitters. So, less strikeouts, more players on base, defense can be a key to success and strikeout pitchers remain a rarer commodity in the KBO. With this in mind, teams try to identify pitchers from the majors who fall through the cracks or profile as a minor league arm who cannot break through. Think of Josh Lindblom who rode his success in the KBO to a contract with the Brewers. He will be seen in the coming leaderboards.

Understanding a baseline of statistics will help identify players to target in DFS games for the KBO. With 10 teams in the league, they face each other 16 times for a 144-game schedule. Like the majors, the KBO will play a shortened season in 2020. First, here’s the top-5 in key hitting categories last year:

Some familiar names appear in Jerry Sands, Jose Miguel Fernandez and Mel Rojas Jr. But, Sands defected to Japan on a new contract graduating from the KBO to greener pastures. Since pitching represents a bigger need in the KBO landscape, teams usually carry two of their three foreign roster spots with starting pitchers. Once again, for reference, the league leaders in pitching from 2019:

In the KBO, pitchers will be encouraged to work deeper into games but it depends on how he’s doing along with pitch count. Seeing how well Lindblom fared last year, this opens the door for new leaders across the board. He averaged almost six and two-thirds innings during his 30 starts last season while leading the league in strikeouts averaging 8.7 strikeouts per nine innings. Part of success in DFS lies in identifying pitchers with strikeout upside, innings pitched and a chance at the win. Knowing pitchers may work deeper into games can benefit the wins category, but with more runners on base and pitching to contact can depress their ceilings.

Delving deeper into the numbers between the KBO and the MLB, there’s some stark differences which illustrate the difference in how the game will be played in Korea. League average in the KBO of .267 sits 15 points higher than the MLB and players in Korea get on base 14 percent more often. But, slugging percentage in the KBO lagged last year by 50 compared to Major League Baseball due to the reduced flight baseball. This changes things slightly but extra-base hits, runs and RBI remain available. Plus, players in the KBO will be more aggressive on the bases along with trying to steal more as well.

When comparing the pitching statistics, it may be easier to list each league average by category:

Less home runs depressed ERA in the KBO last year but with more traffic on the bases illustrated in the higher WHIP compared to the major leagues. Again, fewer strikeouts needs to be accounted for when targeting starting pitchers for DFS purposes. However, Dan Straily could be intriguing since he works in the top of the strike zone for strikeouts elevating his fastball whereas most of the KBO works down in the zone trying to induce ground balls. Think of KBO teams aligning their pitching philosophy with the former Pirates regime.

One more huge key, rostering foreign players in DFS for the KBO. These two charts will show how players in the KBO from Korea compare to their import counterparts. Starting with hitters, there’s a stark contrast in the slash lines, especially in slugging percentage:

When perusing the pitching statistics, key on the reduced ERA with a slight uptick in strikeout percentage:

Taking all of this in, DFS will be centered around identifying pitchers with strikeout potential and a win. DraftKings will reward 2.25 points per inning, two points per strikeout and four points for a win while runs count as negative two along with hits or walks resulting in negative 0.6 points. On FanDuel, wins will be worth six points for KBO scoring with a quality start getting four points, strikeouts are three points and innings pitched are three points. They reduce three for each earned run against. For the batters, DK awards three points for a single, five for a double or stolen base, eight for a triple, 10 for a home run, two for any RBI, run, walk or hit-by-pitch. On FD, hitters accrue three points for a single, walk or hit-by-pitch, six for a double, nine for a triple, 12 for a home run, six for a steal, 3.5 points for each RBI and 3.2 points for each run.

In my next article, targets on each team by position along with the foreign players on them to make the most of the DFS chances if craving some baseball on Fantasy Alarm.