This year, a big part of the offseason coverage leading up to the draft will be my positional previews. Starting with this year’s crop of quarterbacks, I will be breaking down tape and giving you a full evaluation of each prospect, including measurements, school, year, games I’ve watched (with links), draft range, strengths, weaknesses, summary, and a pro comparison…

As you all likely know by now, scouting is a never-ending process. While I am still combing through the seemingly bottomless pit of prospects for this year, below are my top-seven quarterbacks. Keep in mind that I plan on updating each position with more prospects as I continue to break down the tape.

With Darnold, the play is never dead. He has an elite ability to make things happen both inside and outside of the pocket when faced with tremendous pressure. While his 2017 was a down season of sorts statistically, it was this defining trait that was best on display due to the horrendous offensive line play that he was provided. While many scouts were alarmed by the 13 INT’s in 2017, it’s a wonder there weren’t more. Playing behind a leaky o-line this season may have actually helped him develop as an NFL quarterback, contrarilarly to conventional thought, because it forced his internal clock to speed up. Outside of that adversity, understand that you are looking at an elite quarterback talent in Darnold. He has plus athleticism, rare anticipation as both a thrower and scrambler, and a legendary arm. Don’t be deterred by his funky delivery; the stopwatch says that his release time is as fast if not faster than a majority of NFL quarterbacks. Entering the league, Darnold will need to clean up some bad habits developed in his past sophomore season – i.e. pocket footwork, decision making, and ball security – but overall he should still be one of the more NFL ready quarterbacks in this class, with likely the highest upside.

Final thought on Darnold – and this goes for some other top prospects in this class too… don’t let “draft fatigue” get the best of you. By that I mean that feeling of needing to nit pick a prospect because he has been in our crosshairs for so long. We have seen this happen a few times over the last handful of years with guys who were known top talents for more than just one college football season. Jameis Winston, Joey Bosa, Andrew Luck, JadeveonClowney, Myles Garrett, etc. come to mind. All ended up being great pros, despite the draft media and public having at least 18 months to tear them down.

Watch the tape, realize the talent, draft the player. 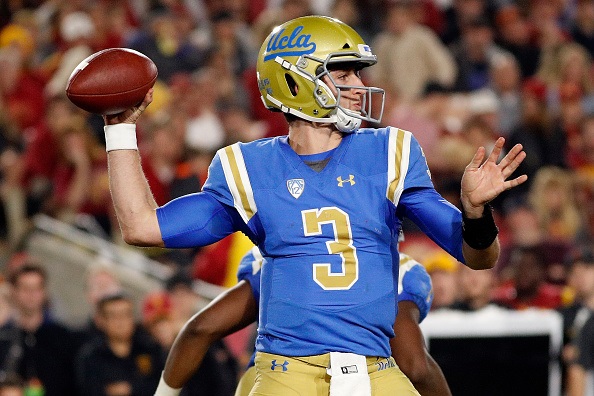 In terms of overall talent, Rosen is right there competing with Darnold for the top spot. I specifically remember after watching the first few series of the first game in his freshman year, saying that he had the talent to start in the NFL at that very moment. To memory I can’t ever remember saying that about any other first year quarterback. His natural skills as a drop-back passer, with the combination of an arm, footwork, and vision are second to none in this class and are reminiscent of Andrew Luck. Yes, my praise is high, but after watching hours of tape on the kid, I stand by my statement. The only questions that creep in with Rosen are his character – how much does he love football and is he coachable? – and his health – he was seriously injured twice in the last three years. If he interviews well at the combine and can pass all of the physical and psychological tests, I see no reason that he would fall out of the top-5.

Mayfield is a polarizing prospect amongst scouts and the larger draft community alike, but for the life of me I can’t seem to figure out why... Yes he is undersized, but are we still going to let that blur our minds after the success of guys like Russell Wilson, Drew Brees, Tyrod Taylor, Aaron Rodgers, Tony Romo, etc.? The fact of the matter is if the guy can play, he can play. Where Mayfield lacks in size, he makes up for in pinpoint accuracy and play extension. He possesses a good sense of his surroundings as a drop-back passer, while always keeping his eyes downfield. From the pocket he shows urgent mechanics without much wasted movement. When flushed however, he takes his strong and accurate arm on the move and looks every bit as comfortable. In the simplest of terms, Mayfield is a high-percentage passer with the arm talent to make almost every throw. I was torn on his pro comparison, between Drew Brees and Tony Romo, as both are accurate, undersized quarterbacks, with sneaky arm strength. His pocket presence and urgent mechanics most reminded me of Brees, while His lightning quick release and gunslinger mentality most reminded me of Romo. His ability to escape the pocket and create magic on the move though is what ultimately made the decision for me. 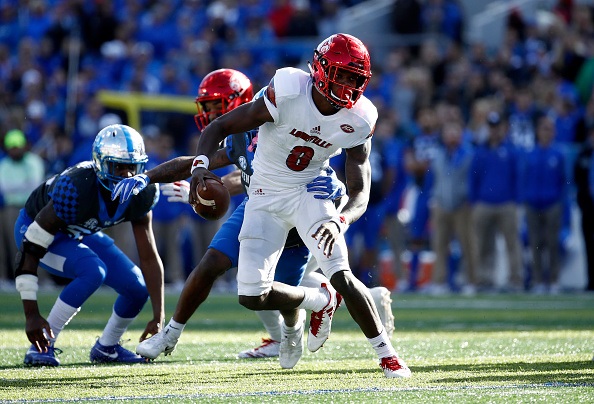 Watching his tape really brought me back, as I was reminded of the days of the elite running quarterback. Almost immediately flashbacks of Michael Vick rushed into my mind, however memories of the unique arm slot and cool as ice demeanor of Vince Young weren’t too far behind. While it is easy to get caught up in these types of comparisons, keep in mind that Jackson is a quarterback all his own... The second he steps on the field, he is the most talented athlete. In the open field he possesses the elusiveness and breakaway speed of a punt returner, while his arm talent is second to none. He really has a unique skill set in that regard. I liked to see that he has no wasted movement in his throwing mechanics, however too often throwing from a lower armslot could cause problems at the next level. With almost no throws that he can’t make, the real question for Jackson as an NFL quarterback will be with his accuracy. My thoughts are that even if he doesn’t progress as a passer from what he is now, Jackson will be a successful, long-term, starting NFL quarterback – provided a clean bill of health, of course. Like was done with Deshaun Watson and Nick Foles last season, Jackson will benefit from the use of RPO’s (run-pass options). His ability to devastate defenses with his legs will make RPO’s a deadly weapon for him as a passer. With open receivers, Jackson can make the throws. Don’t be surprised if he has RGIII type early success in his NFL career, especially if drafted to a contender.

I’m not going to sugar coat it… Right now, Josh Allen sucks. He would make it a lot easier on GM’s and NFL scouts if that was the end of the story, but unfortunately on tape – about five times per game – he makes you drool over his seemingly endless potential. Most of the time he is wildly inaccurate with almost no conception for how to have a receiver catch the ball rather than just gunning it at them, but then there is that every once in a while where he makes a 60-yard touchdown pass, on the run, across his body, between two defenders, look effortless. Any GM willing to take a chance on him has to have some balls because this is the type of first round pick that can either keep or lose your job. Best case scenario for Allen is to go to a team with an established veteran quarterback, whom he could learn from for at least a few years. 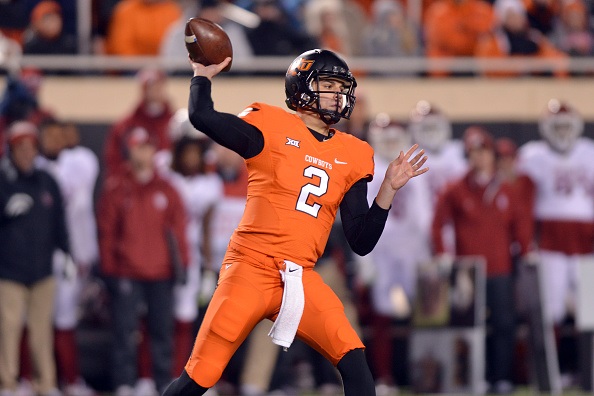 We’ve seen this type of guy before… A well-built, statcompiler, operating out of a gimmicky offense, against weak defenses each week. Yes Rudolph shows flashes of great potential, but always surrounded by playmaking wide receivers and throwing through wide open passing lanes, the fact of the matter is that I struggle to differentiate him from any of the similar players before him; Bryce Petty, Geno Smith, Brandon Weeden, and Paxton Lynch, amongst others. This style of “system college QB” doesn’t typically work out in the NFL. Having said all of this, Rudolph’s towering size, college stats, and excellent deep ball accuracy will have someone take a chance on him before day two of the draft is over.

At lot like Rudolph above him, Falk is another quarterback with the odds stacked against him making it in this league. He too is a system quarterback, but in many respects is a different breed. Personally, I liked Falk’s tape better than Rudolph’s because he showed far more consistency as a passer. He completed a high percentage of throws to every level, while his touch and accuracy on all passes showed better than Rudolph did on tape. Without the gaudy deep ball numbers and linebacker build however, chances are that Falk slides into the third day of the draft, giving him an uphill battle in his chances to ever even start at the NFL level. Best case scenario that I see for him is as a career backup quarterback.