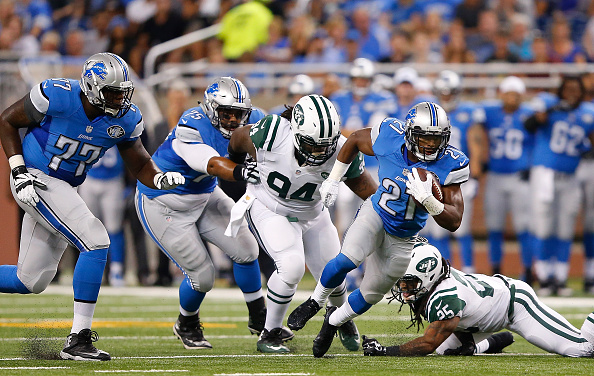 The 2015 preseason started off in sloppy fashion, featuring a combined three turnovers, 13 punts, a missed field goal, and only two touchdowns of which to speak of. The newly enshrined cast of Hall of Famers who were canonized over the weekend, were pretty much treated to a stinker of a game, featuring players who clearly hadn’t had enough camp yet to be involved in live NFL downs.

One player who did shine through the slop was Steelers running back/all-purpose star, Dri Archer who, on 11 targets, caught six passes for 33 yards, while also receiving four carries for 24 yards. In Archer’s one kick return, he broke it for 34 yards, giving the Steelers management some hope that they have a playmaker deep down on the depth chart. Don’t be surprised if Archer pushes listed number two running back, DeAngelo Williams, and is a difference maker during the regular season due to his speed and versatility, especially during Le’Veon Bell’s two-week suspension to start off the season.

Most of the Dallas starters didn’t see the field for one reason or another, leading to the ineptitude they showed on Thursday night against the Chargers. They allowed Chargers backup running back, Branden Oliver to take the form of 2006 LaDanian Tomlinson, as he bobbed and weaved his way to 53 rushing yards and a touchdown.

One Cowboy who did shine was La’el Collins; undrafted offensive lineman out of LSU, who many projected as a top-10 pick going into the NFL Draft. Collins fell out of the draft due to unfortunate circumstances concerning the death of his ex-girlfriend, but after being exonerated, the Cowboys were quick to snatch up his services. Right now he’s in a battle for the starting right guard spot with incumbent Ronald Leary, who many see as an injury risk due to his poor knees. Ideally you would like the best line in football to remain intact for as long as possible, but with what Collins showed on Thursday night in terms of fundamentals and in terms of mauling linebackers, it is going to be hard to keep him off the field.

The standout from this matchup was Baltimore’s Michael Campanaro, who at 5’9” 190 lbs, surprised many with his impressive skills. He hauled in a 45-yard touchdown from Matt Schaub and finished the day with two catches and 58 yards. Expect him to be a factor in the slot for the Ravens going into the 2015 season.

Jonas Gray was on top of the world in mid-November last season after toting the rock 37 times for 201 yards and four touchdowns. Later that week he missed a team meeting and his world came crashing down, getting only 20 combined carries across the rest of the season.

On Thursday, he began his road to redemption, rushing seven times for 74-yards and a touchdown against the Packers. With LeGarrette Blount experiencing MCL issues, Gray has a chance to get back in coach Belichick’s favor.

On a side note, potential Tom Brady placeholder, Jimmy Garoppolo was adequate in an extended showing, completing 20-of-30 pass attempts for 159 yards and an interception.

This one was pretty much a laugher, as the Jets couldn’t muster up more than three points. For the Lions on the other hand, their second round pick, Ameer Abdullah, was on display, showcasing what Jets coach, Todd Bowles called “Barry Sanders like quickness”. Abdullah finished up the day with 67 yards rushing on seven carries, likely edging him ahead of “starter” Theo Riddick. Once Joique Bell returns from the PUP list, he likely slides back into the starting role, but if Abdullah can continue to post this type of production, he will be hard to keep off the field.

Senorise Perry was the breakout performer on Thursday for the Bears, as he ran the ball 10 times for 89 yards and a touchdown. Impressive numbers for a guy who many don’t see making the team out of camp.

On the negative side for the Bears, their number one draft pick, WR Kevin White is in danger of missing all of the 2015 season due to a stress fracture in his shin. White was assumed to be the savior of this struggling Bears offense, but unfortunately his two month long bout with “shin splints” was more than the organization was willing to let off. Expect a training camp battle for the Bears number two wide receiver spot going forward.

The self proclaimed “best quarterback in the league”, Robert Griffin III, will be without two of his top tight ends for the rest of the season, as both Niles Paul and Logan Paulsen went down with season ending injuries last week; Paulsen during practice and Paul during their game against the Browns on Thursday night. Jordan Reed is expected to step up and take control of the position for the rest of the season.

On Thursday, Kirk Cousins looked, as one Redskins fan remarked to me over the weekend, “like the second coming of ‘Slinging’ Sammy Baugh compared to RG3”. During Thursday’s matchup, Cousins shredded the porous Cleveland second unit for 154 yards on 12-of-14 pass attempts. There isn’t much to make about this, but just keep in mind that Griffin will be on a short leash for most of 2015, unless he proves himself as once again, a viable NFL signal caller.

On the other sideline, the Browns have a quarterback drama of their own; in the man they call Johnny Football. In a small sample size, Manziel looked to be calmer out on the field, less likely to make boneheaded decisions with the football, however he still managed to flash that trademarked razzle-dazzle, with a 12-yard touchdown scamper four minutes into the second quarter. Although he still seemed to struggle as a passer, Cleveland management and fans alike must be happy with the maturation that they saw out of their flamboyant quarterback. In any event, Josh McCown still seems to have a pretty solid grip on the starting job, but a marked improvement for Manziel.

Marcus Mariota only threw one incomplete pass on Friday against the Falcons, however it was an interception on an intended screen pass. He also was strip-sacked for a score, making his NFL debut a bit of a disappointment, despite having adequate numbers.

Julio Jones didn’t appear to have missed a beat from last season, as he picked up right where he left off, catching four passes for 61 yards and a touchdown on Friday night against the Titans. Expect another huge season from him, despite the regime change in offensive philosophy.

Word is that E.J. Manuel is already losing the favor of new head coach, Rex Ryan. Friday night gave no indication as to why, as Manuel impressed against the Panthers. He connected with Deonte Thompson on a 51-yard touchdown, on his way to finishing the game 4-for-8 for 77 yards and a touchdown. After struggling so far in camp, the Bills would have liked to see more from him than just one big play, and it appears that Tyrod Taylor is in the lead for at least the number two spot on the depth chart. Adjust your fantasy rosters accordingly.

In Jacksonville’s first preseason game, they already suffered a stroke of their, what now seems perennial, bad luck, as newly acquired mega-free agent, Julius Thomas fractured his hand. He will be shutdown for the rest of the preseason in hopes that he will be healthy for Week 1 of the regular season.

With the departure of Jermaine Gresham, many see Tyler Eifert as a potential breakout performer this fantasy season, but we’ve all heard this song and dance before regarding tight ends (see: LaDarius Green 2014). Quarterback, Andy Dalton keeps Eifert in high praises, claiming that the young tight end is “Unguardable”. He finished the game with two catches for 13 yards, so you make the call. Let the rest of the preseason play out before anointing Eifert “Jason Witten Jr.”.

The Rams couldn’t get out of first gear on Friday night against the Raiders, failing to get anything going on offense. Oakland countered with 18 points of their own, most of which came in garbage time, a time that comes much sooner in Week 1 of the preseason than it does during the regular season. Third string QB Matt McGloin impressed by going 10-for-11 for 104 yards and a touchdown, but he has no shot to win the job out of camp.

Regardless of the score, the player of the night had to be rookie Tyler Lockett, who starred on special teams with four kick returns for 186 yards and a touchdown, while returning one punt for 18 yards. He proved to be the electrifying player that the Seahawks selected in the third round of this spring’s draft, hopefully allowing them to finally move on from the loss of playmaker Percy Harvin.

Brock Osweiler also impressed on Friday night, by completing 15-of-20 pass attempts for 158 yards and a touchdown, hopefully proving that life after Peyton wont be as bad as most people believe.

For now, Alfred Blue is listed as the number one back for the Texans, and for good reason, as he was clearly the most competent player at the position on Saturday against the 49ers. He rushed for 59 yards on nine carries, for a 6.6 YPC; double the number of any other Texans back. Expect him to keep the job unless for some unfortunate injury.

In his NFL debut, Jameis Winston was less than stellar, going only 9-for-19 for 131 yards and an interception. His offensive line didn’t do him any favors, allowing him to be sacked twice and hurried countless times. There is a lot of buzz around the Buccaneers offense this season, but if their line is shoddy, it’s going to be a long season.

Nothing much to really say here except for the fact that a Chiefs wide receiver finally caught a touchdown! Too bad it wasn’t in a regular season game… Backup quarterback, Chase Daniel turned back the clock on Saturday night, as he looked as good as he ever did at the university of Missouri, completing 17-of-20 passes for 189 yards and three touchdowns. It’s still Alex Smith’s job, but if he is underwhelming yet again, the masses might be calling for his jersey… I don’t know; anything is possible.

The Eagles special teams shined on Sunday afternoon, in particular, Kenjon Barner was a force, looking poised to compete with Darren Sproles for some return touches at least. Barner returned six punts for 131 yards and a touchdown, which happened to be of the 92-yard variety.

In other news, Tim Tebow was back in action for the first time since 2013… I don’t know if you had heard. Tebow looked a little rusty, but still was impactful in his own unique, indescribable way, as he was 6-for-12 for 69 yards and he ran four times for 15 yards and a touchdown. It’s Bradford’s job to lose, but Tebow is competing for the third string job right now. Unfortunately for him, Matt Barkley looked equally, if not more impressive, so he’s got to practice and play even better in the Eagles next preseason game if he is going to supplant Barkley.