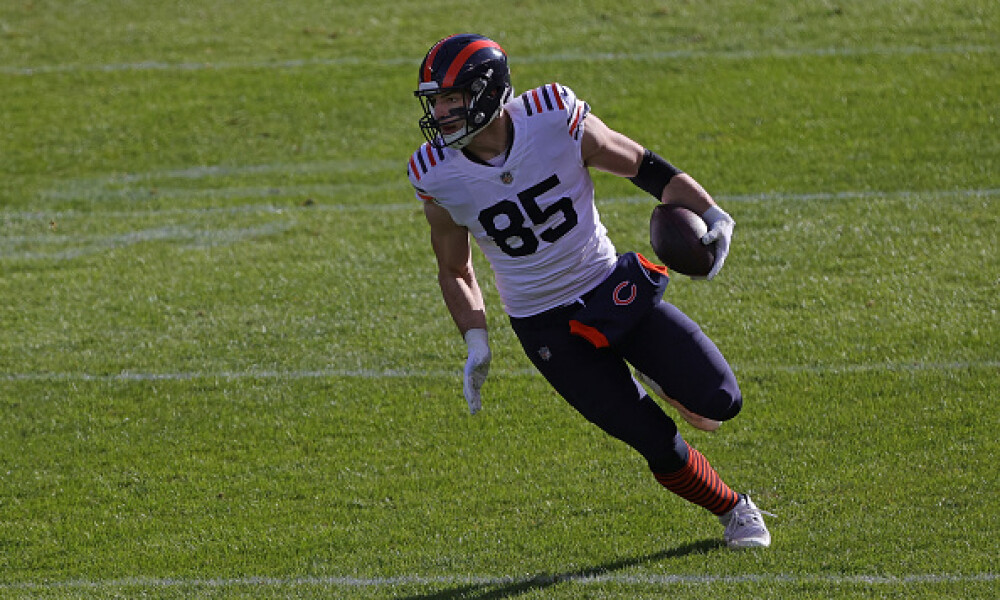 Like most rookie tight ends, Chicago’s Cole Kmet didn’t set the world on fire in his rookie season. He finished his rookie campaign with 28 receptions on 44 targets for 243 yards and two touchdowns. He came on strong at the end of the year, but Jimmy Graham’s presence was just enough to steal fantasy thunder from the former Notre Dame standout. However, as the year went on, Kmet started taking more of the work, but Graham maintained a stranglehold on the red zone opportunities. Can Kmet build on the second half of the 2020 season en route to a successful sophomore campaign? Let’s examine.

Over the first nine games of his rookie season, Kmet failed to see three targets in any game, and he had just one game with more than 20 receiving yards. However, over the final seven games of the year, he had three or more targets in all but one game, and even had six or more targets in four of his last five games! Furthermore, he had not one, not two, but three games over the final five weeks with 35 or more receiving yards. Yes, those aren’t glamorous numbers by any means, but his presence was growing, slowly but surely.

Over the course of the year, we can see how Kmet’s role and production drastically increased in the second half of the season.

In fact, his pace over the final seven games of the 2020 season extrapolated over a full 16 games would have made Kmet the TE22 on the year, putting him in the back end TE2 range. He was able to be more productive because he was gaining a larger role, and especially outside of the 20s, it was becoming Kmet’s show. The red zone is a different story, but you’ll see encouraging trend lines below, per RotoViz, for Kmet’s snap percentage and market share respectively.

Of tight ends with at least 40 targets last season, Kmet ranked just outside of the top ten in yards after catch per reception, per Pro Football Focus (PFF). Also, perhaps what is most impressive about Kmet’s rookie season is that he ranked second in contested catch rate (71.4%), per PFF. The only tight end he trailed was Las Vegas’ Darren Waller. Ever heard of him?

Additionally, per NFL’s Next Gen Stats, only six tight ends created more average separation than Kmet! Yes, less targets compared to other tight ends helped, but nonetheless, he was creating space for his quarterback to deliver the football. Robert Tonyan (4.2) and George Kittle (3.9) were notable names ahead of Kmet (3.6).

Unfortunately, Kmet couldn’t be at the top of the board in all categories. He ranked near the bottom in average depth of target (aDOT) and yards per route run, per PFF. Additionally, his pass blocking rate of 19.3-percent was the third-highest amongst tight ends with at least 40 targets. Obviously, this isn’t ideal, as you don’t want your tight end in fantasy staying back in to block, but despite the higher mark overall, it decreased slightly in the second half of the year, per PFF.

Silver linings, right? In 2021, I expect Kmet to block less than last year as he cements himself as the team’s TE1. Now, what will have to improve furthermore in 2021 is Chicago’s usage of the tight ends. The position garnered a 23 percent target share in 2020, per Sharp Football Stats, which is solid, but quantity wasn’t the larger issue. It was the quality of the targets. The average yards per attempt on passes to Chicago tight ends in 2020 was just 5.6 yards, which was the second-lowest mark in the NFL, per Sharp Football Stats. Don’t get me wrong, Kmet is no burner, but he certainly isn’t a guy that has to live at or in front of the first down marker. With not Mitch Trubisky under center this year, Kmet should be better off. Per RotoViz, Kmet had an 11.75 adjusted yards per attempt (AYA) mark with Nick Foles, compared to just 4.24 with Trubisky. Justin Fields will add a whole new dimension to the offense when he takes over, but until then Andy Dalton is at the helm, and here are some of the adjusted yards per attempt of some of Dalton’s tight ends through the years:

Kmet is currently the 18th tight end off the board in NFFC formats, placing him in the middle of the TE2 tier. The fact that Graham is still there caps Kmet’s upside a bit, especially if Graham continues to sap the important red zone work. Kmet’s presence here will grow, but he won’t be “the” tight end there until Graham is out of town. The fact that Graham is still there casts enough doubt on Kmet for 2021, that he will likely slide a bit in your drafts.

If you get a top tight end early, a la Travis Kelce, Darren Waller, etc., Kmet is the perfect TE2 to add to the roster later on. He has good hands and will be a reliable weapon for Fields or Dalton. At time of writing, Kmet is the TE17 in the rankings here at Fantasy Alarm, projected for 385 yards and three touchdowns. If you ask me, those projections are a bit conservative, and Kmet is the type of guy that could push into the back end of TE1 territory this year, especially if he garners more red zone work. I’m not ready to proclaim him as a guy you can draft to be your weekly starter, but he’s a high-upside TE2.