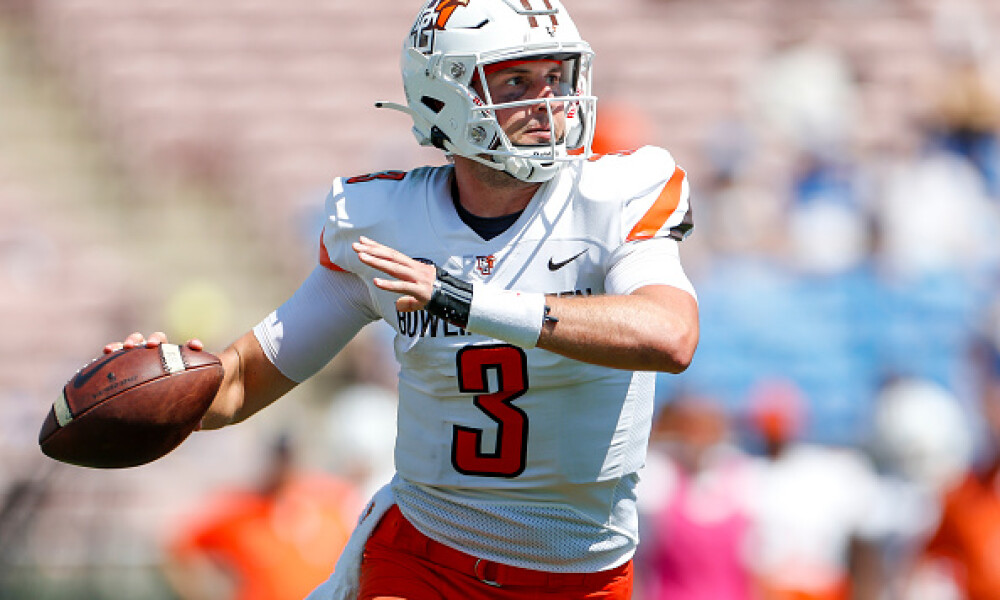 Good afternoon, FA Nation and we are back for more college football tonight! Week 13 of CFB DFS action begins with a two-game MACtion Wednesday slate on DraftKings and FanDuel. Both games kick off at 7pm ET as Ball State and Miami (OH) face off in the “Redbird Rivalry” with bowl eligibility on the line for both teams and we also have East Division second place Bowling Green facing division-leading Ohio.

Check out the college football betting odds, team totals, and over/unders below to get an idea of which games or teams to target in CFB DFS lineups. MAC football games are historically high scoring and full of action, so it should be another exciting evening of MACtion football! If you're building CFB DFS lineups tonight, be sure to check out our college football weekly projections and the CFB DFS lineup generator. So now we are ready to dive in and check out my top CFB DFS top picks and plays for Tuesday night, November 22nd!

After a couple of tough years, McDonald has taken a huge leap in 2022. In his previous three seasons, McDonald threw for 13 touchdowns and 13 interceptions total while this year, he has thrown 21 touchdowns and just five interceptions. He is coming off a huge game last week against Toledo where he went 20-for-36 for 395 yards, four touchdowns and one interception. Kurtis Rourke of Ohio is a game-time decision and is the top quarterback play of the slate. If Rourke is out, I have no problem rolling with the Falcons' signal-caller as Ohio is allowing a slate-worst 312.3 yards in the air per game.

No matter who is at quarterback for the RedHawks tonight, (Brett Gabbert or Aveon Smith) we know where they will be looking — for the team's alpha Hippenhammer. He leads the team in all three receiving categories with 46 catches for 856 yards and eight touchdowns and has gone over 100 yards and four total touchdowns in his last two games. With eight touchdowns on the season, Hippenhammer is on a roll and is viable in all formats tonight.

Hilaire is leader of the receiver room at Bowling Green. He was the WR1 going into last week’s Toledo game, but had put up modest numbers on the season with only 450 yards and four touchdowns in all of 2022. That all changed against Toledo as he went ballistic with one of the top wide receiver performances in college football this season, catching eight passes for 246 yards and two touchdowns. Will he repeat that performance? Chances are that he won’t as Ohio’s recently improved pass defense is still allowing an average of 312 passing yards per game. Hilaire will get plenty of chances as no other Falcons' receiver has surpassed 400 yards on the season.

Hunt is a redshirt freshman and a quarterback-turned-tight end. He has had a strong season and is in the running for All-MAC Tight End especially after last week’s career game of nine catches for 90 yards and a touchdown against Ohio. Hunt now has a total of 43 catches for 476 yards receiving and five touchdowns — the most among all MAC tight ends.

Patterson is the Falcons’ leading rusher on the season, carrying the ball 122 times for 543 yards and a score. He had 15 carries last week for a team-high 52 yards against Toledo and now has at least 15 carries in four of his last five games. Patterson also has over 50 yards rushing in all five previous contests and has three touchdowns in his last two games. With Rourke out for Ohio, we may actually see Bowling Green have a chance to run the ball in a positive game script which puts Patterson in play as a value.

Other Players to Consider: