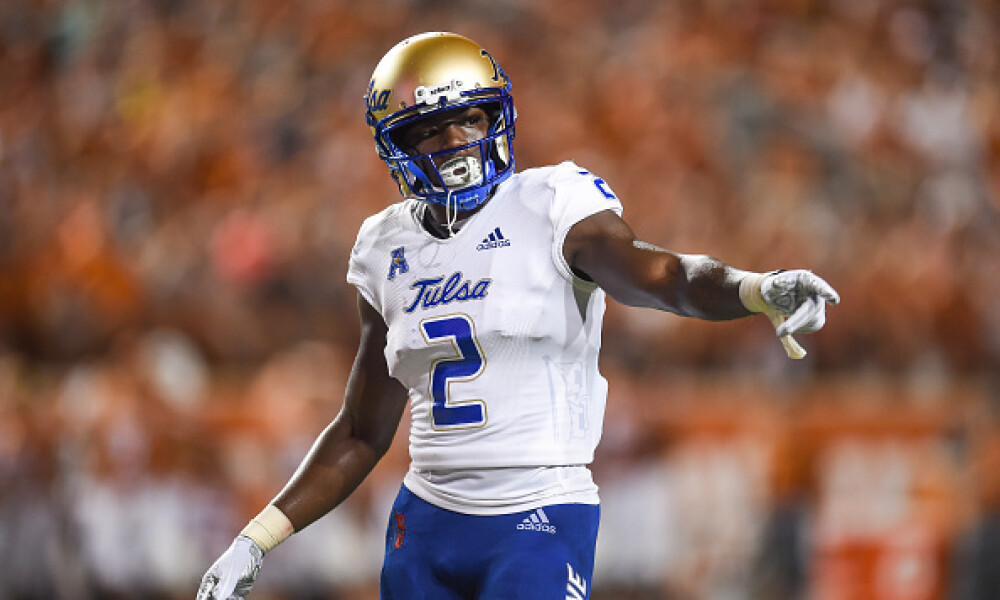 Good afternoon, FA Nation, and we are back for more college football tonight! Week 12 of CFB DFS action continues with a two-game Friday night slate on DraftKings and FanDuel. The first game kicks off at 9pm ET as South Florida travels to H.A. Stadium Tulsa to face Keylon Stokes and Tulsa and then at 9:45p ET Jalen Mayden and San Diego State visit Albuquerque as big road favorites against New Mexico. Check out the college football betting odds, team totals, and over/under's below to get an idea of which games or teams to target in CFB DFS lineups. If you're building CFB DFS lineups tonight, be sure to check out our college football weekly projections and the CFB DFS lineup generator. So now we are ready to dive in and check out my top CFB DFS top picks and plays for Friday night, November 18th

Mayden, who switched to safety coming into the season after falling to 4th on the Aztec QB depth chart and then back to QB, was just named the Mountain West Conference Offensive Player of the Week. He threw for 268 yards and three touchdowns, completing 17 of 22 passes as SDSU rallied to beat San Jose State 43-27 last week. SDSU had 268 passing yards, 157 rushing yards, 425 total yards, and a 206.14 pass efficiency rating under Mayden and now on the season, he is 91-for-138 for 1,253 yards and eight touchdowns. Mayden, who also has rushed for 171 yards with three touchdowns, ranks second in the MW in total offense yards per play (7.74, 20th in FBS), despite playing his first five games at safety. One more stat- the Aztecs are 4-1 since Mayden took over the offense and he is the only clear option at QB on tonight’s slate.

Stokes has come back to earth a little after starting the season with three straight 30+ DK fantasy point games. He is still, though, the stud WR on the slate and with another 1,000-yard season under his belt, he has put up at least 18 DK fantasy points cooled off a bit after his blazing-hot start to the year but has still produced 18-plus FP in seven of 10 games this year. Tonight, he gets the worst defense in the country. USF allows 288.0 yards in the air and 220.1 yards on the ground and Stokes sees an average of nine targets per game- monster night could be on tap for the Tulsa alpha that is 4th in the nation with 1.032 receiving yards.

Prince has had an up-and-down season. He missed five of the first six games of the season and has two good games compared to three mediocre. He did run for 231 yards in Week 8 against Temple (42 DK fantasy points), and we could very well see a repeat of that performance against the bad USF run defense. The Bulls defense is ranked 125th in RB fantasy points per game (33.3) and they are allowing 220.1 ground yards. Lock prince in tonight in all formats.

We may be seeing the passing of the torch to Battie as the top runner in the AAC soon. He now has three straight 100+ yard rushing performances and carried the ball a season-high 26 times against SMU last week. He will be facing a Tulsa defense that really isn’t much better than USF against the run. They are 123rd in rushing yards per game allowed (212.3) and it looks like the Bulls will be starting a true freshman at QB tonight which means a heavy workload on the horizon for Battie.

Jordan Byrd leads SDSU in rushing with 364 yards and three touchdowns, but Armstead (308 rushing yards on 47 carries) has taken over as the lead back for the past two games (29 total carries) since returning from an ankle injury. The weakness of the Lobos’ defense has been defending the run as they are allowing 163.7 rushing yards per game. While SDSU does continue to give carries to five different running backs, Armstead has proven to be the most productive. Against the weak Lobos’ rush defense, this may be the best opportunity for Armstead to reach the 100-yd mark for the first time as he is still getting about 60% of the team's carries since his return in Week 10.

Since Mayden took over as the starting QB five games ago Shavers and Mathews have become his favorite targets. Shavers has four plus receptions in four of those five games with a 5.0 target average. He is also averaging 82.4 yards receiving with two games over the 100-yard mark- 149 yards in Week 6 against Hawaii and 111 yards last week against San Jose State. If you need to save a few more dollars Mathews is sitting there with three straight weeks of at least four receptions, a touchdown, and a 16.3 DK fantasy point average. Both receivers are in play tonight in Cash/GPP and can even be used together in tournaments.