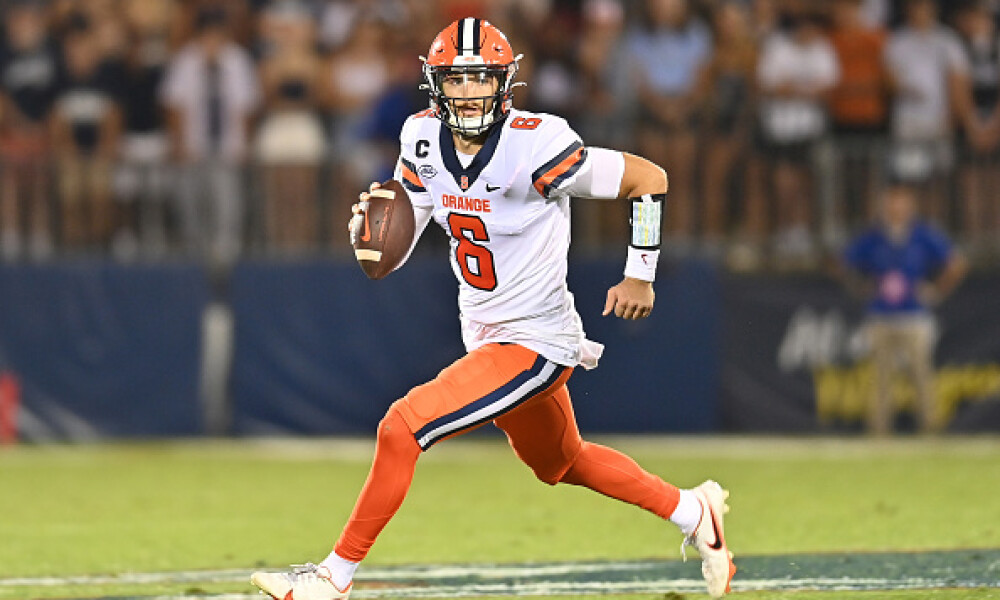 Syracuse is a slight favorite over Purdue in Week 3 with a game total hovering around 60 points. This matchup should feature plenty of offense on both sides and we're targeting the Orange side of things with Garrett Shrader. The Syracuse quarterback has gone over 300.5 combed passing and rushing yards in both games so far this season. He had 330 pass+rush yards in Week 1 against Louisville and then 316 against UConn last week. Shrader brings some dual-threat ability to the mix here. He had 94 rushing yards in that season opener after racking up 781 rushing yards last season. The Syracuse offense is much more uptempo than a year ago with a new offensive coordinator who uses a faster-paced attack. As for the matchup, Purdue's defense is a bit suspect and gave up 284 passing yards to Penn State's Sean Clifford earlier this year – though Clifford only ran for two yards.

This line is a tad too low for Nebraska's top receiver. Trey Palmer has reception totals of eight, four, and six in the first three games thus far as he's seeing a healthy amount of targets from QB Casey Thompson. The Nebraska offense is a pass-centric attack under former Pitt OC Mark Whipple and Palmer is benefiting from it. The LSU transfer is already a favorite target of Thompson's and he should be plenty involved this week. Nebraska is a double-digit underdog to Oklahoma and will likely be playing from behind while trying to keep pace with the Sooners' high-scoring offense. Since Nebraska's defense is struggling, this game should feature 25-30 points scored on both sides and Palmer should rack up receptions once again.

If you play CFB DFS, then you know how good John Rhys Plumlee has been this season on his rushing ability alone. The UCF dual-threat has rushed for 100 and 83 yards in the first two games this season. This is what Plumlee does and UCF is letting him run as much as he wants while headlining a high-scoring offense. When he was the QB for Ole Miss back in 2019, Plumlee went over this rushing total in six of eight starts. We can ignore the last two years when the Rebels moved him to wide receiver. Now that he's back under center and with a potent offense, Plumlee is running wild once again. This line may seem hefty for a quarterback, but it's actually low for someone who has the potential to rush for 100+ yards in any game. UCF is only eight-point favorites on the road at FAU here, so we should see Plumlee fully involved as a rusher.

At first glance, this line may seem low for Spencer Rattler when you see that he's completed 23 and 24 passes in the first two games this season. However, the South Carolina quarterback now gets a much tougher matchup against Georgia's intimidating defense. Even though the Bulldogs lost a ton of talent to the NFL Draft, their defense is still loaded with plenty more pro prospects on the 2022 unit. Georgia will pressure Rattler early and often while limiting the amount of completions and yardage through the air. The South Carolina offensive line is an issue this season and should be overmatched in this matchup. UGA only allowed three opposing QBs to complete 23 passes or more last year: Bryce Young, Will Levis, and Hendon Hooker. Two of those three (Young and Levis) are projected to be first-round picks in this year’s draft, and the other (Hooker) headlines an uptempo Tennessee offense. The trend has continued this season with Oregon's Bo Nix falling under 22.5 completions in the season opener against Georgia.