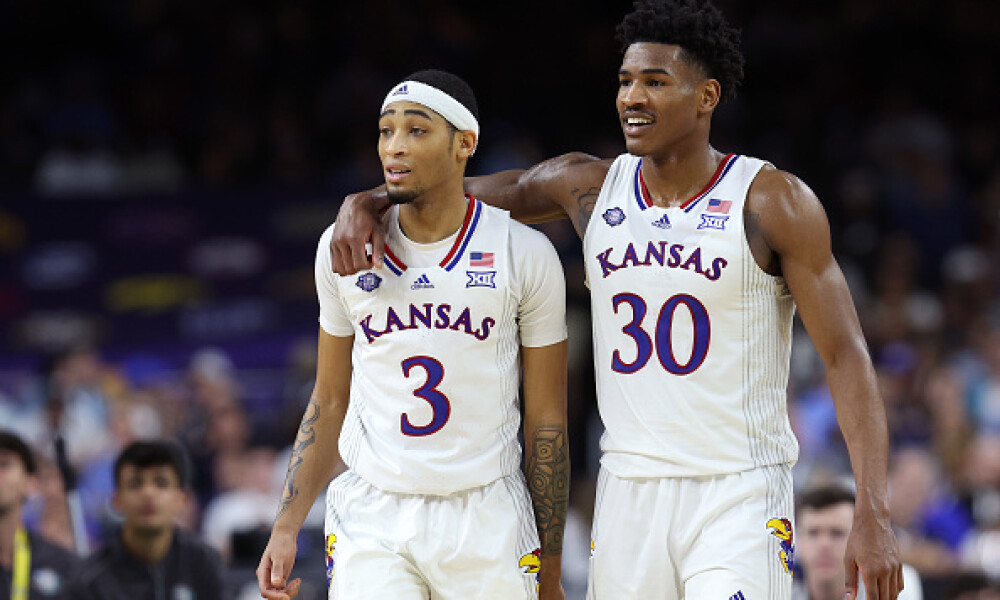 Welcome to National Championship Monday as the 2022 NCAA Tournament comes to a close and the college basketball season wraps up. It's been an entertaining March Madness, and we have one last CBB DFS slate to play. It's a one-game showdown slate with Kansas and North Carolina facing off after both survived their Final Four matchups. If you've played showdown slates, you know how they work – but let's review a couple of things.

DraftKings and FanDuel both have showdown slates, but they differ slightly in terms of roster construction. On FD, your roster includes an MVP (2X the points), a STAR (1.5X), a PRO (1.2X), and three Utility spots. The player salaries don't change for each of those roster spots. On DK, though, you get one Captain (1.5X) and then five Utility spots. The Captain's salary does get increased depending on who you roster there, compared to if you roster them in UTIL.

Alright, let's dive into which Kansas and North Carolina players to target in your DFS showdown lineups on Monday night. Good luck!

After being relatively quiet for much of the NCAA Tournament, Ochai Agbaji woke up in a big way with 21 points and six made three-pointers in the Final Four win. It’s about time the All-American and POY candidate played like it, and it’s clear he’s not scared off by the big stage. It’ll be hard to avoid Agbaji in lineups overall, but he’s a worthy captain/MVP in cash or GPP – especially at a cheaper FD price.

Armando Bacot was a beast down low for UNC in the Final Four win over Duke, racking up 21 rebounds and forcing Mark Williams/Theo John into foul trouble. That’s now two straight games with 20+ rebounds for the double-double machine. Unfortunately, though, Bacot’s ankle injury he suffered at the tail end of Saturday’s game is a worry for how effective he’ll be tonight. It makes him a risky play overall, but a high-upside captain/MVP pick that could easily win you a GPP.

Caleb Love was on fire in the Final Four victory with 28 points scored and a game-sealing three-pointer in the final moments. He’s now scored 23, 30 and 28 points in three of five NCAA Tournament games so far and has that scoring upside in any given night. The Kansas defense will surely be trying to stop Love and there’s a risk he doesn’t live up to the higher price tags. Still, the GPP ceiling is there once he catches fire.

Jalen Wilson can get overshadowed nationally by Agbaji, Martin, or McCormack, but he’s always capable of being Kansas’ top DFS performer in every game. At least we know Wilson’s floor is at a safe level due to his rebounding and ancillary stats outside of pure scoring. He has double-digit rebounds in four straight games and has 32 FD points or more in three of the last four outings. He’s a better captain/MVP pick than you might realize.

RJ Davis played a key role in UNC’s win on Saturday, stuffing the stat sheet with 18 points, seven rebounds and four assists. He has a slightly higher DFS floor than Caleb Love because of his all-around production, so the cash production is more trustworthy on this showdown slate. If the Kansas defense keys in on Love, Bacot and Manek, it’ll be up to Davis offensively to help pull off the upset. At least he’s playing with a ton of confidence and won’t back down from this matchup.

Christian Braun, as discussed with Jalen Wilson above, sometimes gets overlooked on this Kansas team with so much talent around him. Quietly, though, the Jayhawks' wing stuffs the stat sheet and is usually a trustworthy DFS cash play with all-around production. Braun's ceiling isn't great, but you can basically lock in 20-30 DFS points as a solid UTIL option in cash games.

If North Carolina wants to win the title, it’ll need Brady Manek to get back to being a 20+ PPG scorer. The senior power forward scored 28 and 26 points in the first two games of the Tournament but has been at 13, 19 and 14 points in the last three. That’s not bad, but Manek’s DFS ceiling is clearly much higher when he’s draining from three-point range as a 30-40 DFS-point performer.

Coming into the Final Four, Remy Martin was arguably Kansas’ best player throughout the NCAA Tournament. He was averaging 16.8 PPG in the first four matchups and was the Jayhawks’ biggest offensive threat more often than not. On Saturday, though, Martin took a backseat to Agbaji and others as he only posted three points on 1-for-5 shooting. It’s tough to tell how much he’ll be involved tonight, but the DFS ceiling is there for Martin to smash value if he’s active offensively.

If you watched the Final Four, then you got a great glimpse of David McCormack’s DFS ceiling when he’s dominating the paint offensively. He lit up Villanova for 25 points and nine rebounds and looked unstoppable at times. Though he likely won’t have similar success against Armando Bacot, the potential for another big performance is there if Bacot is limited with the ankle injury. Still, limit exposure to McCormack to GPPs because there’s a real bust risk when Kansas goes with small-ball lineups.

Leaky Black isn’t heavily involved in the UNC offense, but he usually does just enough in ancillary stats to return DFS value at affordable price tags. He’s put up 21 FD points or more in four of five NCAA Tournament games and should do the same tonight. In cash, Black is the ideal UTIL play to lock in 20 DFS points or more as he gives you a decent floor of production.