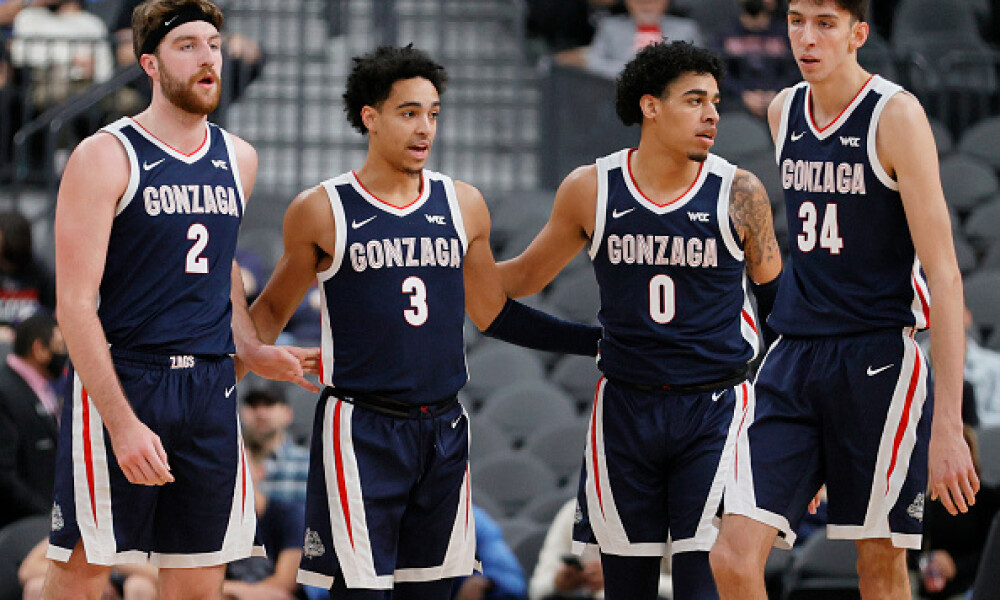 Could this finally be the year for Gonzaga to win it all? We asked ourselves the same thing last March before watching the undefeated Zags lose in the national title game. Though they’ve suffered a few losses already, this year’s Bulldogs still have plenty of talent to beat any team in the country – and they’ve already proven they can hang with the big boys. Mark Few’s squad earned the No. 1 overall seed in the NCAA Tournament after winning both the West Coast Conference regular-season and tournament title.

Gonzaga is headlined by Chet Holmgren, a lanky 7-foot freshman with the versatile skill-set that’ll make him a top NBA Draft pick this year. Don’t forget about two key holdovers from last season’s squad, as both Drew Timme and Andrew Nembhard are among the nation’s best at their respective positions. Overall, the Zags boast a top 10 offense and defense while playing at a super-fast pace. Even with Duke and Texas Tech in its bracket, another trip to the Final Four is certainly possible.

Former Gonzaga assistant coach Tommy Lloyd is now the lead guy at Arizona, and he’s got his current squad looking just as good as his old one. The Wildcats boast a high-scoring, fast-paced offense that can explode for 80-90 points on a regular basis. Sophomore wing Bennedict Mathurin was the Pac-12 Player of the Year and will be a future NBA lottery pick with pro-ready skill.

Outside of Mathurin, there’s plenty of talent up-and-down the roster that’ll have Arizona ready to contend for the title. Center Christian Koloko was the conference’s Defensive Player of the Year, big man Azuolas Tubelis is a versatile scorer, and guard Kerr Kriisa gives the team energy and attitude. The recent ankle injury for Kriisa is a slight worry, as he’s questionable to play in the first round, and his absence could impact how far the 'Cats go. It’s also important to note that Arizona would’ve been safely in the Tournament last year but had to sit out due to a postseason ban.

Stop me if you’ve heard this before: Kansas is one of the best teams in the country and can easily be the last team standing. Even with point guard transfer Remy Martin battling a knee injury for most of the year, head coach Bill Self has a top-tier program yet again. Ochai Agbaji, the Big 12 Player of the Year, headlines KU after averaging 19.7 points per game this season and being one of the country’s top overall scorers.

Outside of Agbaji, the Jayhawks’ roster is filled with experienced players who’ll be looking to avenge last season’s early exit from the bracket. That was evident in Kansas' Big 12 tournament title that locked up a No. 1 seed in the NCAA bracket. The big worries for Self's squad, though, are lack of depth and reliable ball-handling. While it hasn’t mattered much this season, those issues may arise further into March Madness.

The reigning national champs are again among the top squads this season and will be looking to be the first team to win back-to-back titles since Florida in 2006-07. Despite losing its two best players from last year, Baylor still has plenty of talent to have a top 10 offense and top 20 defense in the nation. Along with some key holdovers from last season (Adam Flagler and Matthew Mayer), the Bears brought in highly-rated freshmen (Kendall Brown and Jeremy Sochan) and a top-tier transfer (James Akinjo) to form a balanced roster.

They might not be as good as last year’s version, but Baylor should be taken seriously once again. However, an early exit from the Big 12 tournament is a bit concerning – especially since the Bears are dealing with injuries to two key role players, Jonathan Tchamwa Tchatchoua (out for season) and LJ Cryer (questionable to return). As the worst of the No. 1 seeds, Baylor gets a loaded region with Kentucky, Purdue and UCLA all looming.