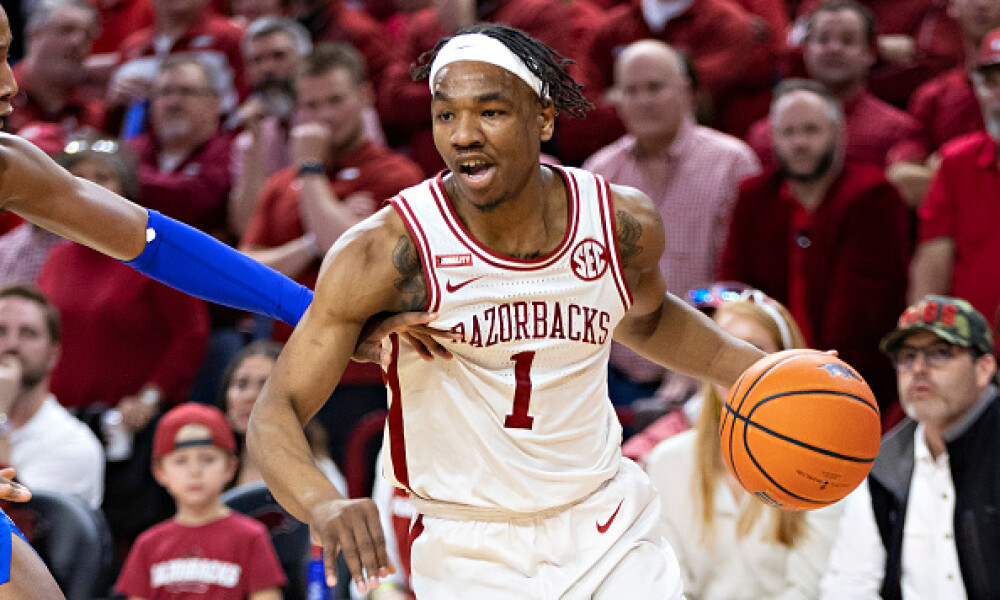 Back on January 8th, Arkansas had just lost five of its last six games and started out 0-3 against SEC competition. The Razorbacks then got red-hot with a 14-2 record over the final 16 regular-season games, including impressive wins over Kentucky, Auburn and Tennessee. Even those two losses were by a combined five points to Alabama and Tennessee. This team will enter the NCAA bracket feeling confident it can compete with anyone in the country, though a loss to Texas A&M in the SEC Tournament wasn't the best.

JD Notae is one of the best pure scorers in the country while Jaylin Williams is among the country’s top defensive big men. Eric Musselman’s squad also features plenty of veteran transfers with the competitive experience needed to pull off a string of March victories. This first-round matchup vs. Vermont is definitely a tough one, but the Razorbacks have the upside to beat Gonzaga and/or Duke to make the Final Four out of the West Region.

Anchored by the breakout season for Johnny Davis, the Badgers earned a share of the Big Ten regular season title and can be a real national championship contender. It’s been a surprising run for a Wisconsin squad that was picked to finish in the bottom-half of the conference back in November.

However, not many people saw Davis becoming an All-American caliber player who’s quickly risen up NBA Draft big boards. He’s the type of scorer and playmaker that can carry the Badgers deep into the bracket, much like Kemba Walker did for UConn years ago. The biggest worry, though, is if Wisconsin’s supporting cast can do its part when opposing defenses focus on shutting down Davis. The bracket sets up nicely for the Badgers until a matchup vs. Auburn in the Sweet 16.

UConn played in the collective shadow of Villanova and Providence in the Big East all year, but this team has the talent and roster make-up to reel off a few wins or more in the NCAA Tournament. Led by fifth-year senior point guard RJ Cole and one of the country’s best centers in Adama Sanogo, the Huskies have a good balance of top 40 offensive and defensive efficiencies.

An early-season win over Auburn shows Dan Hurley and Co. can compete with other top teams in the country as well. If it can get past Arkansas in the Round-of-32, the Huskies could very well beat Gonzaga to get into the Elite Eight and beyond. Connecticut likely has a bad taste in its mouth from last year’s first-round exit, and the motivation should be there to go further this time around – though New Mexico State is no slouch.

Iowa is a scary team to either pick for or against in the NCAA Tournament this year. The Hawkeyes boast a high-scoring, fast-paced offensive attack that can jump out to big leads in any given game. Led by breakout stud Keegan Murray, they regularly score 80-90 points per game and force opposing teams to match them. Iowa rode that top-5 offense to a Big Ten Tournament title and could very well carry the hot streak into the bracket.

At the same time, though, the Hawkeyes' defense isn’t consistent enough to trust against another top-tier scoring team that’s up for the uptempo challenge. A Sweet 16 matchup vs. Kansas would be a tough test, but Iowa has the pure offensive upside to keep its win streak going deep into March. While it’s hard to ignore last year’s disappointing second-round loss as a No. 2 seed, this season's version isn't as hyped-up and can fly under-the-radar as a No. 5 seed.

Illinois had a disappointing exit in last year’s NCAA Tournament as a No. 1 seed, but this season’s squad still has plenty of talent to make a deep run. Kofi Cockburn is one of the best centers in the country and he presents a physical mismatch in the paint against most teams. Trent Frazier and Andre Curbelo are also key holdovers from last season’s team and both have the upside to lead the Illini to a string of postseason wins.

Maybe Illinois is better suited to fly under-the-radar as a No. 4 seed rather than play as one of the Tournament favorites. If they get past a sneaky first-round matchup vs. No. 14 seed Chattanooga, the Illini would be up for an Arizona rematch in the eventual Sweet 16. If Curbelo, Cockburn and Frazier all get hot at the same time, that's as good a core as any in the country.