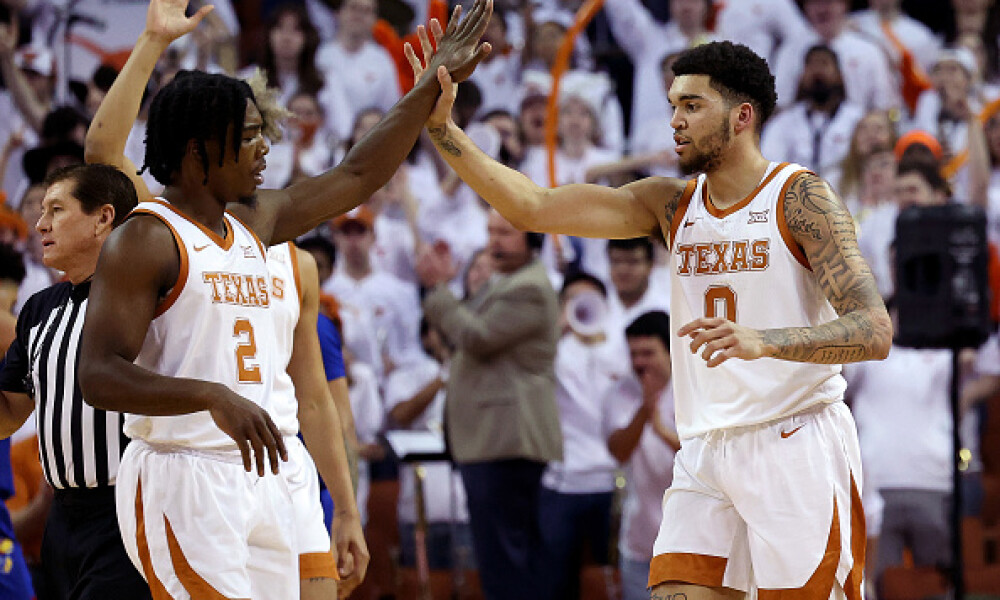 A year ago in the Tournament, Texas suffered an embarrassing upset to Abilene Christian in the first round and then parted ways with head coach Shaka Smart not long after. Now Chris Bead is in town and he’s hoping to bring the Longhorns back to national relevancy. Courtney Ramey and Andrew Jones are the main holdovers from last year’s squad, but Beard has rebuilt the roster via some key transfers like Marcus Carr, Timmy Allen and Christian Bishop.

There’s no denying the Longhorns’ overall collection of talent rivals any team in the country, while boasting a top-20 defense. That and Beard's Tournament experience could help aid a surprising run in the bracket. It’s a bit worrisome, though, that Texas has struggled to play consistently all season and only claim only one win over the other top teams in the Big 12 – going 1-5 against Kansas, Baylor and Texas Tech this season. A one-and-done exit from the Big 12 Tournament is a bad sign, but a late-January win over Tennessee shows the upside is there.

Despite losing Evan Mobley from last year’s Elite Eight squad, the Trojans have put together an impressive 26-win season with Evan’s brother taking on a bigger role. Big man Isaiah Mobley is a force inside and he was a candidate for Pac-12 Player of the Year. It’s not just him, though, as point-forward Drew Peterson is a nightly triple-double threat and Memphis transfer Boogie Ellis adds reliable ball-handling in the backcourt.

The lack of good wins hurt USC’s seeding in the bracket, but this team can make noise like it did a year ago. Head coach Andy Enfield is no stranger to deep March runs, as he’s now reached the Sweet 16 with two different schools (Florida Gulf Coast in 2013 being the other). It it beats a vulnerable Auburn team in the second round, look out for the Trojans to bust up brackets. Even still, Miami (FL) is a dangerous first-round opponent that'll test USC to be at its best.

Alabama has one of the weirdest Tournament resumes in college basketball this year, and it’s anyone’s guess as to how far it can go. The Crimson Tide boast impressive wins over top-tier squads like Gonzaga, Baylor, Tennessee, Houston and Arkansas. Their fast-paced, high-scoring offense forces opposing teams to keep up, which is a tall task when the Tide shooters are hot from three-point range.

However, ‘Bama has suffered some ugly losses to Missouri, Georgia and Iona and have come up short twice against both Auburn and Kentucky. Plus, it just got dealt a one-and-done exit from the SEC Tournament by Vanderbilt. An inconsistent defense is usually what costs Alabama in close-game scenarios when its own scoring can’t get the job done. The top-20 offense, though, makes this a dangerous matchup for anyone in the bracket.

Although Michigan State was never considered a top team nationally this season, never count out Tom Izzo in the Tournament! The Spartans’ longtime head coach always seems to get the best out his players when March rolls along, and a deep run in the Big Ten Tournament shows this team might be clicking at the right time. That wasn’t the case last year when Sparty failed to get past the First Four play-in games.

In 2019, though, Izzo’s squad was in the Final Four and among the best in the sport. While Michigan State doesn’t have one star playmaker, it’s a good blend of veterans and youngsters taking turns making an impact on both ends. Davidson is a dangerous first-round opponent and might be a popular upset pick. If it survives, though, MSU could easily beat Duke in the second round to bust brackets.