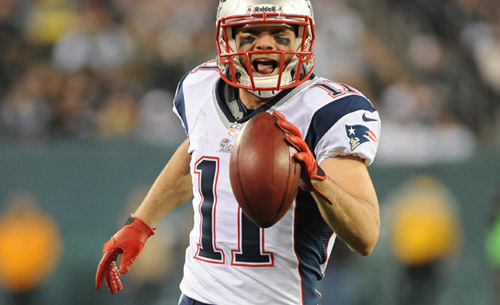 You probably don’t need me to tell you that the NFL is a passing man’s game these days, but just in case you’re an old school skeptic who still believes in the ground and pound, let me assure you that very few, if any, of the head coaches feel the same way. Through the first two weeks of the regular season there have been 2,248 pass attempts to just 1,694 rushing attempts (1.32 PA/RA) and only 11 of the 32 NFL teams have more rushes than they do passes. Of those 11 teams, only eight had a difference greater than 55-percent. If you haven’t been properly welcomed to the new school, please, allow me.

As a result, we have to continuously reiterate how important it is to not just looks at yards and touchdowns, but also at targets, target percentages and red zone looks. I also like to look at catch rate just to see who seems to be the most reliable, but there are always a few out there who, no matter how poor a catch rate they have, they remain the team’s No. 1 option. Yes, Vincent Jackson, I’m looking in your direction.

Now that we’re two weeks into the regular season, data is starting to accrue and we’re getting an initial look at the receiver pecking order in a variety of offenses. Some passing attacks are still sorting themselves out, but beyond the obvious No. 1’s out there, we’re establishing a hierarchy within each of the teams. For example, In Houston, we all knew DeAndre Hopkins was the No. 1, but despite the yardage disparity, it would appear that Cecil Shorts has the advantage for the No. 2 spot ahead of Nate Washington based on targets, target rate and red zone looks. In Carolina, without Kelvin Benjamin, tight end Greg Olsen is the No. 1 target for Cam Newton while receivers like Ted Ginn Jr. and Philly Brown follow. Even in Atlanta, we’re seeing that it’s Leonard Hankerson who seems to have Matt Ryan’s eye over Roddy White. Obviously it’s still early and a lot can change over the next few games, but when making key start/sit decisions or setting a DFS lineup, it’s always good to know who’s getting the attention and who isn’t.

In an effort to keep the closest watch possible, we’ll be looking at two tables moving forward. The first will be the previous week’s target leaders and the other will be a full-season targets leaderboard. More often than not, we won’t address the bigger names – the guys who should be starting for you week in and week out regardless of match-up. That means if you want to someone to fluff Julio Jones and tell you how great he is each week, you’re barking up the wrong tree. This is for the tough decisions. If you’re sitting Jones and he’s not hurt, you’re over-thinking the process.

Julian Edelman, WR NE – Yes, he’s an obvious no-brainer in PPR leagues, but besides the 19 targets, we’ve suddenly got two scores and over 40-percent of the red zone targets. One of the reasons Edelman’s value usually suffers in standard leagues is the lack of touchdowns. If he is going to start seeing a bigger slice of the pie inside the red zone, then his value in all formats is going to skyrockets. Tight end Rob Gronkowski is the obvious threat to that given his size, but if teams are going to lighten their coverage on Edelman inside the red zone, Tom Brady is going to take full advantage.

Michael Crabtree, WR OAK – While everyone was salivating over Amari Cooper in the preseason, I often suggested Crabtree as a late-round investment. Cooper is a solid deep threat, but Crabtree should be the guy who moves the chains. Derek Carr is going to lean on the veteran as the season progresses and could end up using him as a security blanket. He may not see many red zone looks, but he should be a solid PPR play given the targets and accrued yardage.

Leonard Hankerson, WR ATL – Did anyone mention to Roddy White that he was going to be phased out during Sunday’s game against the Giants? Not only would that be a tough pill for the veteran to swallow, but it seems doubtful that Hankerson over White is going to remain the pecking order for targets. Matt Ryan has a strong attachment to White, so it could have simply been a match-up issue. Don’t go blowing your waiver priority or FAAB budget on Hankerson just yet.

Eric Ebron, TE DET – While Ray Flowers will forever give me crap about hyping Ebron, you can’t deny the current trend right now. True to their word, the Lions have made him the No. 3 receiving option on this team and with an average of 7.5 targets per game, the second-year tight end has 96 total receiving yards and a touchdown per game. If you lost Jordan Cameron like I did this past week, Ebron should be a nice play against the Broncos this week.

As for the Overall Targets Leaderboard…

Jarvis Landry, MIA – Forget Kenny Stills. Forget Greg Jennings. And for the time being, forget Jordan Cameron. Landry is the go-to-guy for Ryan Tannehill and not only is he leading the league in target percentage with a 42.3-percent mark, but he’s also seeing 40-percent of the red zone targets. Similarly to what we were saying about Edelman up above, if Landry also continues to see a heavy dose of red zone work, he could be dangerous. Now all you have to do for this week is monitor Tannehill’s health.

Brandon Marshall, WR NYJ – It’s not often I get to highlight one of my Jets, so I’ll take this early-season opportunity to shout it out to the world that fantasy owners should sleep on Gang Green no more. Marshall will always be an injury risk, but so long as Ryan Fitzpatrick sits under center, Marshall should be an outstanding play all year. Eric Decker is the one who moves the chains, but Marshall is the total package with the speed to spread the field and the height to grab the red zone looks.

Larry Fitzgerald, WR ARI – Just a quick note to tell you not to forget about him. People let him go in drafts and I ended up grabbing him late in a number of leagues. He is the team’s No. 1 receiver and Carson Palmer will look to him early and often.

Jordan Reed, TE WAS – It’s a rare occurrence when a tight end leads a team in target percentage, but so far, it is Reed holding court in Washington as Kirk Cousins leans on the short-passing game. It’s tough to know how long this will last – Pierre Garcon is also seeing a number of targets and Reed has a VERY lengthy injury history. Still, while he’s playing, he’s proven to be a fantastic option thus far.

Heath Miller, TE PIT – As he worked through his knee surgery recovery last year, Miller showed flashes of the guy we once knew as Ben Roethlisberger’s favorite red zone target. Well, while we know that Big Ben and Antonio Brown have an unbelievable and seemingly unbreakable bond, Miller has garnered 62.5-percent of the red zone targets to Brown’s 25-percent through the first two games. Granted, right now it’s only a disparity of three targets, but if Miller continues to be a reliable threat in the red zone, Roethlisberger will continue to look his way.

Kyle Rudolph, TE MIN – Just like Reed, Rudolph is another decent pass-catching tight end whose career has been dramatically affected by injuries. He’s healthy right now and Teddy Bridgewater is starting to utilize him a lot more overall. If the heavy dose of red zone targets continue, Rudolph should be a solid play. Can’t say for sure that he’s going to be a guy for yardage as well, but I’ll happily take 50 yards if they come with a steady diet of touchdowns.

Vincent Jackson, WR TB -- The aforementioned Jackson typically has a lousy catch rate, yet quarterbacks go back to him time after time. With Mike Evans out and then serving as a decoy, VJax has gotten a real nice opportunity for red zone touches. If Jameis Winston starts to put his faith in the veteran wideout, then this trend might continue. Evans will eventually eat into the targets, but the drop -off here might not be as drastic as some may speculate.

Jacksonville Jaguars at New England Patriots – There is no doubt in my mind that the Patriots will win this game handily, but I could certainly see it being a fairly high-scoring game much in the way the Patriots’ game against the Bills went. Neither pass defense is particularly strong and for each team, the opposing quarterback average rating is right around 93. The Patriots’ weapons are obvious, though perhaps Aaron Dobson could be a sneaky low-cost option if he can see a similar number of targets as he saw last week. For the Jags, you’ve got Allen Robinson, who put up a rock solid game last week, Allen Hurns and the likely return of Marqise Lee. They can also go a little old school and utilize Marcedes Lewis. Vegas has the Pats as 13 ½ point favorites with an over/under of 47 ½, the highest of any game this week.