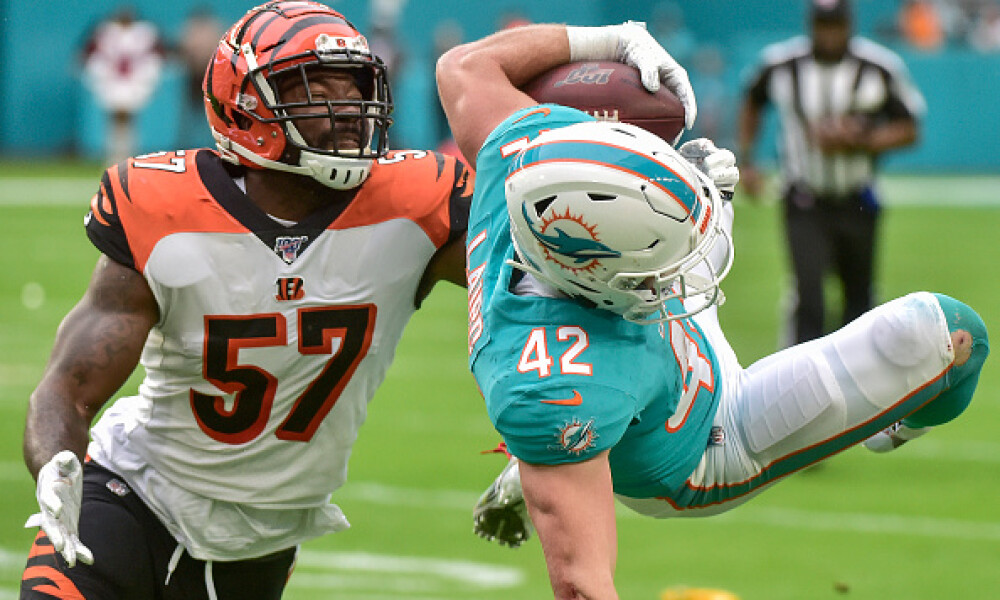 This is it, the end of bye week miseries. Plus, we head into the fantasy playoff season anon. Time to shore up those rosters with players that are trending upwards, and to cut loose those IDP who have ceased to provide value to your squad(s).

With Logan Wilson on IR due to shoulder issues, Pratt slides in to a potential three-down role in the Cincy defense. He collected nine total tackles (TT) in the Week 13 matchup against the visiting Charger offense, three of those being solos. He also picked up a forced fumble (FF) and fumble recovery (FR) last week. If he is a starter for the near future, his value goes up dramatically and he becomes a must add.

Lynch put up a huge stat line against the Lions in Week 13: nine TT (six solo), with one for a loss of yards (TFL), two sacks, a QB hit/hurry (QH), and mimicking Pratt above, a FF and a FR. This burst of IDP goodness could be short lived, as he saw a steep increase in defensive snaps played due to Anthony Barr and Eric Kendricks being sidelined, so keep an eye on the injury front plays out heading into Week 14 in the Thursday night game.

Collecting a whopping 13 TT in Week 13 against the visiting Eagles puts him square in the sights of waiver wire shoppers. Beware of the back injury that is limiting his practice through Wednesday, so that if you pick him up, be ready to zag after that zig move and find a replacement LB to swap in before Sunday’s kickoff.

Kirksey returned to action as though he had not missed a few games due to injury. He was a full-time participant on the field for the Texan defense, racking up seven TT (five solo) with yet another pass deflection/defense (PD), his sixth on the season, a career high. He is a fine hybrid LB, as he offers decent tackle production with big play potential tossed in.

Roche is being used as an edge rusher by the Giants, and has collected two sacks in his last four games, along with 19 TT (12 solo). Not overwhelming numbers but being able to get LB type production out of a DL in ESPN leagues has value.

Wormley is an average tackle producer, but has put up 3.5 sacks over the past two weeks. He gets to face off against the Vikings and then the Titans over the next couple of weeks, which provides him with an extended opportunity to shine for the Steeler defense.

The Buccaneer tackle is not much use if your league values tackle production from the DL slot, but the increased sack totals this year for the veteran do carry some cachet in big play scoring schemes. He was credited with another pair of sacks against the host Falcons last week, as well as a couple of QH. Tag on four TT (two solo, two TFL) and he is redeveloping a useful IDP presence.

Jones is certainly not as visible as Arik Armstead, and certainly not at the level of Nick Bosa on the DL for San Fran, but he is quietly and unobtrusively becoming a value at DT in leagues that mandate using a defensive tackle in your IDP lineup. He has 12 TT over his past two contests and forced a fumble in his last game against the host Seahawks.

Kearse should easily eclipse 100 TT this season, barring anything unforeseen occurring in the final contests of the 2021 season. He added nine TT (eight solo, two TFL) against the host Saints in Week 3, along with an INT and a PD. His production continues to improve as the weeks flow along, so this would be a fine time to consider adding him to replace an underperforming DB.

Neal was called upon to fill in for an injured Jamal Adams, and with Adams now out for the season, look for him to build on the five TT effort he put up against the 49ers in an expanded role.

He is coming off a fantastic 11 TT effort against the visiting Washington Football Team. There is some doubt that kind of value will carry forward, but a LB that qualifies as a DB is an asset to consider adding for depth, if not as a guaranteed starter going forward. Another double digit tackle effort…maybe that makes for starter material.

The Chief defense has been playing better lately, and Ward has been a part of that resurgence. He amassed eight TT against the visiting Broncos, along with a PD. He has been mostly a full-time DB in four of the last five KC games, and in those efforts, has accumulated 27 TT over that period, with 5 PD and an INT.

Ogletree’s utility took a major downturn with the return to action of Roquan Smith. His playing time took a hit, even with his starting status in place, and he was credited with a mere single solo tackle against the visiting Cardinals. The Bears also seem intrigued with the play of Joel Iyiegbuniwe in the linebacking corps.

Miller was seen as an important pickup by the Rams for their playoff run. Instead, he has gone three contests without a sack registered to his credit. He also has picked up a mere nine TT over his time with LA. The writing was sorta on the wall before the trade, as he was not rolling up huge tackle numbers and had dried up in the sack category, too. Name recognition is no reason to afford him a continuing roster spot on your fantasy squad.

Allen has recently cooled off, going without a sack for the past four games, and having three of four games with limited tackle production. One or two off games can be overlooked but this speaks of a trend that does not bode well for fantasy playoff success.

Jenkins’ star has certainly dimmed of late, which could just be due to his 33-year-old body wearing down with continued weekly action. He has put up more than four TT just once over the past six weeks, with minimal big play action during that time. He has not been much of a big-play league target over his recent history, in any event, so the lack of tackles makes him a liability for fantasy owners.

Remember, the first team listed is the one to use your IDPs against. Do not go crazy, and play a LB5 against the Bengals or Lions but certainly you will do well if you own a top LB, DE or S on the Browns, or a leading DE or S on the Ravens that you can plug in this week, for the most part.