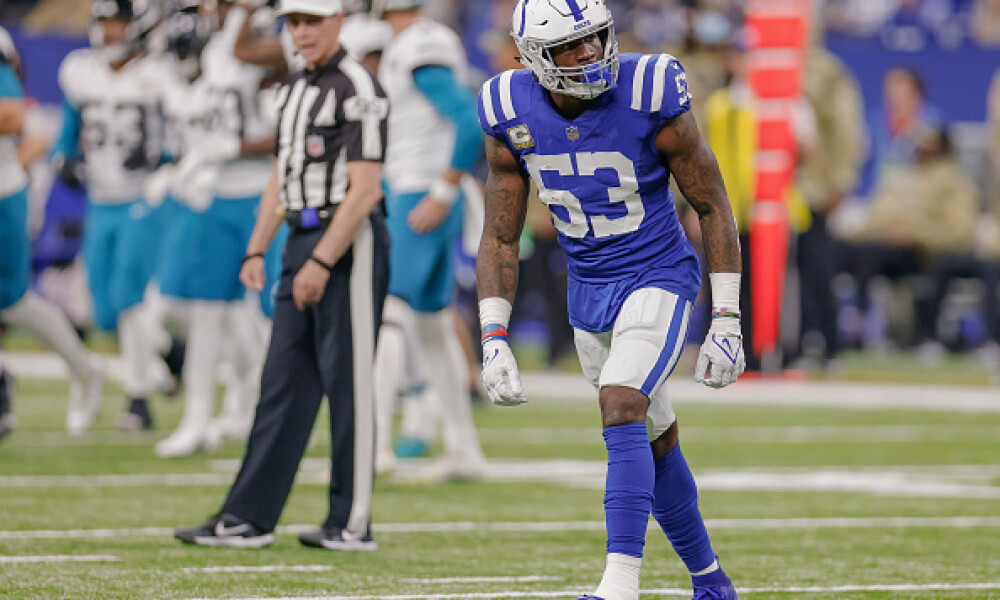 As the fantasy season winds down and heads toward the playoffs, it seems unfair that the schedule makers have dropped two weeks of four-team byes on us and our football rosters. All the more reason to act fast to snap up those IDP that can assist you in racking up a couple more weeks of victories, right? Most of the rising profiles below are in the defensive secondary, but the LB and DE ranks are not bereft of suggested options.

After writing the Colt LB off last week, he decided to prove his mettle with a huge game against the visiting 2020/21 champ Bucs, racking up 15 total tackles (TT), 12 of those solos. He also forced a fumble (FF) and defended a pass (PD) as part of his return to star status. If he was dropped in your league (not that this article would have had anything to do with that decision), add him to your roster for the stretch run.

His productive outing in Week 12 built on a fine performance in the previous contest. After picking up 11 TT in Week 10 (Week 11 was the Rams’ bye week), he upped the total with 13 TT (six solo) against the host Packers. One of those tackles was for a loss of yards, as well (TFL). The next matchup against the Jags is not great, but then Week 14 and 15 look better for ILB fantasy production.

Profiled in the IDP Report back in Week 2, he dropped off the fantasy radar for a period, before putting up a strong big play game in Week 12 against the host Texans: two sacks, two QB hits/hurries (QH), an INT and a PD. He also contributed three TT (all solo, two TFL). Week 13 finds him taking on the Eagles who give up the most points to DEs in fantasy.

Murray’s lowest tackle production over his last three games is eight TT (which he has achieved twice, with an 11 TT effort on the books for Week 11 against the Titans). He is back to being an every down DB, and while he does not offer much big play value, he is a top tackle producer if that floats your boat in your league’s scoring scheme.

With the Detroit former starting nickel back A.J. Parker now on IR, Marlowe will be seeing significant time on the field for the Lions. He amassed 10 TT on Thanksgiving Day against the Bears (six solo) while also contributing a PD. He should continue to see regular playing time going forward, which given the Detroit scoring dearth, will provide him with ample opportunity to produce fantasy stats.

He was profiled in Week 2, same as Mr. Franklin-Myers above (must have been a fine week for IDP profiling), and deserves recognition again. Coming off the COVID list to put up an eight TT effort (five solo), with an couple big plays tossed in for good measure, he should continue to be a useful DB as the playoffs loom. The big plays were an INT and PD, by the way.

Rookie CBs are frequently fine fantasy performers, and Surtain has been tested this season by opposing offenses. He had a nice Week 12 against the visiting Chargers, on both the tackle front with five TT (four solo) and big plays with two INT and PD each. He also contributed a TD but that is not exactly an item to be relied on going forward.

Baker boosted his profile with a seven sack season in 2020, but has only collected one of those this season, back in Week 5. He is also a hit and miss tackle producer, with a good game followed by a poor outing. High playing time with spotty or non-existent fantasy point production makes for a droppable IDP.

No sacks in the past five contests, and only one game with more than three tackles, Crosby’s stock has fallen off the fantasy map. He is still seeing plenty of snaps on defense, so there is potential for rebound. This is a dangerous game to play with the playoffs on the horizon, however, and there are better, steadier DEs to populate your lineup with as the season reaches the final contests.

None to write about this week, except those identified in the Injury Report below.

Remember, the first team listed is the one to use your IDPs against. Do not go crazy, and play a DE5 against the Eagles or a LB4/5 against the host Lions, but certainly you will do well if you own a top LB in the Baltimore/Pittsburgh game that you can plug in this week, for the most part.