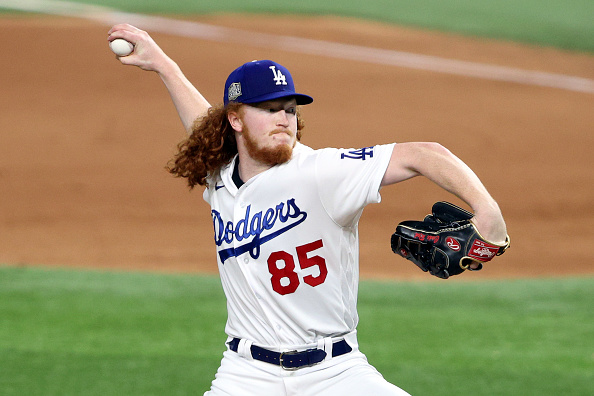 Unlike Week 1, we have a slate of two-start arms to choose among in the coming scoring period. Are they wonderful choices? No, not exactly. There are a small band that look to be useful in both of their trips to the mound, and naturally, a group in the bottom tier that it is suggested you avoid despite the lure of two starts.

These three starting pitchers are the only hurlers that are suggested as pure two-start options that if you have them on your roster, you insert them for both their trips to toe the rubber. May and Smyly both pitch for teams that are likely to produce sufficient offensive production to give them a chance to notch a victory. Shoemaker gets a nod here based on his prior production as well as facing what are anticipated as being slightly less daunting opponents in the form of the Tigers and Mariners.

Montgomery was healthy in 2020, and the hope is that trend continues into this season. He has a great first matchup with the Orioles coming to Yankee Stadium, and the trip to Tampa is not terrible road venue to pitch in. He offers strikeout per inning potential, and his FIP indicates that the inflated 5.11 ERA last season was bad luck based.

As a fantasy owner, you want to employ Marquez when he is away from Coors Field, which occurs during his second start against San Francisco. Then again, the Diamondbacks could help pad his K totals. Despite being a Rockie stater, Marquez has produced useful ratio stats to go with the strikeouts, and is the Colorado SP to own and plug into your rotation…especially in road contests.

Carlos Carrasco ’s hamstring injury puts Peterson firmly in the Met rotation during the opening part of 2021, and his skill set is such that he is worthy of an add to your roster. While some negative regression in his ratio stats is expected, he should still be a sub-4 ERA arm to rely on, and should produce a good mix of groundballs to limit the potential for longball damage off opponents’ bats. A K/9 around 8.0-8.2 is not out of the question.

It seems to be a continuing trend that the A’s develop pitching at an amazing rate, and Montas, coming off a 2019 suspension, seems poised to continue that trend. Of course, if he were to pitch more than 100 innings in 2021, that too would be a bonus. He offers the possibility of superb 10+ K/9 production and useful ratio stats, you just have to cross your fingers that he offers enough IP to matter in your fantasy rotation.

With the first start of Week 2 in Miami, the Cardinal righthander has a chance to continue to build on his road dominance. Both his Week 2 matchups play up his strikeout production skills. His run as a SP may be short-lived if Kwang Hyun Kim is ready to rejoin the rotation in Week 3 as expected, so grab his starts while they are on the table.

Rodon deserves consideration due to the matchups he has in his two-start week, with games against the Mariners in a pitcher’s park on the road and taking on the division-rival Royals at home. If the matchups are not favorable, however, he is a prototypical back of the rotation arm that could easily lose his SP status, with his lack of control and accompanying inflated ratio stats.

Wacha has struggled to put it together since a good effort in 2018, but has moved to a team that can right his ship if any can. Of course, he may end up relegated to an opener role for the Rays, which will diminish his value significantly. His pitch repertoire is such that he needs to be spot on in his command and control or suffer severe consequences, as his pitches lack the 10 mph delta that keeps batters off-balance consistently. Facing a pair of division rivals in Boston and New York is a less than desirable set of games in this two-start week, but he gets the Yankees at home at least.

The second-year big leaguer muddled through his rookie season last year, although his underlying metrics indicate that his inflated 4.94 ERA over his 11 2020 appearances (nine starts) was a tad unlucky and with breaks, he can be an average ratio producer. He should provide a strikeout per inning, always a desirable trait in a pitcher. His matchups are not horrible, although his backing offense is nothing to write home about, either. Temper expectations but he could be useful this scoring period with his pair of starts on tap.

The final middle tier SP has a pair of favorable venues in line for his two Week 2 appearances, starting off the week in San Diego, then getting the Rockies on the road instead of at Coors Field. He offers decent if not great K opportunities, which serves as an additional plus on the pitching ledger. Without the favorable parks, though, he is best relegated to the lower tier most weeks.

As it will be throughout the season, this final tier contains those starters that despite having the lure of taking the baseball twice in the upcoming scoring period are not worthy of inserting into your fantasy rotation. Their performances will likely drag down your ratio stats, while not providing any significant point production, whether you participate in head-to-head or roto league systems. Just say no, and leave them on the bench or the waiver wire/free agent pool. Occasionally, a pitcher here will be worth a gamble for one of his two scheduled appearances, but there are none so qualified this week.

The Mariners are not a great team, but their park is suited to supporting a groundball inducing arm such as this 24-year-old southpaw. He is not a total write-off in the strikeout department, either, with an potential to produce an 8+ K/9 rate. With his ability to force batters to drive the ball into the dirt he is an option whether on the road or as in this contest, at home.

Garcia was tagged to join the Astro rotation coming out of spring, continuing his quick advancement to the majors that began in 2020. This is his chance to demonstrate he belongs in the rotation, while Jake Odoizzi ramps up following his late spring signing, and his arsenal of pitches will serve him well so long as he can continue to keep hitters off-balance with his change and slider/cutter complementing his mid-90s fastball.

Gant is penciled in as the fifth starter for the Cardinals to open the season, with the starting rotation dinged up coming out of spring training. He has been pitching effectively out of the bullpen since 2019 began, and brings an average strikeout potential to his owners, with good ratio stat ability. Pitching in Miami is a plus for this appearance.

The move to the AL for the 30-year-old righty did not work out well in 2020, but the Tigers are hoping his former success with the Braves will return. This start will be his second in a row against the Cleveland team, so take a glance at how he fared in Week 1 before jumping in with both feet here. His fastball velocity has been declining for years now, so do not expect many Ks. When Teheran is the best streaming option on a day’s slate, it may behoove avoiding streaming that day.

Heading into his third season with the Mariners, there are those who are anticipating continued development by the Japanese import. The addition of a cutter to his pitch arsenal last season should continue to improve his K potential, and assist in increasing his ratio stat values. If he is languishing on your league’s wire, make the smart move and add him now. He is coming off a QS to open his season, so expect the claims to be numerous where he is still available.

The knock on Richards was not that he lacked skills, but that he was unable to stay healthy enough consistently to put those abilities to use. Pitching in Camden Yards is not an ideal location to practice the art of pitching, to be sure, but early on in the season is a better time to take to the hill in Baltimore. He saw a downturn in his K production last season, and at 33-years of age, his strikeout potential may begin to fade, but he should still provide good counting and ratio stats while he is able to toe the rubber.