Sean Mitchell breaks down all of the training camp battles around the NFL and what they mean for fantasy football. 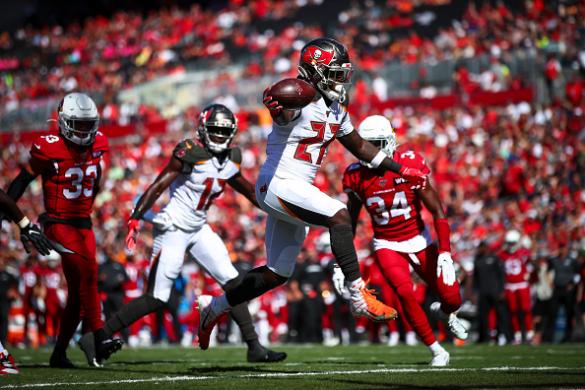 Welcome back to another Fantasy Alarm NFL Training Camp Battles Article for the 2020 season! We have less than ONE week until we have NFL football again, and we couldn’t be more pumped at Fantasy Alarm to get you guys winnings in all your leagues and in DFS! With that said, this article will feature a few of the more popular battles in camp still going, along with a few of the major cuts we have seen as well! Let’s get it going!

It was made clear this morning who the Washington Football Team will NOT be starting in their backfield this season, and that is none other than the legend himself – Mr. Adrian Peterson . Early this AM, reports came out like a flock of seagulls about the release of Peterson from the team. This made a couple things clear. This Washington Football team is ready to move on with their full youth movement, and also, they really like Antonio Gibson, who looks to be the clear-cut number one back in this backfield, with Bryce Love and JD McKissic manning the back-up duties, as it may seem in some capacity. Peyton Barber is still thrown into this mix somehow and could just be a depth-chart filler for now in a back-up to the back-up role. Needless to say, though, Gibson seems to be their guy now with Guice gone, and Peterson getting the cut, despite the glaring fact that Gibson has only recorded THIRTY-THREE carries in college total. Gibson’s ADP (average draft position) had already started to sky-rocket with the Guice news, now it seems that Gibson could potentially be in RB2 waters, if not a fringe RB1 status with his “CMC-like attributes”, as Coach Ron Rivera has already mentioned in recent memory.

I believe we all were on notice that Cam Newton would more than likely be the starting QB for the Patriots come Week 1 the minute he signed with them, and who knows if Stidham hadn’t got injured in the last couple weeks if there would have even been much of a battle if so, but with all that said, Newton was not only named the starting QB earlier this week, but he was ALSO named a team captain as well. The Pats got their guy, and they are going all in with Newton this season. Another familiar name that is now NOT a part of this team anymore is the veteran WR the Pats traded a Round 2 pick for just last season in Mahomed Sanu. Sanu was informed on the 1st of September that he would no longer be a part of the Patriots football team, a pretty bizarre shake-up that literally no one saw coming right before the season starts. Lastly, for the RB situation in New England. As it looked prior to last week, starting RB Sony Michel e’s status for Week 1 had been looking up in the air, however, he has now safely practiced last week, and Damien Harris’s status for Week 1 doesn’t look so good as he has sustained what is being reported as a hand injury. Looks like it will be Sony and James White as the main RBs once again for the Pats!

Just when we all thought that Ronald Jones III was the “guy” in Tampa Bay after the Buccaneers parted ways with Peyton Barber after last season….things started happening. First, they drafted stud Vanderbilt RB Ke’Shawn Vaughn. Ok, we all thought, that’s not a big issue as Arians still has favored RoJo up to this point. Guess what happened then? The Buccaneers sign veteran RB Shady McCoy onto the team. Again, this didn’t exactly move the needle…a ton, right? It is Shady McCoy, the guy who barely stepped a foot on the field for the Super Bowl Champion Kansas City Chiefs last season. No big deal, we said, and so we thought…..that was until earlier this week. Leonard Fournette is shockingly “CUT” from the Jacksonville Jaguars. A day or so later, Uncle Lenny is UFA after no team filed a claim for him during the waiver period. GUESS WHO HAD THE MOST INTEREST AFTEWARDS? You guessed it, the Tampa Buccaneers. Then it happened. Fournette to the Buccaneers on 1-year deal worth $3.5M with a base of $2M with performance incentives. Still yet, Bruce Arians still “claims” that RoJo is still the “guy” even with the Fournette signing. How much do we believe him??? We have seen this rodeo many times from Arians, so take those TB running backs with a grain of salt! To top it off, Fournette tweeted an updated picture of him – wearing the same jersey number of Ronald Jones III in a Buccs jersey! Oh, the Drama!

The Marquez Valdes-Scantling reports have been coming out a plenty here lately, and with the Packers not exactly having an abundance of WRs on their roster after Devante Adams and 2nd year player in Alan Lazard, MVS could be that late-round flier that has maybe already worked himself into quite a major role once again here for the Packers in 2020. Most importantly, MVS has had a solid camp, and the WRs coach Jason Vrabel has praised him, as well as Head Coach Matt LaFleur, and more recently and abundantly, starting QB Aaron Rodgers , who likely already has previous rapport with MVS from last season, in which was when MVS was a bestball darling that didn’t exactly pan out so to say. The way things are looking however, some are very certain that this could potentially be “THE” break-out season for Valdez-Scantling, and to say that the Packers couldn’t use another solid wide-out to step up is quite the understatement. Interesting watch here with MVS, and I would almost…almost recommend spending that last pick on him if you have deeper benches or are looking to be different in your drafts with his training camp praise, and potential out-look for 2020.

Not exactly much at all has changed in this battle for the starting gig between Marlon Mack and newly drafted stud Jonathan Taylor. Most reports are still stating exactly what Head Coach Frank Reich stated at the beginning of camp, that Marlon Mack is the starter, and he reiterated it just a few days ago stating “Marlon Mack is the Colts starter at RB. He has earned that, and he looks fantastic.” Another report states Reich saying the RB tandem, so it seems “will be a 1-1 punch.” No one yet knows exactly what split this may turn into, but for me it is looking more and more like a RBBC with Marlon Mack seeing like 60% to Taylor’s 40%, with the occasional Hines stint on passing downs, at least that is what it seems like for the early part of the season. Many are still in high-belief that Taylor will up-root Mack of his starting duty, but it seems pretty clear that the ole Ball Coach doesn’t exactly see eye-to-eye with this logic.

Reich reiterates that Marlon Mack is the Colts starter at RB. "He's earned that, and he looks fantastic."

Reich reiterates RB will be a “1-1 punch.” Notes Marlon Mack has been “fantastic” during camp. #Colts also anticipate a major contribution from Jonathan Taylor this year.

Of course, what would this piece be with mentioning the Leonard Fournette move, but not noting what will happen in the situation that he left behind in Jacksonville? So, with that said, it has been quite imminent that the Jags have reported that veteran shifty RB Chris Thompson has been one of the stars of the red zone drills during camp, and this was when Fournette was still a Jaguar. However, most of the recent reports have been stating that Devine Ozigbo has been getting quite the “raving reviews at camp” so far. This should be a very interesting backfield situation to watch, as Head Coach Doug Marrone stated, “we have multiple running backs who can play all three downs,” thus not exactly giving any glimpse into how this backfield will operate. At least not yet. Most are buying up a lot of late round Ryquell Armstead , and most are also buying up Chris Thompson (however his ADP has risen quite a bit now), but I don’t believe many are buying up any last round picks with Devine Ozigbo. With season-long drafts being held all over the place in the coming days, should be an interesting camp to watch if any of these RBs gets any potential “more love” than any of the others.

Raving reviews for Ozigbo in camp ????

Training Camp is extremely important and the battles that take place can have a major impact on playing time when the regular season starts. You can learn more about how important these battles are in the Draft Guide with: 2020 NFL Draft Guide: Training Camp Matters, written by Justin Vreeland.

#FANation do you want to be a #FAmily member for life???

Purchase the 2020 NFL Pro Package today for JUST $74.97 & get entered into a drawing to WIN a LIFETIME subscription to Fantasy Alarm!

Click Here to Purchase & Gain Entry to the Sweepstakes